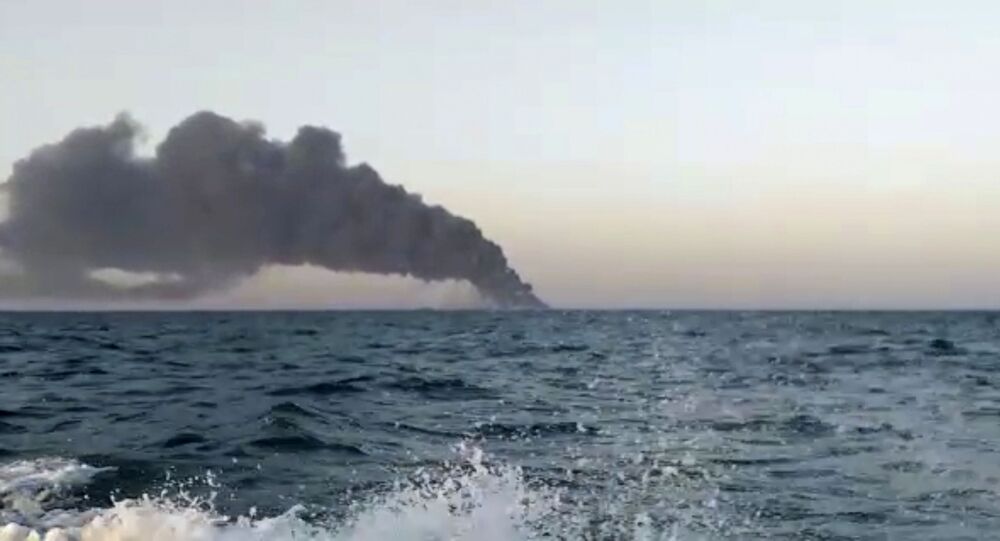 Around 20 people received minor burn injuries, but no one was seriously hurt in the incident before the burning vessel was evacuated, a government spokesman told the Tasnim news agency, adding that the cause of the fire was still being investigated.

One of the Iranian Navy’s largest support vessels, the Kharg, sank on Tuesday in the Gulf of Oman.
A fire had broken out on the 650 ft. cargo ship, designed to resupply ships at sea, during a training exercise.

The blaze, believed to have been triggered by a “fault in one of its systems”, prompted a swift evacuation of the entire crew of 400 and trainees.

Iranian Navy ship '#kharg' sinks in the Gulf of Oman. The largest Iranian naval vessel could not be saved. pic.twitter.com/XpnDueMWLv

Efforts by firefighters to put out the blaze proved to be futile. The ship sank 20 hours later near the port of Jask.
According to a government spokesman cited by Tasnim news agency, some 20 people received minor burn injuries. It was added that a probe was still underway.

​The incident follows a spate of mutual recriminations between Iran and Israel over attacks on cargo ships and military vessels. The verbal allegations over sea incidents fed into the already fraught relations between the adversaries.

In April, Iran accused Israel of being behind a blast using underwater mines that damaged its military vessel MV Saviz in the Red Sea.

#Iran - #Israel : Iranian media just shared photos from inside the Saviz Iranian ship that has been attacked by Israel in the Red Sea by limpet mines. Media said an unknown helicopter flew over the ship hours before the Israeli attack. Via @m_khalili93 pic.twitter.com/7kkuGpDWMV

Earlier, an Israeli cargo vessel sailing from Tanzania to India was hit by a missile in the Arabian Sea, prompting Israeli security services to point the finger of blame at Tehran.

Reported (unconfirmed) photos from the damage caused to the #Israel|i owned MV Helios Ray in the Gulf of Oman. pic.twitter.com/71iLePn0DG

​Another Israeli-owned cargo vessel, the MV Helios Ray, was also hit by explosions while sailing off the coast of the UAE in February.

While Israel made no official accusation at the time, unsourced reports from the Israeli media outlets Haaretz and Channel 13 at the time claimed Iran knew that the vessel was owned by an Israeli businessman.