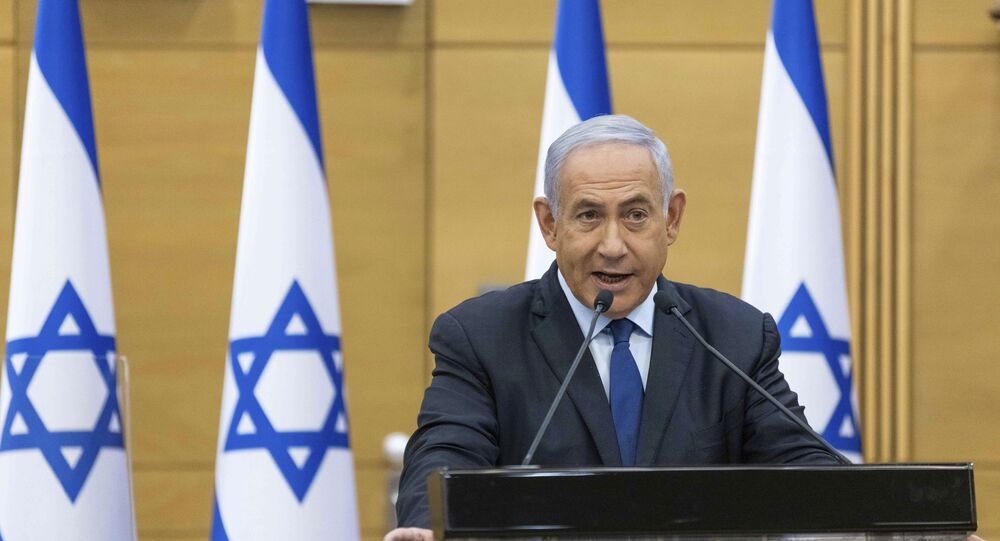 The chairman of the Israeli right-wing Yamina party announced Sunday he is ready to create a new coalition government after Netanyahu failed to do so. The Israeli prime minister has witnessed growing opposition to his rule recently, as large protests have been taking place over his COVID-19 response and corruption accusations.

Israeli prime minister Benjamin Netanyahu has fired back at efforts aimed at ousting him from power, warning about the dangers of forming a "left-wing government" and expressing doubt that anybody in Israel "would vote for [Naftali] Bennet", the chairman of the right-wing Yamina party who wants to create a coalition government with Yair Lapid, the leader of the centrist Yesh Atid party.

"There is not a single person in the country who would vote for Naftali Bennett [...]. This is the fraud of the century! Instead of forming a dangerous left-wing government, immediately after the end of Lapid's mandate, it is possible to form a good right-wing government for Israel", Netanyahu said in a televised address on Sunday evening.

Israeli President Reuven Rivlin gave Lapid a mandate to form a coalition government following the results of the Knesset elections. The president noted that it can be either a government that Lapid will lead as the prime minister or a government headed by another lawmaker with Lapid serving as an alternative prime minister.

“It's my intention to do my utmost in order to form a national unity government along with my friend Yair Lapid, so that, God willing, together we can save the country from a tailspin and return Israel to its course," Bennet said on Sunday.

© AP Photo / Tsafrir Abayov
In this Monday, Feb. 16, 2015 file photo, Naftali Bennett, leader of the Jewish Home party, speaks during an interview to The Associated Press in Jerusalem.

In order to form a government, the party-winner of the parliamentary elections must gain the support of a minimum of 61 lawmakers out of 120. The failure to create a government has led to four elections in just two years in Israel. If they don't succeed in doing so this time, Israel may see another general election in the fall.

Bennet said he made the decision in order to prevent a fifth consecutive election and that there was "no feasible way" for the hard-line wing to form a governing majority.

What is ironic about it is that Bennet previously served as a senior aide to Netanyahu and is himself a rather hard-line politician. For instance, he advocates for further annexation of the West Bank territories -  a view which he shares with the current PM, who accused his former aide of betraying Israel's right-wing. Netanyahu has long bragged about what he called "extending [Israel's] sovereignty" to parts of the West Bank.

© REUTERS / TOM BRENNER
Israel's Prime Minister Benjamin Netanyahu stands with U.S. President Donald Trump after signing the Abraham Accords, normalizing relations between Israel and some of its Middle East neighbors, in a strategic realignment of Middle Eastern countries against Iran, on the South Lawn of the White House in Washington, U.S., September 15, 2020.

However, Netanyahu warned of the impact if such a coalition succeeded in forming a government without him.

“What will it do for Israel’s deterrence? How will we look in the eyes of our enemies? What will they do in Iran and in Gaza? What will they say in the halls of government in Washington?", he said.

Netanyahu, as the leader of the right-wing Likud party that won the recent election, was expected to form a coalition with his allies, but failed to do so. Desperately, he even tried to attract an Islamist Arab party, but faced opposition from another small party with a clear anti-Arab agenda.

The recent year has been turbulent for the Israeli PM, who is under investigation over a corruption scandal. This includes allegations that he obtained luxurious gifts from various businessmen, passed legislation favoring a major newspaper and backed loosening regulation of telecom giant Beseq in return for favorable coverage.

The chief prosecutor in Netanyahu's hearing said that the prime minister "used the power of his office to advance his personal desires", according to the Times of Israel.

Speculation had previously emerged that with the change of power in Washington, the new administration of Joe Biden would be "colder" toward the Israeli government. Former US President Donald Trump enjoyed a warm relationship with Netanyahu, which сulminated in announcing Jerusalem as the "undivisible capital of Israel" and in unveiling the Trump administration's Middle East peace plan, dubbed "the deal of the century". The deal envisaged creating a demilitarized Palestinian state, with Israel retaining control over the West Bank and keeping Jerusalem as its "undivided capital".

The deal triggered a backlash from the Palestinian leadership and the international community, with the UN denouncing the "dangerous" plan as a violation of international law.