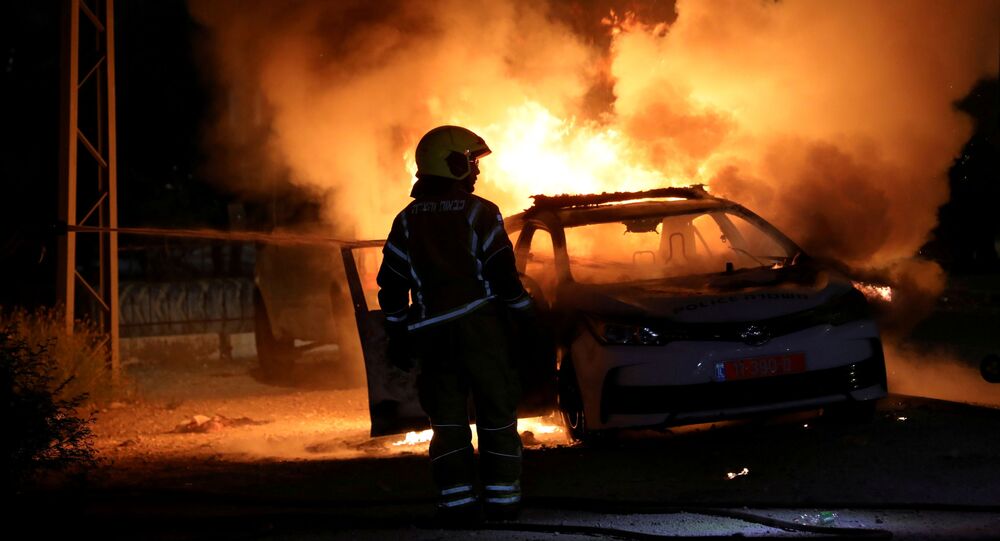 Israel’s mixed Jewish-Arab cities have seen some heavy rioting this month with protesters throwing rocks at police after tensions boiled over between Palestinian militants and the Israeli army.

Israel's Prime Minister Benjamin Netanyahu sought to block TikTok during this month’s riots in Jewish-Arab cities over claims that Israeli Arabs were using the platform to incite protests, according to a report by the Haaretz, citing sources familiar with the situation.

The proposal was reportedly raised in at least two separate government meetings as tensions rose in the cities of Acre and Lod, prompting authorities to introduce a state of emergency in the latter, which is located just east of Tel Aviv. However, the proposal was rejected by Attorney General Avichai Mendelblit and Israeli’s security service Shin Bet, the report says.

© REUTERS / CORINNA KERN
sraeli Border Police force members stand near burning tires by one of the entrances to the Arab-Jewish town of Lod, Israel May 13, 2021

Justice Ministry insiders confirmed the claims that were initially made by the Walla news website, saying that the relevant proposal had indeed been filed by Netanyahu via the National Security Council.

“The prime minister had asked to look for ways to deal with the inciting video clips on TikTok that, according to police and security officials, had contributed to the spread of violence,” Netanyahu’s office said.

According to Netanyahu’s office, he considered blocking TikTok but not access to Facebook or Instagram, as it was initially suggested by Walla. The Hebrew-language news portal suggested that a proposal to ban Facebook, TikTok, and Instagram was raised by defence officials “out of the understanding that social media was exacerbating everything happening in the country.”

No social media platforms faced restrictions from the Netanyahu government in the end, despite a rise in violence in numerous cities as Israeli-Palestinian tensions escalated this month. The sides clashed as Israel restricted non-vaccinated Palestinians from visiting the Al-Aqsa Mosque in the Old City during the holy celebrations of Ramadan, as well as in anticipation of a decision by Israel's Supreme Court to evict six Palestinian families from their homes in East Jerusalem’s Arab district of Sheikh Jarrah.

Following weeks of tensions, Israeli forces and Hamas exchanged airstrikes, leading to over 200 deaths until the Egypt-backed ceasefire was reached last week, coming into effect on 21 May 2021.