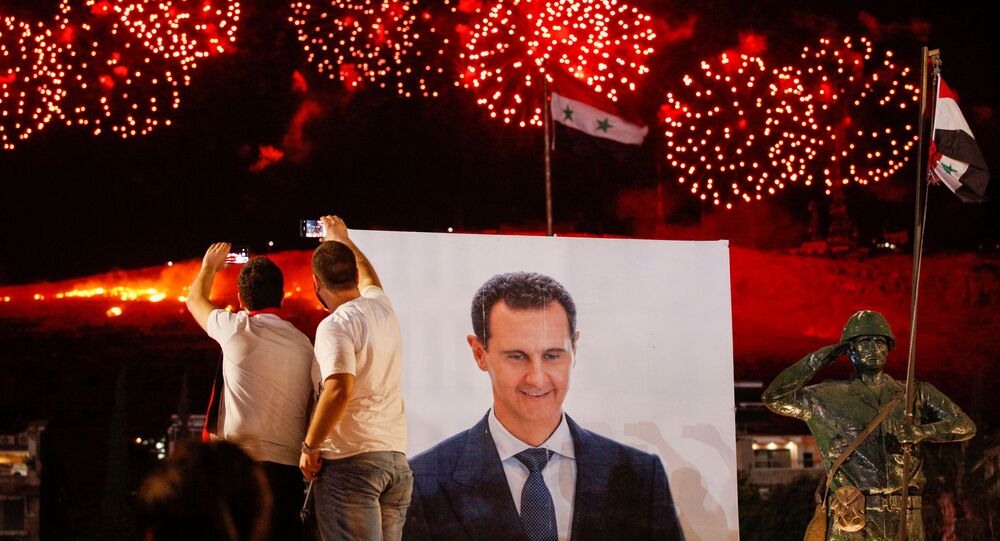 Earlier, the US along with four of its closest allies condemned the May 26 presidential election in Syria, alleging that the event was illegitimate. A statement released by the group stated the election "will neither be free nor fair."

Syrian President Bashar al-Assad has won a fourth term in office after managing to clinch 95.1% of the vote, Hammouda Youssef Sabbagh, who serves as the speaker of the Syrian parliament, revealed on Thursday.

Sabbagh specified in a statement that Assad gained another seven-year term in office after having obtained approximately 14,239,140 votes, an amount that effectively saw the official "receiving an absolute majority."

The speaker also indicated that the presidential election saw a turnout that reached over 78%, and that the two other candidates, former state minister Abdallah Salloum Abdallah and fellow candidate Mahmud Merhi had received 1.5% and 3.3% of the vote, respectively.

Merhi later commented that Assad's presidential victory was a natural win. Assad has maintained the presidency since 2000.

© REUTERS / Omar Sanadiki
Supporters of of Syria's President Bashar al-Assad celebrate after the results of the presidential election announced that he won a fourth term in office, in Damascus, Syria, May 27, 2021.

Reacting to the win, Assad issued a statement through his campaign, thanking Syrians "for their high sense of nationalism and their notable participation" in the election.

"Thank you to all Syrians for their high sense of nationalism and their notable participation.... for the future of Syria's children and its youth let's start from tomorrow our campaign of work to build hope and build Syria," he wrote.

In the wake of the election announcement, video footage has emerged from Syria showing celebratory fireworks and cheering crowds.

The election ran from 7 a.m. to midnight on Wednesday, with more than 12,000 polling stations made available to participating individuals. Members of Russia's parliamentary delegation relayed to Sputnik that the electoral process was held without any violations and in line with international rules.

Vladimir Churov, ambassador-at-large for the Russian Foreign Ministry, previously told Sputnik that terrorism and international obstruction were the main threats to the Syrian election process. In fact, one source revealed that an explosion erupted near a polling station in Syria's Daraa, but that no one appeared to have been hurt by the blast.

As election proceedings were unfolding, the US, UK, France, Germany and Italy issued a joint statement denouncing the vote because it reportedly did not fall in line with UN Security Council Resolution 2254.

It's worth nothing that while the five UN members cited Resolution 2254 to condemn the Syrian election, the same members have also failed to prevent terrorist attacks committed by Daesh or al-Nusra, as well as calling for parties to support Syria's "unity, independence [and] territorial integrity." Both acts are outlined under the same 2015 resolution.

Assad to Run for President of Syria in 2021 Election, Parliament Speaker Says

Video: Thousands of Assad Supporters March Out in Damascus Ahead of Presidential Election