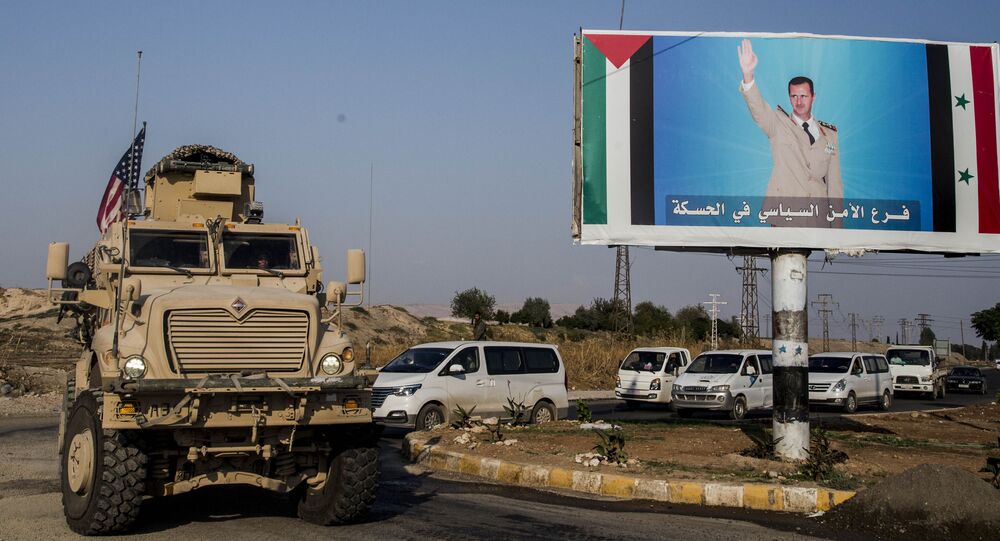 Path to Re-Election: Majority of Syrians Believe Assad is Only Leader Able to Confront the West

Although the Syrian Civil War has left nearly 400,000 people dead and millions more displaced, Bashar al-Assad is perceived as the person most fit to stand at the helm of the war-torn country. And a local expert says he is likely to win the presidential race on Wednesday.

In 2014, when Daesh* was at its peak in Syria, President Bashar al-Assad won the presidential race, getting some 90 percent of the vote. On Wednesday, when Syrians head back to polling stations, he is expected to claim victory once again.

In Assad We Trust

Taleb Ibrahim, a Damascus-based political analyst, says the outcome of the upcoming elections is rather predictable and this stems from the vast majority of the population being supportive of their president and them wanting him stay in power.

"He is seen as a leader who steered the country through this complicated war. He is also perceived as a person who can stand firm in the face of western agenda and he is the one who can help the Syrian people to regain stability and peace".

© AP Photo / Hassan Ammar
In this Dec. 5, 2016 file photo, Syrian army soldiers fire their weapons during a battle with rebel fighters at the Ramouseh front line, east of Aleppo, Syria.

Assad's critics think otherwise. Even before the eruption of the Arab Spring in Syria in March 2011, Assad was often slammed for "oppressing" and "suppressing" the country's minorities and opposition and for failing to implement much-needed social and economic reforms.

When a civil war broke out, he was rebuked for not leaving office to make room for the fragmented opposition to take over, for cracking down on protesters, and for instigating a war that has killed nearly 400,000 people and displaced millions of others.

In the West, he was also criticised for not adhering to democratic processes and for relying on Iran and Russia to fight against elements considered legitimate by the international community, even though Damascus has repeatedly stressed that it was fighting extremists.

His achievements, on the other hand, have largely gone unnoticed. He was the one to connect the country to the internet, he opened multiple banks, made education available to the masses, introduced a series of economic reforms, and gave the opposition an opportunity to express itself.

For the West, says Ibrahim, this was not enough.

"The West will always be opposing anyone, who doesn't fit their agenda. They will be throwing their support behind a dictator if that dictator fits their goals. Syria doesn't dance to the tunes of the US and this is the reason it will always be slammed".

© REUTERS / OMAR SANADIKI
A poster depciting Syria's President Bashar al-Assad is pictured in front of damaged buildings, ahead of the May 26 presidential election, in Homs, Syria May 23, 2021.

The eruption of the civil war in Syria hasn't made relations between Syria and the West any better. During a decade of severe fighting, the US bombed Syria on a number of occasions. During the Barack Obama and later Donald Trump administrations, the strikes were carried out in response to alleged chemical weapons attacks by the Syrian Army.

Now, under President Joe Biden the assaults are aimed at curbing the Iranian militias positioned in the area.

But Ibrahim says the American pressure isn't limited to the military realm. It has also been economic.

"I don't remember a time when Syria was not under western sanctions. This is part and parcel of their policy that punishes those who don't abide by their rules. We have seen it in Iraq, Iran, Russia, and other places. Syria is not an exception".

The most recent wave of sanctions on Syria was imposed at the beginning of May, when US President Biden decided to extend Washington's pressure on Damascus, including the freezing assets of certain people and a ban on certain good and services into the country.

Ibrahim is certain that this policy will not change with time and this is also why he thinks Syria needs to work closely with various international players to make sure its interests are maintained.

"Syria needs to bolster its cooperation with Russia, Iran, China, and other players. It needs to create an economic and military bloc with these countries because this is the only way forward".