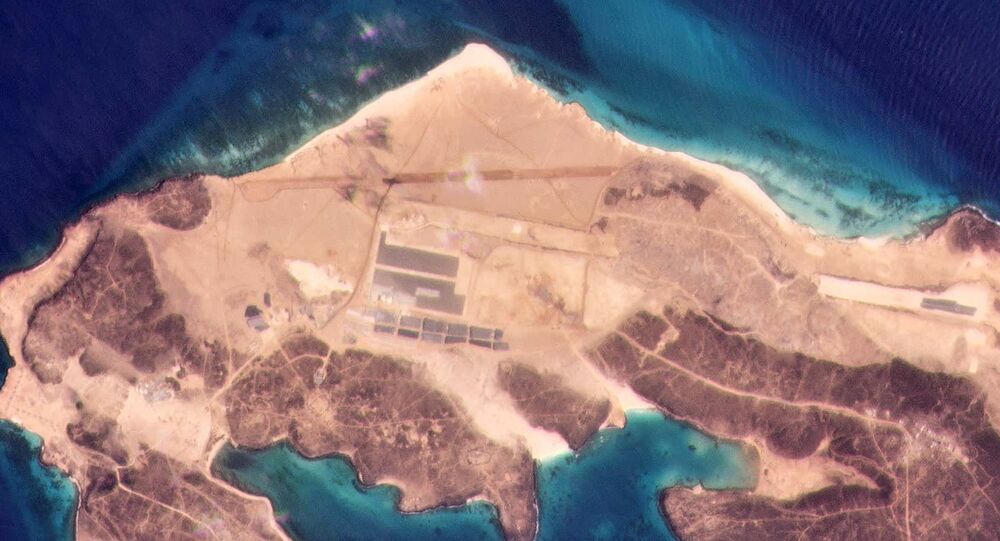 Who is Behind the Mysterious Air Base on This Yemeni Island?

Perim Island, also known as Mayyun in Arabic, is located just 3.5 kilometres from Yemen’s mainland and is widely recognised for its crucial strategic position. The island was lost to Houthi militants during the 2015 takeover but later retaken by Gulf Arab forces backing the government of Abdrabbuh Mansur Hadi.

Construction of a mysterious air base, spotted on Yemen’s volcanic Perim Island, is being linked to the United Arab Emirates, according to anonymous officials cited by AP.

Satellite images from Planet Labs Inc. revealed in late February 2021 that a 1.8-kilometre runway was being constructed on the island, which sits in the middle of Bab Al Mandeb Strait, a vital maritime route used for commercial and energy shipments. New images obtained by the AP show that by 18 May the work appears to be completed, with three hangers constructed just south of the runaway.

Curiously, it looks like the storm-caused sand residues on the new runway of most likely 🇦🇪UAE Perim Air Base, 🇾🇪#Yemen, were still there over 2 weeks later (20 May).

Also, notice the changes in the piles in the south of the image: first full, then emptier, then replenished. https://t.co/sfg1DWjewI pic.twitter.com/FsnpLDCE4u

An earlier effort to build a modern airbase at Perim dates back to 2016, shortly after it was recaptured from the Houthi rebels. But the project was halted in 2017 over difficulties associated with the island’s volcanic nature. The previous efforts were generally linked to the UAE over the shipping data, AP says, with unnamed Yemeni officials from the Hadi government claiming that Abu Dhabi is now behind the construction of the new runaway at a separate site.

Yemeni officials from the military say they were not publicly authorised to discuss the construction with the journalists, but admit that in recent weeks Emiratis transported troops, equipment and weapons to the Perim.

In 2019, the UAE, which alongside Saudi Arabia is backing the Hadi government, announced that it has ended its military involvement in Yemen and was withdrawing troops from an international campaign fighting the Houthi movement.

According to Jeremy Binnie from Janes intelligence company, that has been following the construction works on the Perim island for years, the project, if indeed carried out by the UAE, seems to have shown “a longer-term strategic aim to establish a relatively permanent presence”.

It was also suggested by the military officials that the UAE and Hadi have been at loggerheads recently over Abu Dhabi’s demand to sign a lease agreement for Perim for 20 years, but there has been no official confirmation of such a request.

What is clear, however, is that those in control of the unclaimed Perim airbase will be easily allowed to launch airstrikes into Yemen or conduct operations in the Gulf of Aden, while projecting power into the strait.

The UAE Embassy in the US and Abu Dhabi officials have not confirmed this report.

Yemen has been hard hit by an armed civil conflict since late 2014, after rebel Houthi forces took over the country’s largest city Sanaa, driving the internationally recognised government of Abdrabbuh Mansur Hadi into exile. The international coalition led by Saudi Arabia has been fighting the movement ever since.