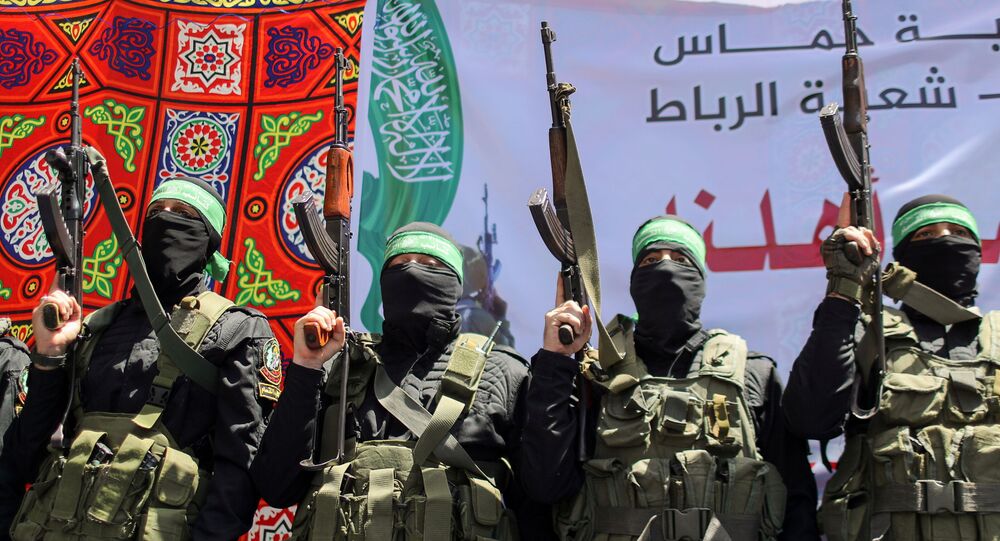 Ezzat El-Reshiq, a member of Hamas' Political Bureau, urged Israel to end what he described as violations in Jerusalem and to tackle damages from the Gaza bombardment following a ceasefire that entered into force on Friday.

“It is true the battle ends today but [Israeli Prime Minister Benjamin] Netanyahu and the whole world should know that our hands are on the trigger and we will continue to grow the capabilities of this resistance”, El-Reshiq told Reuters.

He added that Hamas also calls for protecting the Al-Aqsa Mosque in Jerusalem and stopping the eviction of several Palestinian families from their homes in East Jerusalem, something that El-Reshiq dubbed “a red line”.

© AFP 2021 / MENAHEM KAHANA
Israeli soldiers fire a 155mm self-propelled howitzer towards targets in the Gaza Strip from their position near the southern Israeli city of Sderot on May 12, 2021. - Israel's Defence Minister Benny Gantz vowed more attacks on Hamas and other Palestinian militant groups in Gaza to bring "total, long-term quiet" before considering a ceasefire.

"What comes after the battle of 'Sword of Jerusalem' is not like what came before because the Palestinian people backed the resistance and know that the resistance is what will liberate their land and protect their holy sites”, the Hamas member pointed out.

The remarks followed the office of Israeli Prime Minister Benjamin Netanyahu on Thursday confirming that the country’s Security Cabinet had voted unanimously “to accept the Egyptian initiative on a bilateral ceasefire” between Tel Aviv and the Palestinian militant group Hamas, which took effect at 23:00 GMT on Thursday.

The Israeli Foreign Ministry said in a statement that the ceasefire agreement was clinched without preconditions, also touting the Israel Defence Forces' (IDF) “significant achievements in the operation, some of which are unprecedented”.

The ceasefire was hailed by UN Secretary-General Antonio Guterres, who called on “all sides to observe” the truce, which came after an 11-day escalation of hostilities between the IDF and Hamas, the worst such violence in recent years.

As of Thursday, 12 people in Israel had died as a result of the Hamas-IDF rocket exchange, with over 50 seriously injured. Among the Palestinians, there are at least 232 dead and over 1,900 wounded, according to reports.

© REUTERS / POOL
Netanyahu Warns Hamas Will Pay 'High Price' for Deadly Escalations in Gaza Strip
The escalation began early last week, when more than 600 rockets were fired from the Gaza Strip at Israel, prompting the IDF to retaliate.

The exchange followed a spike in bilateral tensions in the wake of an Israeli court ruling to evict several Palestinian families from Jerusalem. Last Monday, Palestinians clashed with Israeli security forces near the Al-Aqsa Mosque as the nation celebrated Jerusalem Day, commemorating Israel's takeover of the Old City following the 1967 Six-Day War.

'US Influence Was Important' in Averting Israeli Ground Invasion of Gaza, Report Says