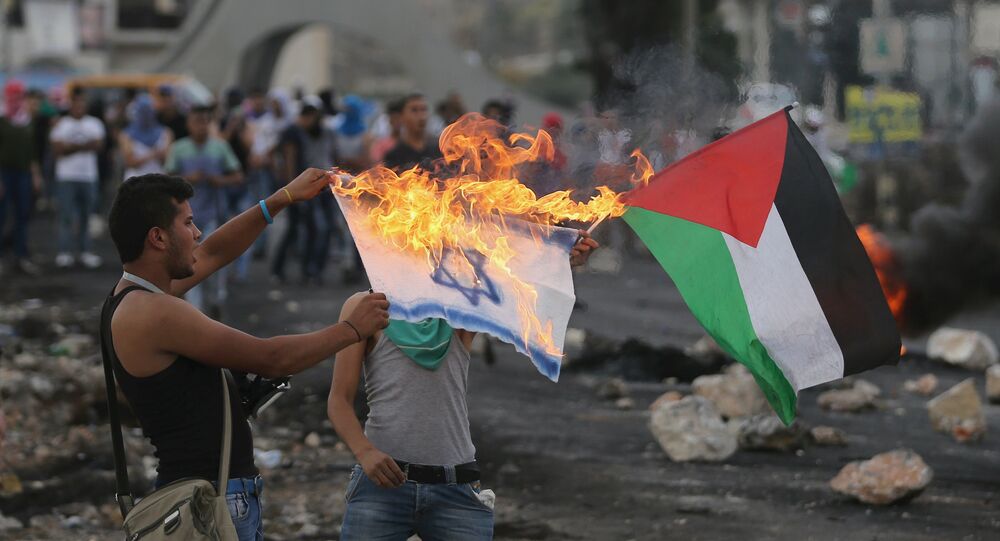 The current escalation of the Israeli-Palestinian conflict has witnessed some of the worst violence in years grip the Middle East; to better understand what is at stake and what is fuelling what has been dubbed the world’s “most intractable” conflagration, one should take a look back at the history of the standoff.

The current spiral of violence in the Middle East followed a month of brewing tensions in Jerusalem, when unrest was triggered by an Israeli court's decision to evict several Palestinian families from Sheikh Jarrah neighbourhood of the Old City. It was also fueled by the Israeli decision to restrict access to the Temple Mount. The latter is a holy site for Jews and Muslims alike, and is home to the Al-Aqsa Mosque.

Large-scale clashes erupted between Palestinians and Israeli police on 6 May, prompting Hamas militants, who maintain de facto control over Gaza, to launch rocket attacks at Jerusalem and Tel Aviv in retaliation; this is just the latest chapter in a conflict which itself has, in fact, gone on for decades.

Essentially, the Israeli-Palestinian conflict is over who gets control of what land, as both Jews and Arab Muslims date their claims to the area in question back over a thousand years.

© AFP 2021 / AHMAD GHARABLI
A Palestinian man walks past the Dome of Rock at the Al-Aqsa Mosque compound after the Friday prayer in Jerusalem's Old City on November 11, 2016

Control over the land known as 'Palestine', populated by a Jewish minority and Arab majority, was assumed by Britain after the Ottoman Empire, which had ruled over that part of the Middle East for nearly 400 years, was defeated in WW1.

Tensions started to grow between the two peoples when the British government issued the Balfour Declaration in 1917, during the First World War, a public statement announcing support for the establishment of a "national home for the Jewish people" in Palestine. It also added that “nothing should be done to prejudice the civil and religious rights of the existing non-Jewish communities in Palestine".

While the term "national home" - without precedent in international law – was but a vague one, and specified neither whether a Jewish state was contemplated, nor any intended boundaries of Palestine, Jews fleeing persecution in Europe latched on to the notion of establishing a national homeland.

The Zionist movement - the modern movement for the creation of a homeland for the Jewish people - was established as a political movement in 1897. The World Zionist Organisation and the Jewish National Fund had begun to encourage immigration and funded the purchase of land, both under Ottoman rule and under British rule, in the region of Palestine.

© AP Photo / Sebastian Scheiner
The Dome of the Rock Mosque in the Al Aqsa Mosque compound, known by the Jews as the Temple Mount, is seen in Jerusalem's Old City

While Jews regarded the land as their ancestral home, with the aspiration to return to the Zion rooted in Jewish religious thought, Palestinian Arabs, who also claimed the land, opposed the move.

Between the 1920s and 40s, the number of arriving Jews grew, driven by persecution in Europe and as a consequence of the Nazi Holocaust.

© Sputnik
Prisoners of the German death camp Mauthausen during the war.

Some immigrants settled in Jewish communities established on lands purchased by Zionist agencies from absentee landlords. On occasion, large acquisitions of lands in this manner resulted in the replacement of the Arab tenant farmers with European Jewish settlers. The Palestinian Arabs began to feel ‘dispossessed’.
During the 1920s, relations between the Jewish and Arab populations witnessed increased hostility.

An early United Nations plan was conceived in 1947, known as the Partition Plan, which sought to divide the British Mandate of Palestine into Arab and Jewish states.

In line with the plan, Jerusalem would become an international city – an approach hailed by Jewish leaders but rejected by the Arab side and never implemented. Around that time, British military forces started to gradually withdraw from Palestine, ceding control to local authorities.

Immediately after the UN resolution, the termination of the British mandate over Palestine erupted into the 1947-1948 civil war between the Arab and Jewish communities. Troops from neighbouring Arab countries also invaded.

Many Palestinians fled, and later dubbed the conflict Al Nakba, or "the Catastrophe".

© AFP 2021 / SAID KHATIB
Palestinian militants of the Ezzedine al-Qassam Brigades, Hamas' armed wing, stand with an old Palestinian man holding a wooden key during a parade in the southern Gaza Strip town of Rafah on May 17, 2015 to mark the 67th anniversary of the "Nakba"

The war ended in 1949 in an Israeli victory, with a ceasefire but without a peace agreement. The territory was divided into 3 parts: the State of Israel, the West Bank (of the Jordan River), and the Gaza Strip. Jordan occupied land which became known as the West Bank, and Egypt occupied Gaza.

The city of Jerusalem was divided between Israeli forces in the West, and Jordanian forces in the East. Lack of a peace deal continuously fuelled mutual recriminations, resulting in wars and fighting in the decades that followed.

What is known as the Six day War was fought between 5 and 10 June 1967 between Israel, on the one hand, and Egypt, Jordan and Syria, on the other, as relations between Israel and its neighbours had not been normalised after the 1948 Arab–Israeli War.

© Sputnik
The Arab-Israeli conflict. The six-day war of 1967. Refugees on the roads of Israel-occupied Arab territories. Photo copy from the weekly "Za rubezhom."

The war in 1967 left Israel in control of most of the Golan Heights (legally part of Syria), the Gaza Strip, and Egypt's Sinai peninsula, home to large Arab populations. The majority of Palestinian refugees and their descendants populate Gaza and the West Bank. They also reside in neighbouring Jordan, Syria and Lebanon. In 1982, Israel returned the Sinai peninsula to Egypt in line with the implementation of the 1979 Egypt–Israel peace treaty, which also made Egypt the first Arab nation to recognise the state of Israel.

In line with the Oslo Accords, signed between the Palestine Liberation Organisation and Israel, the West Bank was split into Palestinian "islands" under partial Palestinian National Authority civil rule, and Israeli settlements overseen by Israeli law. Israel has continued to build settlements in these areas, with Palestinians saying they are illegal under international law.

© AP Photo / Majdi Mohammed
Palestinian President Mahmoud Abbas speaks a meeting of the PLO executive committee and a Fatah Central Committee at the Palestinian Authority headquarters, in the West Bank city of Ramallah, Wednesday, May 12, 2021.

Currently, the Palestinian Authority administers some 39 percent of the West Bank, with 61 percent remaining under direct Israeli military and civilian control.

Gaza is ruled by Hamas, founded in 1987 as the Palestinian Islamic Resistance Movement, which serves as the de facto government in the area; Israel and the majority of Western governments, including the European Union and the United States, have classified it as a terror organisation.

The US has since been one of a handful of countries to recognise Israel's claim to the whole of the city.

While Israeli-Palestinian peace talks have been taking place on and off for more than 25 years, a solution to the stalemate is yet to be found.

For decades, the so-called “two-state solution” has been the primary focus of efforts to achieve peace in the Israeli-Palestinian conflict. It would establish an independent Palestinian state alongside Israel.

Benjamin Netanyahu, the Israeli prime minister since 2009, had endorsed the two-state solution in a speech that year, but has since continued to expand West Bank settlements, In 2015 he said there would be “no withdrawals” and “no concessions”.

During ex-US President Donald Trump’s tenure, a so-called "deal of the century" was conceived jointly with Israeli PM Benjamin Netanyahu. However, it failed to get off the ground, and was rejected by the Palestinians as one-sided, with the Palestinian National Authority's President Mahmoud Abbas reacting by denouncing it as the "slap of the century".

US Ready to Facilitate Israeli-Palestinian Ceasefire When Sides Ready