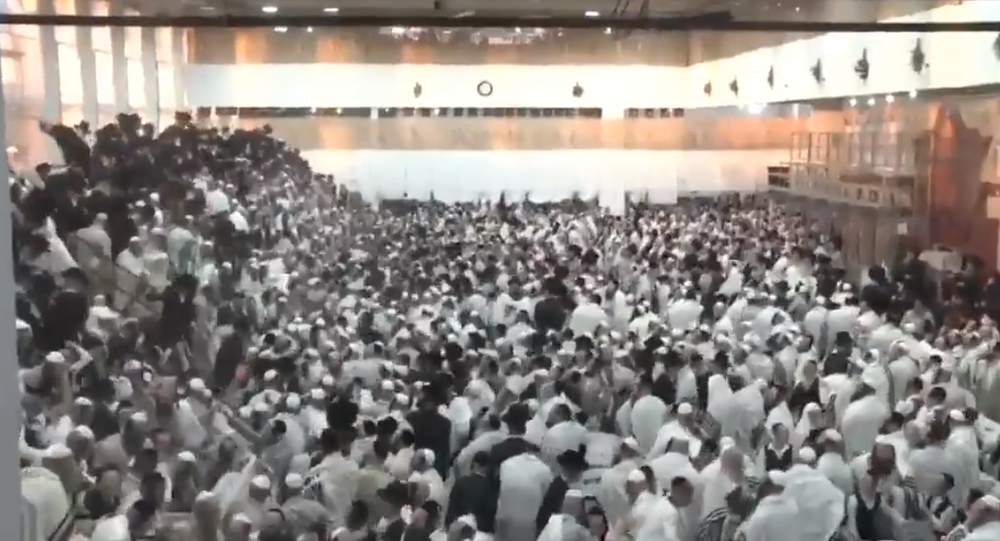 The incident comes amid escalating violence between Jews and Palestinians across Israel, the West Bank, and Jerusalem, and several weeks after a deadly stampede at a religious festival in northern Israel.

One person has died and between 40 and 60 injured following the collapse of bleachers at a synagogue in Giv'at Ze'ev, an Israeli settlement in the West Bank about 5 km northwest of Jerusalem, emergency services have reported.

Amateur footage from the scene shows hundreds of worshipers crowded into the synagogue's halls, dancing along to music, when the collapse takes place.

The incident sparked chaos at the scene, with people heard calling for calm as believers sought to leave the area.

According to the latest information from Israel's national emergency medical service Magen David Adom, the number of injured people evacuated from the synagogue has risen from 132 to over 160.

"Following the incident in Givat Zeev, ambulance units evacuated 167 injured people," the MDA said in a statement, noting that the condition of five of them is estimated as severe, 10 of them as moderate, and 152 others received minor injuries.

Earlier, police said 40 people were injured in the incident and called it a "multiple casualty event," while local medical services said that about 60 people were being treated, about ten of them in serious or critical condition. Two people have died.

Footage from outside the synagogue showed ambulances and fire vehicles at the scene. The military announced that soldiers had been deployed to assist.

The incident took place on the eve of Shavuot, or Feast of Weeks, a Jewish observance that follows 50 days after Passover. It is the second of three major Jewish festivals, with the others being passover itself and Sukkot. Shavuot is a public holiday in Israel, and schools and most businesses are closed. The festival marks the wheat harvest in the Old Testament and also commemorates the legend of God giving the Torah to the children of Israel at Mount Sinai.

Sunday's incident comes several weeks after the deadly 30 April 2021 stampede at a religious festival in northern Israel, in which 45 people died and over 150 were injured in what Israeli Prime Minister Benjamin Netanyahu said was "one of the worst disasters" in the country's history. The vast majority of people killed in that incident were Haredi Jews – a sect of Orthodox Judaism with highly conservative beliefs and social customs and mostly negative attitudes toward Zionism and the State of Israel.

The Giv'at Ze'ev synagogue was said to have been filled with ultra-Orthodox worshipers during Sunday's incident. The settlement is known to contain a mix of Haredi, Zionist Orthodox, and secular populations.

© AFP 2021 / MOHAMMED ABED
Israel Reportedly Considering Gaza Ceasefire Amid Growing International Calls to End Conflagration
The Giv'at Ze'ev settlement, situated near Jerusalem, was founded on the site of an abandoned Jordanian military camp in the West Bank 1977, a decade after the Six Day War of June 1967, during which time Israel seized the territory from Amman. The United Nations considers Israeli settlements in the West Bank to be illegal under international law, but the Israeli government and its US allies have disputed the UN's judgements. Israel has not formally annexed the West Bank, but maintains de-facto control over much of the territory, and has built hundreds of settlements in the territory containing over 600,000 Israeli Jews.

This year's Shavuot celebrations have been muted amid tensions and violence between Israel's Jewish and Palestinian communities after weeks of mounting tensions over a series of grievances by Palestinians against the Israeli government, including restrictions on access to the Old City of Jerusalem, the Israeli police storming of the Al-Aqsa Mosque, and an anticipated Supreme Court ruling allowing for Palestinians to be evicted from their homes in East Jerusalem. The tensions have sparked violence, rioting, and clashes between police and protesters throughout Israel, the West Bank and Jerusalem, and Gaza militants have launched hundreds of rockets into the country, with the Israeli military responding with massed airstrikes. Over 100 people have died in the violence, most of them Palestinians in Gaza, and hundreds more have been injured.