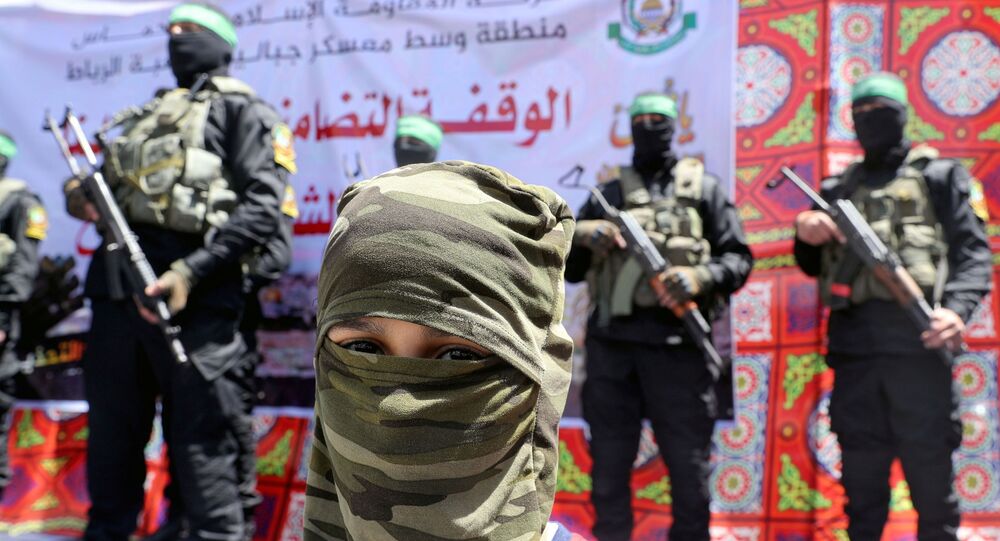 Israeli Publicist: How Could Jewish State Strike Deal With Those Who Don't Want it to Exist?

Israel commemorated its 73rd anniversary of independence on 14 May with the country being dragged into an armed conflict with Hamas, a militant Islamist group based in the Gaza Strip. What's behind the latest standoff and why haven't the warring parties been able to reach a compromise for decades?

The rocket attacks by Hamas started on 10 May targeting areas near Jerusalem, Ashkelon, and Tel Aviv. The major escalation was preceded by clashes between Israeli forces and Palestinian Arabs at Jerusalem’s Al-Aqsa mosque compound, which left at least 300 Palestinians and several dozen Israeli police officers injured.

The clashes in Jerusalem served as the trigger point while the major reason behind Hamas' attacks against the Jewish state is that the organisation does not recognise Israel's right to exist, according to Jerusalem-based Israeli publicist and political commentator Avigdor Eskin.

Two Hamas Docs Say Israel Has No Right to Exist

"The reason for the conflict is their raison d’etre – the destruction of Israel and killing of the Jewish people," the commentator argues, citing the 1988 Covenant of the Islamic Resistance Movement (Hamas).

Hamas was founded in 1987 as a wing of the Muslim Brotherhood*, an international Sunni Islamist group. The 1988 charter explicitly called for the destruction of Israel and "jihad" against Jews as well as the creation of an Islamic state in Palestine.

Article 13 of the 1988 document stipulated that "there is no solution for the Palestinian question except through Jihad." "Initiatives, proposals, and international conferences are all a waste of time and vain endeavours," the covenant underscored.

Since then, a number of countries have designated either Hamas or its military wing, the Izz ad-Din al-Qassam Brigades, as a terrorist organisation, condemning its calls for violence against Jews as "racism."

In 2017, Hamas attempted to rebrand itself as an Islamic national liberation movement rather than a Muslim Brotherhood offshoot in a bid to break the movement out of its international isolation. The new 2017 programme stated that "Hamas does not wage a struggle against the Jews because they are Jewish but wages a struggle against the Zionists who occupy Palestine."

Despite dropping the explicit language of the original covenant, the document retained:

·         the goal of "liberating" Palestine – the geographical area covering the State of Israel, the West Bank and the Gaza Strip;

·         justification of the struggle against Israelis by all means possible, arguing that "resisting the occupation with all means and methods is a legitimate right guaranteed by divine laws and by international norms and laws."

"The establishment of 'Israel' is entirely illegal," claimed the document, rejecting all the agreements, initiatives, settlement projects, and international resolutions "that are aimed at undermining the Palestinian cause."

While the document calls for "liberation" of Palestine in its entirety, Article 20 remarks that Hamas "considers" the establishment of "a fully sovereign and independent Palestinian state, with Jerusalem as its capital along the lines of the 4th of June 1967." This comes in an apparent contradiction with the spirit of the programme as the 1967 lines leave part of Palestine's territory out of Hamas' claim.

Still, the document does not explicitly supplant the previous charter of the founding fathers. Presenting the new political programme in 2017 Hamas chief Ismail Haniyeh stated publicly that it would undermine neither the organisation's principles nor its strategy.

Since its inception Hamas has engaged in attacks against Israel. Between 1993 and 2000, Hamas and the Palestinian Islamic Jihad (PIJ) carried out more than 30 suicide bombings, while the Palestine Liberation Organisation (PLO) negotiated peace with Israel within the framework of the Oslo format.

During the Second Intifada (2000-05) which claimed the lives of 1,000 Israelis and 3,000 Palestinian Arabs, various Palestinian groups conducted 25,000 assaults against the Jewish state, including 151 suicide attacks, according to the Israel Securities Authority (ISA). Hamas and PIJ were responsible for 65 percent of suicide bombings, which claimed the lives of 515 Israelis.

Israel's decision to dismantle Jewish settlements in the Gaza Strip and completely withdraw from the region in 2005 did not end the violence, says Avigdor Eskin. According to the observer, since then Hamas has only improved its military capabilities and stepped up strikes against Israel.

In the subsequent years, the Islamist militant group and the Israeli Defence Forces have repeatedly engaged in armed conflicts, with the latest military standoffs among the fiercest.

While some media routinely pins the whole blame on Israel for the civilian casualties, it remains overlooked that Hamas on many occasions uses Palestinian civilians as human shields, argues Eskin.

"Hamas fires the deadly missiles towards Israeli towns and villages targeting almost solely civilian targets," says the Israeli commentator. "Also, Hamas fires from the heavy populated areas and this is another crime against humanity. When Israel hits the very sources of fire – civilians suffer sometimes. If these facts are ignored, the whole picture would be distorted."

Eskin notes that it also remains underreported that "when Israel strikes back at Hamas, Palestinian civilians in the area are getting calls from the Israeli side with a warning to leave the area in order to save their lives."

What's Behind the Timing of the Clashes?

Apart from fighting with Israel, Hamas has also clashed with other Palestinian political and militant movements, such as the Fatah Party – formerly the Palestinian National Liberation Movement. The Fatah-Hamas conflict also referred to as the Palestinian Civil War erupted in 2007 and resulted in the split of the Palestinian Authority.

Following the victory of Hamas' Change and Reform Party in elections for the Palestine Legislative Council (PLC) in 2006, Fatah and Hamas engaged in a series of disputes and sporadic over power-sharing. After a military standoff between 10 and 15 June 2007, Hamas ousted its rival from the Gaza Strip.

Since that time the PLC joint legislative activities have been frozen. The new parliamentary and presidential polls as well as the Palestinian national council elections were scheduled to be held this year for the first time since 2006.

Some observers wonder as to what prompted Hamas, which is seeking to win in the 2021 vote, to engage in a direct conflict with the Jewish state. A number of American conservative politicians and pundits allege that Donald Trump's defeat could have "emboldened" the militant group.

President Trump’s leadership for 4 years sent a clear message to the world that the United States would stop at nothing to defend Israel.

Joe Biden has done the opposite. Hamas took notice. This is the result.

​Trump conducted a series of policies in support of Israel including the recognition of Jerusalem, Golan Heights, and the West Bank as Jewish territories. For its part, the Biden administration and the Democratic Party are leaning towards a two-state solution and are expected to recalibrate some of Trump's Israel policies.

Last fall we saw a watershed shift toward peace w/the Abraham Accords. The entire region was eager for more. Biden had 4 months to build on this. He also could’ve steered Palestinian leaders into the 2020 “Peace to Prosperity” plan.https://t.co/MHT2AY73OD https://t.co/3uFJhCrKuV

​"Hamas is hoping the Biden administration will pressure Israel to stop the military operation. It remains to be seen if their hopes will come true," presumes the Israeli commentator.

Currently, Israel's primary aim is to destroy Hamas' military infrastructure in order to prevent their attacks for the coming few years, Eskin says. It's likely that the Israeli operation will stop in a week or two. However, it might lead to yet another temporary cease-fire which would not solve the problem, he argues. The Israeli commentator believes that the disarmament of Hamas' military wing as well other jihadi militants in Gaza would have improved the odds of resolving the longstanding Israeli-Palestinian conflict and paved the way to peace in the region.

*The Muslim Brotherhood is a terrorist organisation banned in Russia and many other countries.