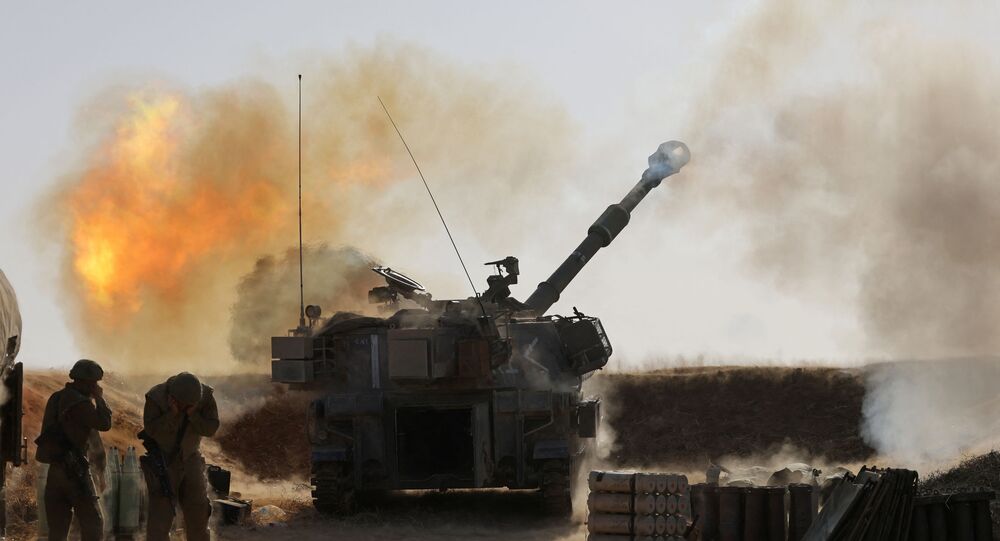 MOSCOW (Sputnik) - The Israel Defense Forces (IDF) have killed at least twenty senior Hamas officials and hundreds of militants in a massive overnight attack on a network of tunnels dug under the northern Gaza Strip, and destroyed most of the groups' rocket manufacturing system, an Israeli security source told N12 broadcaster.

On Thursday night, the IDF released a vague statement saying that its "air and ground troops are currently attacking in the Gaza Strip." Some international media outlets as well as Hamas militants perceived this statement as the start of an Israeli ground operation in the enclave.

© REUTERS / AMIR COHEN
Videos: IDF Launches Strikes, Taps Ground Forces Amid Rocket Exchanges Along Gaza Strip
According to the broadcaster, the statement was released as Israeli infantry vehicles and tanks were heading toward the fence separating Israel and Gaza, and leading Hamas operatives to believe that the Israeli troops had already crossed the fence. This reportedly prompted scores of Hamas militants to look for shelter in the network of underground tunnels.

IDF spokesman Jonathan Conricus later denied that the Israeli forces had entered the Gaza Strip. According to the IDF, it was a major 40-minute long air campaign that involved some 160 aircraft that dropped around 450 missiles targeting the enclave's tunnel network. After the operation, the IDF said that it had "damaged many kilometers of the Hamas ‘Metro’ network."

"Yesterday we carried out at least 20 targeted assassinations of senior Hamas officials, hundreds are killed. We have destroyed most part of Hamas' rocket manufacturing system, we paralyzed the tunnels' system, which was their strategic tool. [We also made] a lot of many other achievements that they still do not understand," the source told the broadcaster.

The Israeli military have long been planning how to turn the threat of the enclave's tunnel network into an opportunity to fight Hamas, thereby making these tunnels into a "mass grave."

It is still unclear how many Hamas militants were buried in the tunnels as well as the total extent of damage inflicted.

The situation on the border between Israel and the Palestinian Gaza Strip escalated on Monday evening. Since then, around 1,750 rockets have been fired from the Gaza Strip into Israeli territory. Israel has responded by launching multiple strikes against Hamas.