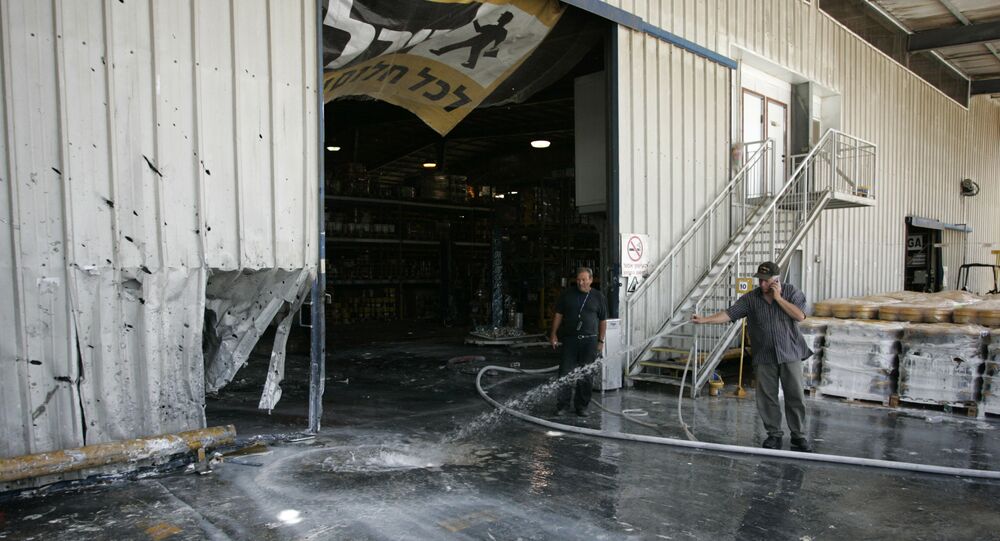 Earlier, the Israel Defence Forces said that a total of 1,800 rockets had been fired at Israel from the Gaza Strip since tensions started to escalate, 430 of which fell inside the Palestinian enclave.

The military wing of Hamas, the Al-Qassem Brigades, claim they targeted a chemical plant in Nir Oz, an Israeli town near Gaza, with a drone.

"The Al-Qassem Brigades attacked a chemical plant in Nir Oz with a Shehab drone," the Hamas military wing said in a statement.

The IDF has yet to comment on the claims.

Earlier, it was reported that the IDF Air Force and ground forces were attacking the Gaza Strip. The Israeli army later stated that the troops hadn't entered the Gaza Strip, but that they had hit targets inside the enclave.

© AFP 2021 / MENAHEM KAHANA
'We Were Ordered to be Prepared': No Boots on the Ground in Gaza, Israeli Military Says
A total of 1,800 rockets have been fired at Israel from the Gaza Strip since tensions started to escalate, 430 of which have fallen inside the Palestinian enclave.

Israeli Prime Minister Benjamin Netanyahu said that the military operation against Hamas in the Gaza Strip would continue as long as necessary.

Large-scale clashes broke out from 7-10 May between Palestinians and Israeli police, leading to the sharpest escalation in the Gaza Strip in recent years. Riots began in two areas of East Jerusalem at once - near the Temple Mount and in the Sheikh Jarrah quarter, where several Arab families are being evicted in accordance with an Israeli court decision.