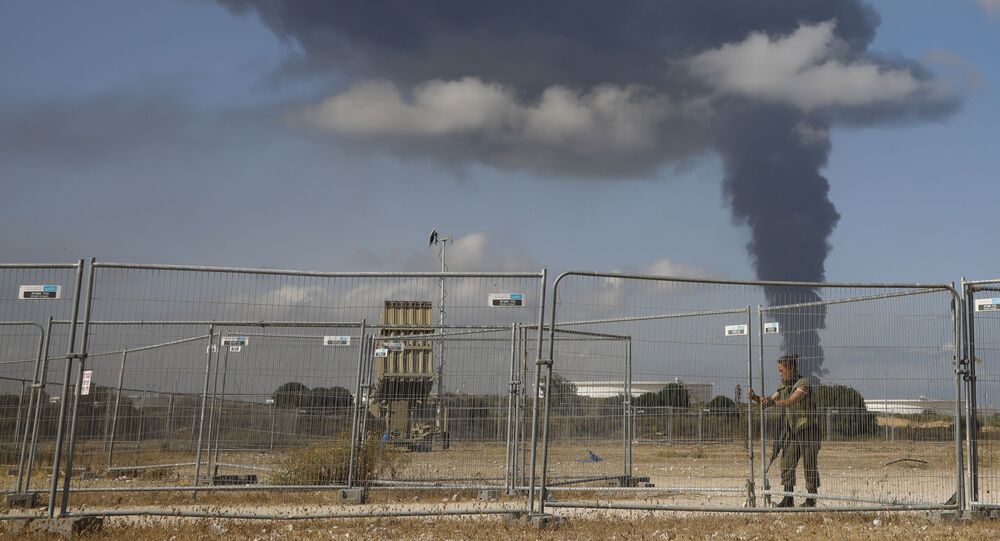 Earlier this week, the Israel Defence Forces claimed that their Iron Dome missile defence system had intercepted around 90% of the barrage of Hamas rockets fired at targets in the Jewish state amid the ongoing escalation of Palestinian-Israeli tensions.

Meeting with the leaders of Palestinian groups in Damascus on Wednesday, Zarif said that claims about the Iron Dome’s impenetrability had apparently proven to be “all hollow and falsehood”, according to Fars News.

The remarks came as Israeli Prime Minister Benjamin Netanyahu said that the country’s military had struck hundreds of Hamas targets in the Gaza Strip.

© REUTERS / AMIR COHEN
Israel's Iron Dome anti-missile system fires to intercept a rocket launched from the Gaza Strip towards Israel, as seen from Ashkelon, Israel May 12, 2021

"Using the batteries of the Iron Dome gives us the ability to attack, and […] we continue to strike at [the Islamist group] Hamas, protecting our citizens”, Netanyahu pointed out.

He was echoed by IDF spokesman Jonathan Conricus, who said that at least 1,600 rockets had been fired at Israel from the Gaza Strip since the beginning of the escalation, and that the effectiveness of Israel's Iron Dome missile defence system is estimated at around 90 percent.

Conricus spoke after the IDF reported that Hamas fighters had launched over 600 rockets at Israel from Gaza on Wednesday and that approximately 200 of them were intercepted by the Iron Dome, while the Israeli Armed Forces conducted retaliatory strikes against Hamas.

© REUTERS / IBRAHEEM ABU MUSTAFA
Hamas' Military Wing Fires Barrage of Rockets Across Israel, Interceptions Reported - Videos
The clashes in East Jerusalem led to the sharpest escalation of tensions between Israel and the Palestinians in the Gaza Strip in recent years.

The clashes began near the Temple Mount and in the Sheikh Jarrah neighbourhood, where several Arab families were being evicted by an Israeli court, which led to protests that quickly escalated into riots in several cities in the Jewish state. The violence has already reportedly claimed the lives of 83 people in Gaza and seven in Israel.