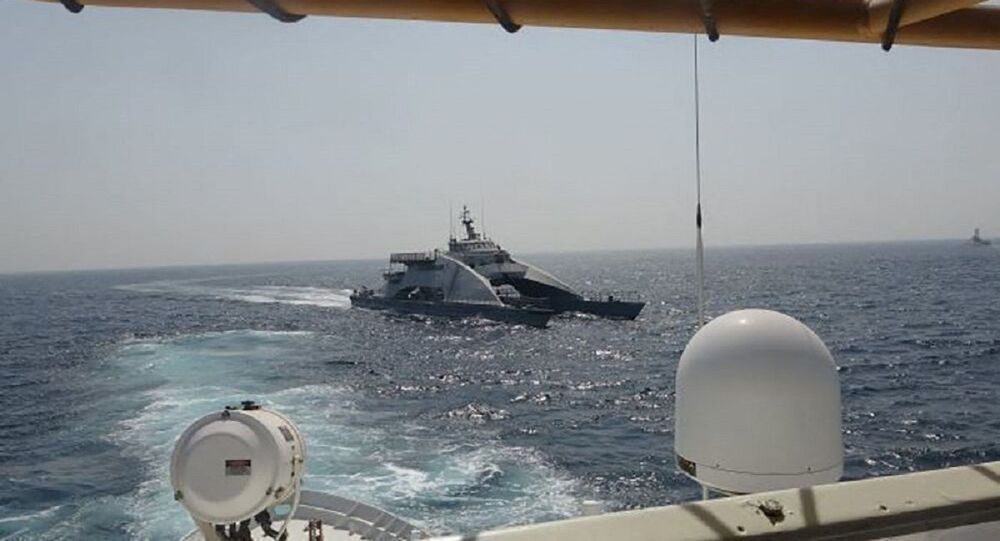 Whose Coast Are You 'Guarding'? Iran's Javad Zarif Lashes Out at US Coast Guard Over Hormuz Incident

Tehran has repeatedly objected to the presence of American warships in the Persian Gulf under the pretext of ensuring the safety of navigation. The Islamic Republic believes local powers should handle that instead.

Iran's Foreign Minister Javad Zarif has lashed out at the US Coast Guard on Twitter questioning the nature of its operations in the Persian Gulf and the reason why its ships are operating so far from America's shores.

⁩
.@USCG : Exactly whose coast are you supposed to be "guarding"? pic.twitter.com/2NXkg6reve

In hist post, Zarif recalled how far from home the US Coast Guard vessels sailed, when they encountered 13 Islamic Revolutionary Guard Corps Navy (IRGCN) ships. The encounter sparked harsh criticism from the Pentagon, who claimed that the IRGCN speedboats armed with machine guns made "unsafe and unprofessional" approaches to the US convoy sailing through the Strait of Hormuz on 10 May.

The convoy, which the US sent to the Persian Gulf under the pretext of conducting "routine" patrols to disrupt the transport of "illicit cargo", consisted of a US Navy guided-missile cruiser, Coast Guard patrol boats, and the surfaced guided-missile submarine USS Georgia.

Pentagon spokesman John Kirby said IRGCN ships did not respond to requests to increase their distance from the convoy and that one of the US vessels had to fire 30 warning shots before they changed course. The US Fifth fleet later released videos of the incident slamming the actions of the Iranian Navy.

The IRGCN, however, dismissed Kirby's claims, stating that its ships were engaged in routine and normal daily missions in the territorial waters of the Islamic Republic when they encountered seven US ships, which "showed unprofessional behaviours, including flying helicopters, and firing flares and aimless and provocative shots".

"The Americans should strictly abide by international regulations and the rules of navigation and bandit control in the strategic Strait of Hormuz and the Persian Gulf by refraining from false narratives and unprofessional behaviour", the IRGCN statement reads.

The Iranian Navy further disputed Kirby's claims about US warships sailing through the strait and acting during the incident in accordance with international laws, and called their presence in the region "illegitimate". The IRGCN stressed that the US has become "the centre of instability, threat and dangerous insecurities" in the Persian Gulf.