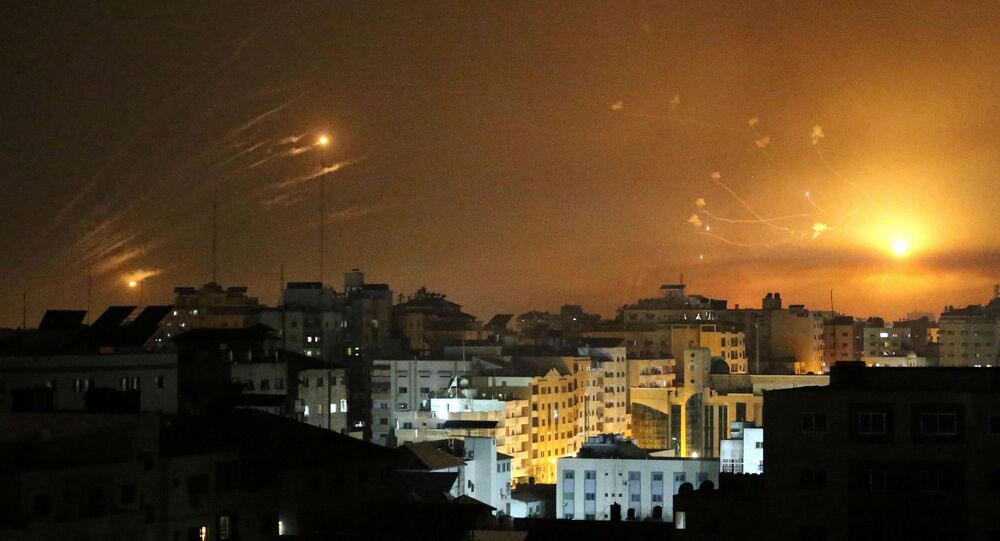 Earlier in the day, the Israel Defence Forces (IDF) reported that Palestinian fighters had launched over 600 rockets at the country from the Gaza Strip. Approximately 200 of the strikes were intercepted by the Iron Dome missile defence system, with Israel carrying out retaliatory strikes against Gaza in return.

Armed Palestinian groups continued to fire a rocket barrage towards Israel early Wednesday, with rockets aimed at the cities of Ashkelon, Modiin, and Tel Aviv, according to local media reports.

As Hamas launched a massive barrage of rockets at the country's capital, according to the IDF, a massive explosion was heard near Tel Aviv. The cause of the explosion, however, is not clear at this time.

Multiple videos shared on social media appear to depict the Israeli air defence system in action. The Iron Dome system can ostensibly be seen intercepting multiple rockets over the city, as air raid sirens sound off in the background.

And once more multiple interceptions. pic.twitter.com/kAbQelBugJ

Reports citing Hamas' military arm have indicated that about 110 rockets were fired toward Israel and the nearby Ben Gurion International Airport over a short period of time. The city of Beersheba has also reportedly been hit by dozens of missiles.

Rocket barrage fired from #Gaza a short time ago towards #Israel. pic.twitter.com/9EIwRhq5js

Further footage of rocket launches from #Gaza towards #Israel. pic.twitter.com/JdMZHJZTN5

Earlier in the day, the IDF released a video shot by an eyewitness showing extremely intense rocket fire and the operation of the Iron Dome interceptors over the evening sky of Tel Aviv.

RAW FOOTAGE: This is the moment the Iron Dome intercepted a barrage of rockets over Tel Aviv and central Israel. pic.twitter.com/8jl8OTgWCl

So far, hundreds of explosions have been recorded across southern and central Israel, per media reports. Sirens could be heard in settlements near Gaza, Beersheba and Tel Aviv and its environs.

The recent barrage of rockets came only minutes after news that the IDF had destroyed a nine-storey building in Gaza City, in accordance with their statement that they were striking residential buildings because those were allegedly being used by Palestinian fighters.

The IDF said it has struck a number of targets in the Gaza Strip in the past few hours, and the strikes are ongoing.

The Iron Dome is a mobile all-weather air defence system intended to intercept and eliminate short-range rockets and artillery shells fired from distances of 4 to 70 kilometres that are aimed at Israeli-populated areas.