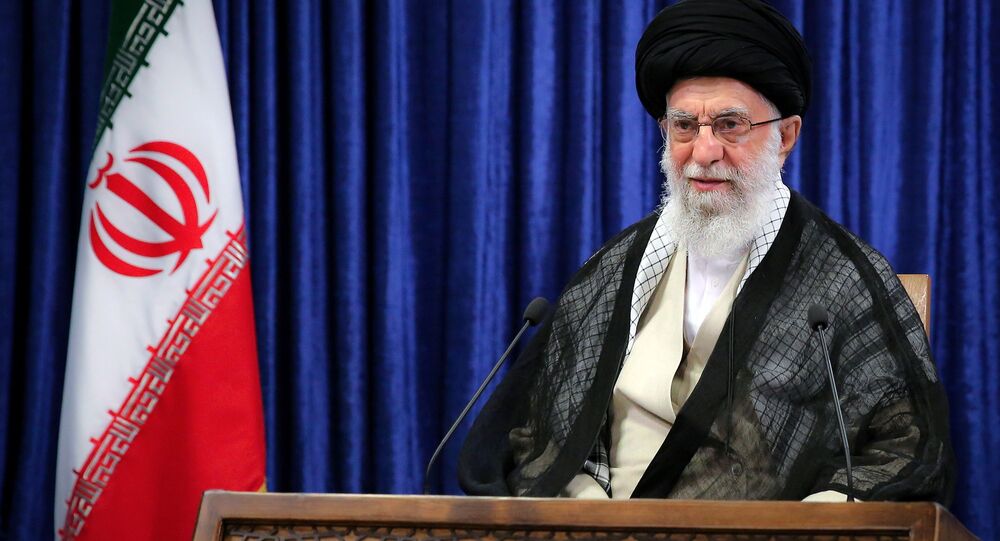 Earlier on Tuesday, the IDF approved continuous attacks on Gaza in the next 24 hours as the latest escalation of Israeli-Palestinian tensions shows no sign of abating.

Iranian Supreme Leader Ayatollah Ali Khamenei has called on Palestinians to unite amid escalating tensions between Israel and the Palestinian movement Hamas, viewed by Tel Aviv as a terrorist group.

"All Palestinians, including those in Gaza, in Quds [Jerusalem], in the West Bank, in the lands of 1948 and even those in refugee camps, form a single unit. They should adopt a strategy of coalescence. Every part should defend other parts and under pressure use the tools at their disposal", Khamenei tweeted on Monday.

Israel’s Ambassador to the US and UN Gilad Erdan was quick to respond by arguing it was "typical that Khamenei, leader of the axis of evil, would urge Palestinians to unite in violence and hatred towards Israel".

Erdan pledged that he would "continue to urge moderate and peace loving nations in the Middle East to adopt a strategy of coalescence in opposition to Iran's nuclear programme".

Israel has repeatedly promised to do its best to prevent Iran from obtaining a nuclear weapon, while Tehran insists that its nuclear programme is for peaceful purposes only.

Khamenei's call for Palestinian unity came after Secretary-General of the League of Arab States (LAS) Ahmed Aboul Gheit denounced Israel's air raids on the Gaza Strip. The latter resulted in the deaths of over 20 Palestinians.

OPERATIONAL FOOTAGE: This is the moment we struck 3 Hamas terrorists operating an anti-tank missile in Gaza. pic.twitter.com/iRqomrGwVI

He described Israel's actions as "indiscriminate and irresponsible", adding that they were driven by "vengeful and domestic" political intentions. Aboul Gheit blamed Israel for the ongoing escalation and called upon the international community to take immediate measures to push Israel to "stop aggression in Jerusalem and the Gaza Strip".

The Israeli Foreign Ministry, for its part, urged the global community to condemn rocket attacks on the country's civilian population "in the strongest possible terms", and support the Jewish state's right to self-defence.

Earlier in the day, the Israel Defence Forces (IDF) said that over 200 rockets had been launched from the Gaza Strip toward Israel. In response, Israel hit 130 Islamic Jihad and Hamas targets, also announcing the elimination of a Hamas "terrorist" cell operating anti-tank missiles in Gaza.

INTERCEPTED:
Terrorists recently fired another barrage of rockets from Gaza toward the Israeli city of Ashkelon.

We intercepted the rockets with the Iron Dome Aerial Defense System, and are now striking Hamas terror targets. pic.twitter.com/5i87BRAgDn

The developments follow tensions in Jerusalem not seen in the city since 2017 after Israeli riot police clashed with massive crowds of Palestinian worshippers outside the Al-Aqsa Mosque on the last Friday of the Muslim holy month of Ramadan.

© REUTERS / Ammar Awad
A cameraman is helped by a Palestinian after falling on the ground during clashes with Israeli police at the compound that houses Al-Aqsa Mosque, known to Muslims as Noble Sanctuary and to Jews as Temple Mount, in Jerusalem's Old City, May 10, 2021.

Since the beginning of Ramadan and the Israeli decision to limit the amount of prayers at the Temple Mount, a holy site for Jews and Muslims that houses the Al-Aqsa Mosque, mobs of young Arab men have initiated dozens of attacks on Jewish civilians. At some point, these assaults turned into an almost daily occurrence, something that pushed Israel's security forces to interfere.

The agreement allows Tel Aviv to extend its sovereignty to Jewish settlements throughout the West Bank, keeping the territory fragmented into Arab and Jewish zones policed by the Israeli military.

The deal also stipulates that Jerusalem would become the "sovereign capital of the State of Israel", proposing, at the same time, to double the size of Palestinian territories through a series land swaps and calling for $50 billion to fund Palestinian National Authority (PNA) infrastructure projects.