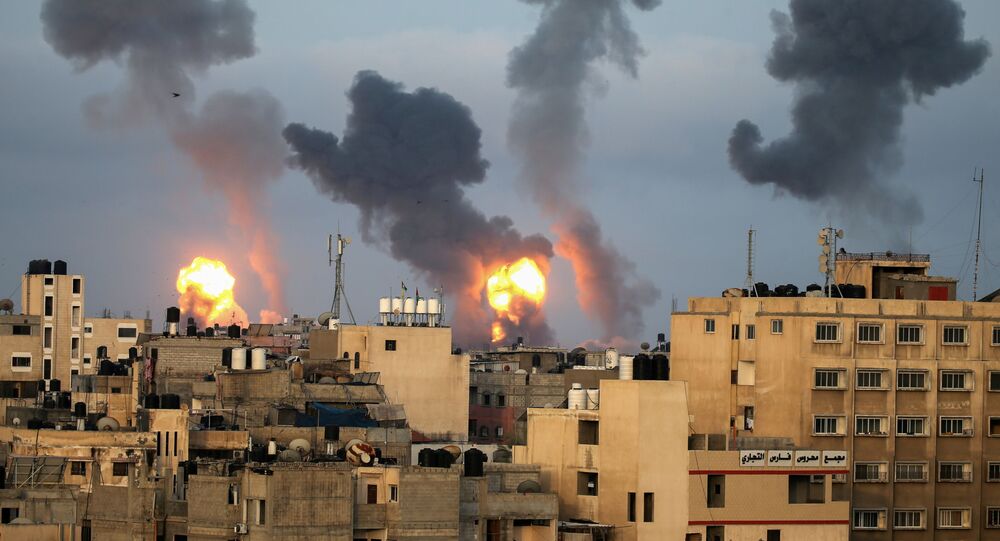 Over the past three days, Jerusalem has been rocked by violence as Israel and Hamas exchanged missile attacks in the latest escalation of tensions.

A video of the Israeli military's retaliatory strikes on Gaza targets has been published on the Israel Defence Forces (IDF)'s Twitter page.

The 16-second satellite footage came as the IDF tweeted that they had attacked 130 "terrorist targets" in Gaza, killing at least 15 "Hamas operatives" in response to the Palestinian militant group's rocket attacks against Israel. Israel views Hamas as a terrorist organisation.

This followed the IDF saying in a statement that six civilians had been injured in a rocket attack on the southern Israeli city of Ashkelon earlier in the day.

"As non-stop barrages of rockets continue to be fired toward southern Israel, an apartment building in Ashkelon was hit. 6 civilians were injured", the IDF said.

The IDF spoke after Hamas warned that Israel has until 6 p.m. to withdraw soldiers from the areas of the Al-Aqsa Mosque and Sheikh Jarrah neighbourhood in East Jerusalem. After that, about 150 rockets were fired from the Gaza Strip on Israel, with dozens of them intercepted by the Jewish state's Iron Dome missile defence system.

INTERCEPTED:
Terrorists recently fired another barrage of rockets from Gaza toward the Israeli city of Ashkelon.

We intercepted the rockets with the Iron Dome Aerial Defense System, and are now striking Hamas terror targets. pic.twitter.com/5i87BRAgDn

Later, the military wing of Hamas, the Al-Qassam Brigades, gave Israel two more hours to pull its soldiers from the Al-Aqsa Mosque area, threatening to retaliate.

The EU subsequently urged the parties to the Palestinian-Israeli conflict to immediately stop the outbreak of violence in the Gaza Strip and East Jerusalem, and called the rocket attacks on the civilian population unacceptable, according to a European External Action Service (EEAS) statement.

"The significant upsurge in violence in the […] West Bank, including in East Jerusalem as well as in and around Gaza needs to stop immediately. The firing of rockets from Gaza against civilian populations in Israel is totally unacceptable and feeds escalatory dynamics", the statement pointed out.

Violence escalated after some Palestinians claimed the police have tried to prevent them from holding their usual Ramadan evening gatherings outside the Damascus Gate in Jerusalem, close to the Al-Aqsa Mosque. On Monday, Palestinian protesters hurled stones at Israeli law enforcement officers, forcing them to resort to tear gas, rubber bullets, and stun grenades.

Tensions have intensified in the region ever since former US President Donald Trump unveiled his so-called "deal of the century", which suggested that Israel would continue to extend security to its settlements in the West Bank and the Jordan Valley, and have Jerusalem as its "undivided capital".

The deal triggered strong backlash across the world, with the Palestinian Authority insisting on restoring its pre-1967 borders and having Jerusalem as its capital.