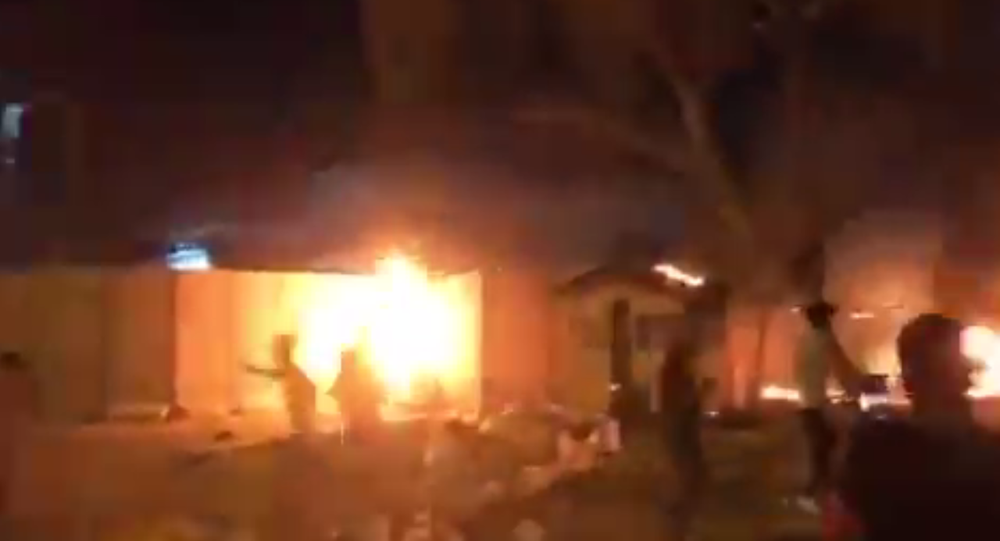 Video: Iranian Consulate on Fire in Iraqi City of Karbala

A fire in the Iranian consulate has started after the killing of an Iraqi activist named Ihab al-Wazni, which the Karbala consulate reportedly condemned, voicing condolences and sympathy.

The Iraqi city of Karbala saw a fire in the Iranian consulate on Sunday, with videos shared on social media showing unrest reportedly caused by the recent killing of a civilian activist.

According to media reports, Ihab al-Wazni, the Iraqi activist, had been killed in an "armed attack" in Karbala. Times of Israel reported that al-Wazni was a vocal opponent of Iran's influence in Iraq and Tehran-linked armed groups in the country.

Mehr news agency reported that the Karbala consulate expressed condolences over the death of the activist, saying that such actions fuel "insecurity and destabilization" in Iraq.

Videos shared on social media show the consulate on fire, with Iraqi protesters besieging the building and blasts heard in the background.

JUST IN - Iraqi protesters besiege the Iranian consulate building in Karbala in response to the killing of a civilian activist.pic.twitter.com/dPrznMcgJM

#BREAKING: Following the assassination of Ihab al-Wazni, video on social media circulating showing protesters in #Iraq setting fire to the perimeter of #Iran’s consulate in #Karbala. A similar scene played out here in November 2019. pic.twitter.com/63pMJStTkR

Iraqi demonstrators surrounded the Iranian Consulate in Karbala amid protests against the assassination of leading activist Ihab al-Wazni in the city, which some pinned on Tehran-aligned militias. pic.twitter.com/b42ti2GEoD

​Earlier in the day, protesters who gathered at al-Wazni's funeral reportedly chanted “Iran out!” and “The people want the fall the regime!".