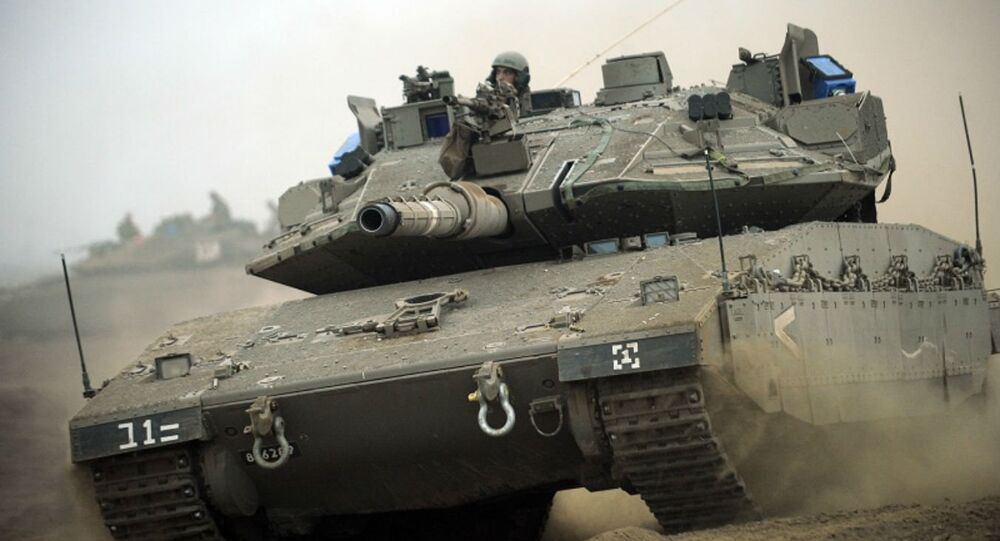 A number of Palestinian protesters sustained injuries during riots along the border of the Gaza Strip on Saturday as unrest flared around the Temple Mount and ahead of planned evictions in the Sheikh Jarrah neighbourhood of east Jerusalem, with the IDF launching tear gas and firing rubber bullets in response, according to Palestinian reports.

The Israel Defense Forces (IDF) are launching the largest exercise in their history on Sunday, according to Kan News.

To span an entire month, the massive exercise called "Chariots of Fire" will have the Israeli army, navy, and air force practising combat and emergency scenarios in all regions. For the first time since the Israeli army was founded, the forces will be simulating a "month of war" to reportedly boost the IDF's readiness.

The drills will involve both regular and reserve IDF forces from all the commands and forces.

While the exercise will practice a sweeping and synchronised manoeuvre in the “depths of enemy territory”, it shall also focus on functioning both within the IDF and between organisations, involving the Home Front and civilian assistance.

Fire and manoeuvring in built-up areas are also cited as on the agenda for the drills. Throughout the exercises, research teams will be making assessments and drawing conclusions, while referencing conclusions drawn from previous General Staff exercises.

© REUTERS / RONEN ZVULUN
Palestinians react as Israeli police fire a stun grenade during clashes at Damascus Gate on Laylat al-Qadr during the holy month of Ramadan, in Jerusalem's Old City, May 9, 2021

According to the outlet, Chief of Staff Aviv Kohavi opted to proceed with plans to conduct the "Chariots of Fire" exercises despite flaring tensions in Jerusalem, the south and the north of the country.

Ahead of the announced drills, Hezbollah, a Shia paramilitary group and political party designated as a terrorist organisation in Israel, significantly increased its alertness in southern Lebanon and Syria, according to Kan News.

The level of alert was the highest since the Second Lebanon War in 2006, according to sources cited by Lebanese El-Nashra newspaper.

© REUTERS / AZIZ TAHER
FILE PHOTO: A supporter of Lebanon's Hezbollah gestures as he holds a Hezbollah flag in Marjayoun, Lebanon May 7, 2018.

The developments come as the Middle East Quartet - Russia, the US, the EU and the UN – voiced concerns over the recent surge of violence in East Jerusalem.

"We call upon Israeli authorities to exercise restraint and to avoid measures that would further escalate the situation during this period of Muslim Holy Days. We call on all sides to uphold and respect the status quo at the holy sites. All leaders have a responsibility to act against extremists and to speak out against all acts of violence and incitement. In this context, the Quartet Envoys reiterated their commitment to a negotiated two-state solution," the Quartet said in a Saturday statement.

© REUTERS / AMMAR AWAD
Israeli police gather during clashes with Palestinians at the compound that houses Al-Aqsa Mosque, known to Muslims as Noble Sanctuary and to Jews as Temple Mount, amid tension over the possible eviction of several Palestinian families from homes on land claimed by Jewish settlers in the Sheikh Jarrah neighbourhood, in Jerusalem's Old City, May 7, 2021.

As unrest flared around the Temple Mount and in the Sheikh Jarrah neighbourhood of east Jerusalem, the Palestinian Red Crescent said that a total of around 300 Palestinians have been injured in the past days, with 80 injuries reported on Saturday alone.

Last night Israeli forces raided homes of Palestinians in Sheikh Jarrah in Jerusalem & assaulted, tear gassed and arrested some of the young men. The families are facing forced displacement from their homes on Thursday where Jewish settlers will take over pic.twitter.com/Am3BeKA5Cs

​According to Palestinian reports, the IDF has responded to the unrest with tear gas and rubber bullets.

The riots followed a number of incendiary balloons launched from the Gaza Strip in recent days, with riots breaking out in Jerusalem amid protests against an Israeli court's decision to evict several Palestinian families from homes in the Jerusalem neighbourhood of Sheikh Jarrah.

On 10 May the Arab League plans to hold an extraordinary meeting to discuss the escalation of violence in East Jerusalem.

Israel on Alert for Any Potential Escalation at Border With Palestinian Authority, IDF Head Says