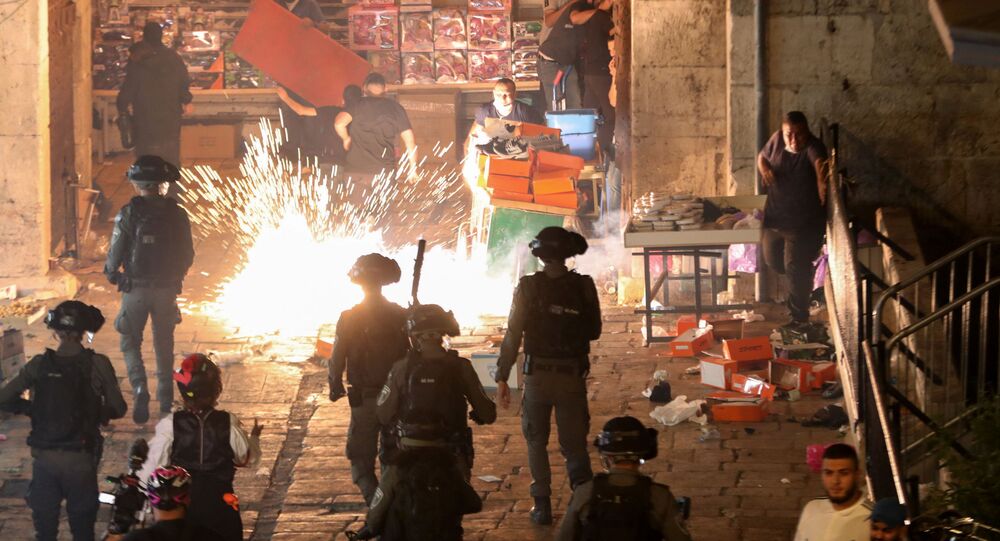 The city of Jerusalem saw altercations between Palestinians and Israeli riot police earlier on Friday, with tensions particularly fueled by an Israeli court decision that could lead to the evictions of many Palestinian families from the Sheikh Jarrah neighbourhood.

Israeli police beefed up security on Saturday in the wake of new protests in Jerusalem, following Friday's unrest involving Palestinian protesters clashing with officers - altercations that involved throwing stones and fireworks and had police responding with water cannons, rubber bullets and stun grenades.

A new round of protests has already started in the city of Jerusalem, particularly marking Ramadan's Night of Destiny.

Israeli police tweeted that they had enhanced security, noting that, while the right to protest will be "preserved", riots would be addressed with "zero tolerance".

"The commissioner instructed the commanders, with an emphasis on the sectors of Jerusalem, to increase forces in preparation for 'Night of Qadr' and another series of events expected in the city in the coming days", the police said.

​In videos shared on social media, demonstrators can be seen chanting slogans - according to media reports, calling to "strike in Tel Aviv" and "redeem al-Aqsa" - and lighting fires.

​Explosions are heard in other videos allegedly filmed at the border with Gaza.

​As unrest continued in Jerusalem, videos from the area of the Damascus Gate show clashes between protesters and officers, with the latter using stun grenades, while fireworks are seen exploding.

​One Israeli police car, according to footage from social media, had a Palestinian flag placed upon it.

​The unrest began earlier in the week, after weeks of tensions between Jews and Arabs, with Palestinians particularly triggered by Israeli authorities limiting access to holy sites in Jerusalem due to coronavirus restrictions. The situation was fueled by an upcoming Israeli court decision that could potentially evict dozens of Palestinian families from their houses in the neighbourhood of Sheikh Jarrah.

Clashes prompted reactions from many, with the US voicing concerns over the unrest and calling for a de-escalation on Friday, later on Saturday joined by the Middle East Quartet. The Turkish president condemned what he deemed "heinous attacks" against Palestinians, while Hamas and the Islamic Jihad vowed consequences and "retaliation".

Friday clashes saw at least 205 Palestinians injured, according to the Palestinian Red Crescent organisation, and Israeli police claimed that 18 officers were wounded.