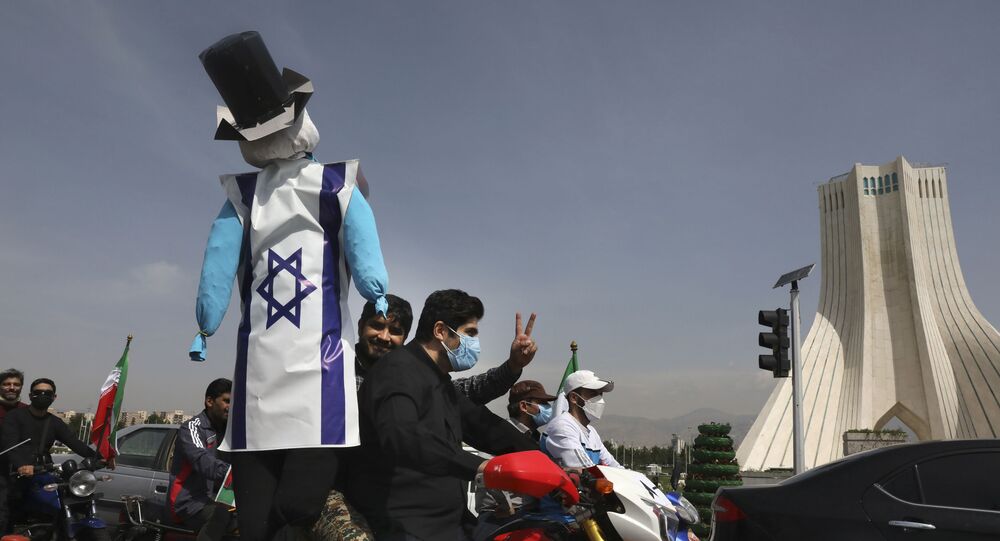 Friday marks International Quds (Jerusalem) Day, an Iran-led campaign of demonstrations and protests across the Muslim world aimed at showing solidarity with the Palestinian people and marking opposition to Zionism, the Israeli government and Israel's occupation of Jerusalem.

Israel is a "terrorist garrison" against Muslims and it is the "collective responsibility" and duty of all Muslims to fight against it, Iranian Supreme Leader Ayatollah Ali Khamenei has said.

"Since the first day, the Zionist turned the usurped Palestine into a terrorist base. Israel is not a country, rather it is a terrorist garrison against the Palestinian nation and other Muslim nations," Khamenei said in a televised speech on Friday dedicated to International Quds Day.

Calling the issue of Palestine "the most important" and relevant issue for the Islamic World (Ummah) today, Khamenei suggested that "the policies of the oppressive and cruel capitalism have driven a people out of their homes, their homeland and their ancestral roots and instead, has installed a terrorist regime and housed a foreign people therein."

The supreme leader went on to accuse Western nations of "blindly" supporting the "Zionist regime", and of using the faulty logic that because of the crimes of the Europeans against Jews during the Second World War, "they believe that the oppression against the Jews should be avenged by displacing a nation [the Palestinians] in West Asia and by committing a horrible massacre in that country!"

Khamenei suggested that the "situation in the world today" has shifted from what it was 70+ years ago, when Israel was founded, and that now, "the balance of power has swung in favour of the world of Islam."

Vahid Salemi
Demonstrators burn representations of Israeli and U.S flags during the annual Al-Quds, or Jerusalem, Day rally, with the Azadi (Freedom) monument tower seen at left, in Tehran, Iran, Friday, May 7, 2021. Iran held a limited anti-Israeli rally amid the coronavirus pandemic to mark the Quds Day. After the late Ayatollah Khomeini, leader of the Islamic Revolution and founder of present-day Iran, toppled the pro-Western Shah in 1979, he declared the last Friday of the Muslim holy month of Ramadan as an international day of struggle against Israel and for the liberation of Jerusalem.

"The electoral events in the US and the notoriously scandalous failures of the hubristic and arrogant elites in that country, the unsuccessful year-long fight against the pandemic in the US and Europe and the embarrassing incidents that ensued, and also the recent political and social instabilities in the key European countries are all signs of the downward movement of the Western camp," he claimed.

The ayatollah called on Muslim countries to unite in cooperation around the issue of Palestine and the holy city of Jerusalem, saying such unity would be "an absolute nightmare for the Zionist and their American and European advocates".

Screenshot/Edy Cohen
IRGC Chief Says Israel’s ‘Security Bubble Has Burst’ Amid String of Mysterious Security Incidents
He suggested that the Trump-proposed 'Deal of the Century' Israeli-Palestinian peace deal idea, and the US-led initiatives to normalise relations between "a few Arab governments and the Zionist regime" were mere "desperate attempts to run away from that nightmare".

Khamenei's comments follow remarks by President Hassan Rouhani on Thursday in which he criticised the international community's alleged lack of attention and concern for the suffering of the Palestinians and their displacement from their homeland.

Relations between Iran and Israel have been non-existent since the Iranian Revolution of 1979. During this period, the country's Islamic Republican authorities cut off diplomatic relations with the Jewish State, and have gone on to threaten its political disintegration or destruction at the hands of Islamic 'resistance forces'. Israel's political elites have taken these threats literally, and the two sides have waged a decades-long conflict accentuated by proxy wars, assassinations, cyberattacks, sabotage attacks, and other actions. Israel has also accused Iran of aspiring to build nuclear weapons, and has repeatedly threatened to stop this from happening using any means necessary, up to and including direct military action. Tehran has denied that it has nuclear weapons ambitions, and has accused international regulators of ignoring Tel Aviv's own (suspected) nuclear weapons programme. It has also warned Israel and its allies to think twice about any war, pointing to its vast arsenal of conventional missiles and allies throughout the region.