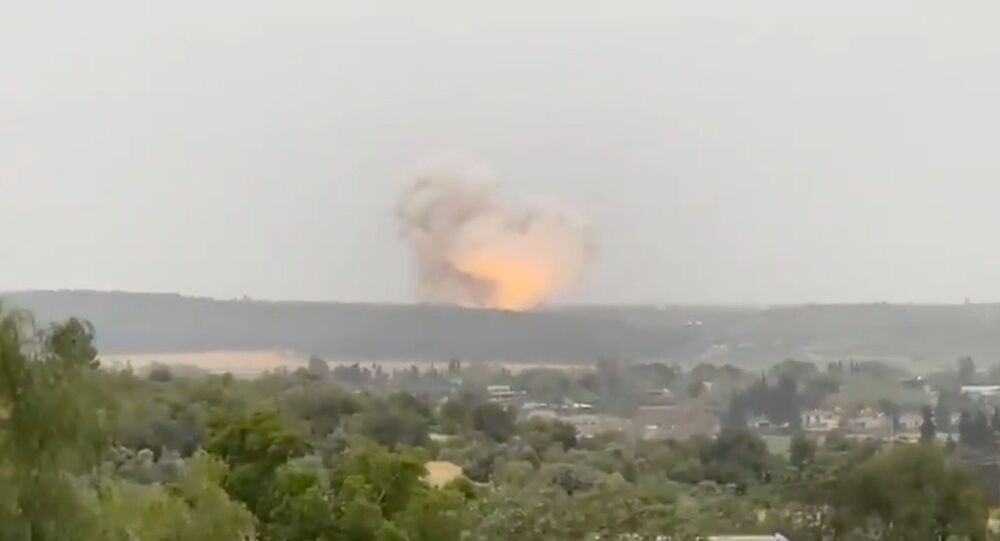 Tehran has repeatedly threatened to “exact revenge” against Israel following last year’s murder of a senior nuclear scientist and last month’s sabotage of a nuclear enrichment plant, stressing it will retaliate “at a time and place of its choosing”. Israel has neither confirmed nor denied its involvement in these incidents.

The recent string of serious and inexplicable security disasters befalling Israel is an indication that the country’s “national security bubble has burst”, with Tel Aviv suffering decay and the prospect of collapse from within, Maj. Gen. Hossein Salami, commander of Iran’s Islamic Revolutionary Guard Corps (IRGC) has claimed.

“The Zionist system is breaking apart, faltering and crumbling from within. Over the past year and a half, they tried to project a powerful image of themselves, to inflate themselves like a balloon,” the commander said, speaking in a televised interview cited by Tasnim.

This proof that the security bubble has burst has also been shown via last month’s explosion at an Israeli rocket factory, the recent Haifa oil refinery fire, the reported attack on a Mossad safehouse in Iraq, a string of cyberattacks targeting Israeli firms and the Syrian missile explosion just 40 km from Israel’s sensitive Dimona nuclear facility, Salami claimed. The commander derisively dismissed Israeli claims that the rocket factory blast was a ‘deliberate, controlled’ trial, suggesting such claims were an attempt at damage control. At the same time, he avoided claiming Iranian responsibility for any of these incidents.

A fire broke out in an oil refinery in Haifa, occupied #Palestine..
The reason is unknown. What's going on?!:)#الحريق_المقدس pic.twitter.com/NEcGO7DmJT

“This shows that the wave of strength which they sought to create has been unexpectedly extinguished, and today you can see the real face of the Zionist regime in its actual proportions, and these events can be repeated,” he warned.

Salami went on to suggest that Israel was at risk of political “disintegration” amid years of deadlock and instability in the wake of four consecutive elections in two years which have not enabled any party to form a stable governing coalition.

Ultimately, the commander warned that in the event of a major conflict, the narrow geographic space in which Israel’s military has to maneuver means that “a first blow can also be the last one.”

“The Zionist regime’s biggest weak point is that whatever tactical measure on its part can also be a strategic defeat, meaning that the regime can be destroyed through just one operation,” he said. He added that the United States would not be able to help Tel Aviv due to its weaknesses and a gradual breakup of “contiguity that used to be witnessed in the ranks of the world’s evil and arrogant actors.”

© Photo : Tasnim News Agency
Newly Appointed Deputy Commander of IRGC Quds Force Warns Israel Surrounded by ‘Resistance Forces’
Salami suggested that the US’s inability to help Saudi Arabia achieve victory in its war in Yemen, and its gradual withdrawal of forces from Afghanistan and Iraq, was another sign of this breakdown of unity, with the US itself “going through gradual departure from” and “expulsion” from the region, in his words.

Tel Aviv has not attributed any of the above-mentioned security incidents to Iran, and has gone out of its way to stress that the rocket factory explosion was part of a deliberate and “controlled” trial geared toward developing rocket technology. The Israeli military said it was surprised that the country’s air defences were unable to bring down the rogue Syrian rocket before it exploded near Dimona. The S-200 surface to air missile – designed in the Soviet period, was shot into Israel in response to an Israeli aerial attack on the Arab Republic on 22 April.

© CC BY-SA 2.0 / U.S. Embassy Tel Aviv / DSC_0461
Israel’s Intelligence Minister Warns Iran That IDF Warplanes ‘Can Reach Everywhere in Middle East’
Late last month, Israeli Intelligence Minister Eli Cohen called the Iran nuclear agreement which Tehran and Washington were working on restarting a “bad deal,” and warned that Tel Aviv’s warplanes could “reach everywhere in the Middle East” to stop the Islamic Republic in its alleged quest to obtain a nuclear weapon. Iran has said repeatedly that it has no plans to pursue such weapons, or any weapons of mass destruction, and pointed to Israel’s status as the region’s only actual (suspected) nuclear arms state.

Earlier this month, US media reported that President Biden had held talks with Mossad chief Yossi Cohen to discuss Iran and the ongoing nuclear deal negotiations.