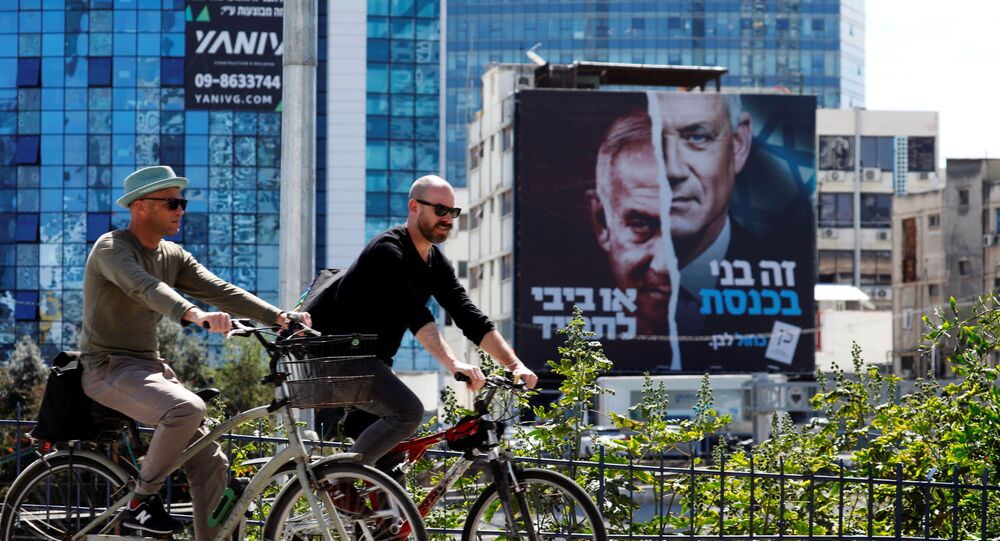 On 5 May, the PM is supposed to return the mandate to Israel's President Reuven Rivlin, if he fails to form a coalition by then. The head of state can then decide to task another candidate with the challenge. But as the anti-Netanyahu camp is struggling to come to terms with one another, the prospect of yet another general vote looms large.

Prime Minister Benjamin Netanyahu has less than one week until the mandate given to him to form a government expires.

The way it stands now, Israel's longest-serving PM is unlikely to form a coalition and Israeli media outlets project that once the prime minister's mandate ends, it will be given to either the head of the opposition, Yair Lapid or Naftali Bennett, the leader of the hawkish party Yamina. The latter received seven out of 120 seats in the Israeli parliament.

© REUTERS / Ronen Zvulun
Israeli Prime Minister Benjamin Netanyahu visits Mount Meron, northern Israel, where fatalities were reported among the thousands of ultra-Orthodox Jews gathered at the tomb of a 2nd-century sage for annual commemorations that include all-night prayer and dance, April 30, 2021

The two have already started a series of negotiations to establish an alternative to Netanyahu, efforts that have accelerated in recent days.

Although they still have plenty of gaps to bridge, the idea is the government that they wish to establish will be comprised of two prime ministers in rotation.

Bennett is expected to take the lead first, serving as the PM for the next two years. Lapid will take the reigns later.

Waiting for Another Vote

But the idea has already stirred division on Twitter and other social platforms, with many netizens saying they'd rather see Israel head to the polls for a fifth time than witness such a government being sworn in.

"Bennett... get real and take your seven seats with you. You have already proven that you are not interested in joining a right-wing government. We prefer a fifth round of elections than your united government that would rely on Lapid, [the left-wing] Meretz and the Joint Arab List".

"I prefer a fifth round not this leftist government!!!"

"I am dying to see the fifth round of elections. All the other options are horrible".

​Those users' concerns are understandable. A Lapid-Bennett government, if it does end up being established, will contain a lot of liberal and conservative parties that will find it hard to agree on anything except Netanyahu's ouster from office.

Such a paralysed government will not be able to come to terms on the issue of Jewish settlements in the West Bank. Nor will it be able to make progress on the Israeli-Palestinian front, the judiciary's involvement in politics, or the distribution of funds among the Israeli public.

© REUTERS / AMMAR AWAD
Protesters participate in a weekly demonstration against Israeli Prime Minister Benjamin Netanyahu's alleged corruption and his handling of the coronavirus disease (COVID-19) crisis, ahead of the March 23 general election, in Jerusalem March 20, 2021.

And this means the days of the Lapid-Bennett government might be numbered and that Israel will be heading to the ballot box once again.

Threat of a Fifth Round

Although some are thrilled at this possibility, others are frightened by such a prospect.

For many politicians, it might indicate the end of their political careers. Chances are high that Bennet or the current Minister of Defence Benny Gantz will not be able to repeat the success they had in March. Some lawmakers might not even pass the threshold of 3.25 percent.

But Israeli netizens have other concerns. For some, it is the fear of Israel wasting billions on a parliamentary vote at a time of economic uncertainty.

"There won't be any government even after the fifth round. So why waste 5 billion NIS ($1.5 billion) and come back to the starting point? Let's just wait for November or until Netanyahu's incapacitation".

For others, it is the fear that Israel's democratic values will be jeopardised, but the main worry is that this political uncertainty will keep Netanyahu in office.

​"I am against a fifth round but I still think that we will eventually get there. On the other hand, I think it is undemocratic that Bennett will be the one to lead the bloc. The leader of that bloc is Lapid and only he has the right to be the PM. Without any rotation".

"Fifth round - this is exactly what Bibi wants to achieve. Because that means he will be heading the interim government and that government can make appointments that can help him evade his trial".