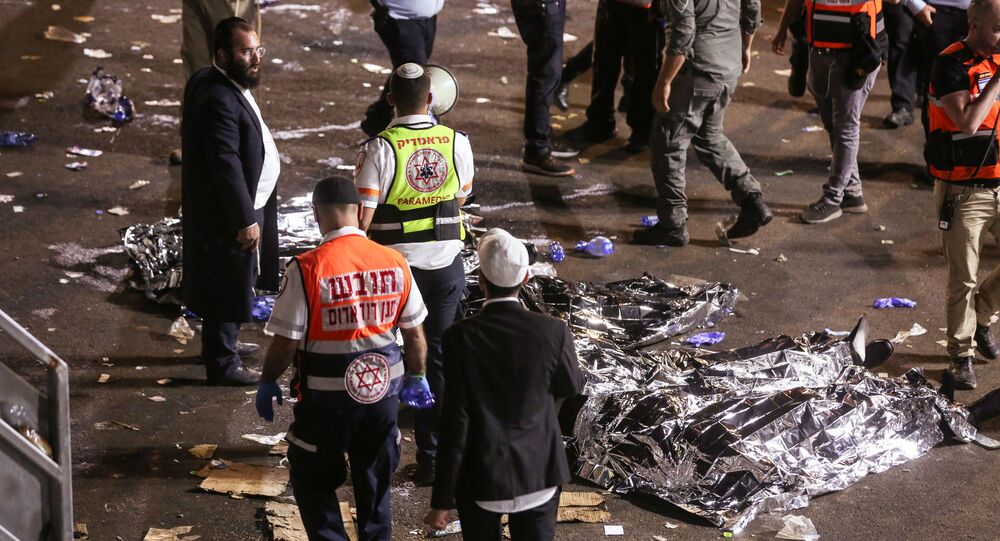 Prime Minister Benjamin Netanyahu announced Sunday as the national day of mourning in Israel as the country griefs its 44 victims killed at the stampede on Mount Meron. Investigation is also under way with authorities struggling to understand what could have caused the disaster regarded as one of the Jewish state's biggest.

The traditional bonfire lighting ceremony at Mount Meron in the north of Israel was supposed to be an event of joy and celebration for the nearly half a million worshippers, who flock to the site on a yearly basis to mark the Jewish holiday of Lag Ba'Omer.

A Celebration That Turned into a Disaster

But during the night it turned into a disaster. At least 44 people have lost their lives, many of them were children. More than 150 others have been wounded. Six are in critical condition.

David Perlamutter from Jerusalem has been one of those, who has seen the disaster unfolding.

"There was a lot of panic. I am not even sure what triggered it but people started leaving the hall, where the lighting ceremony took place. They tried to squeeze themselves through the narrow corridors and onto the exit which contained a staircase, " he recalled.

That staircase was probably the reason for what turned into one of Israel's biggest disasters.

Although the investigation is still under way and the reasons are yet to be revealed, eyewitnesses suggest that the unbearable heat caused worshippers to spray themselves with water, which turned the area wet and slippery causing one person to fall and eventually leading to many others to follow suit. By the time, the police was able to stop the stampede, the damage was already beyond repair.

Perlamutter and the group he was with were lucky enough not to get injured but he says the traumatic pictures he saw will haunt him forever.

Now, when all the bodies have been collected and most injured people have reached hospitals, Perlamutter says Israel will need to do a self examination to hold those, responsible for disaster, accountable.

Who Is to Blame?

This, however, will be a hard task and the reason for this is that no ministry is ready to take full responsibility for the mess on Mount Meron.

Many are blaming the police for not restricting the huge masses arriving into the scene. They also blame the security forces for setting up fences that prevented people from fleeing. Others vent anger at the ministry of transportation that failed to assist in evacuating the people.

Yet, Perlamutter says the problem has much deeper roots.

"There is no centralized body that takes care of such events. Although the ministry of transportation provided some busses and the police was giving security, the communities that attend the ceremony do pretty much what they want, defying any security regulation and there is nobody, who can enforce order".

The problem is that these accusations are nothing new. In 2008, the State Comptroller of Israel released a report warning about the yearly religious celebrations that take place on Mount Meron. Back then, it explained that the site is too old and poorly maintained and that there was no ministerial office that took responsibility for holding such mass events attended by hundreds of thousands of people.

Two years after the report was published, the State Comptroller went to check whether its recommendations have been implemented, only to find out that everything remained unaltered.

"There are no organised paths and routes in the area. People build here illegal caravans, set up parking lots wherever they want. There is no supervision. And, what's worse, there is no proper planning".

Under these circumstances, Perlamutter fears that the events of last night can easily repeat themselves but he says that if the country learns from its past mistakes, another tragedy can be avoided.

"It is not an over-complicated matter. All they need to do is to appoint a body that would centralise such events. They need to mark routes and paths and they need to set exits and entrances like they do at stadiums. In short, they need to take these matters more seriously".

Right now, says Perlamutter, nobody cares. And until the Israeli government decides to change its attitude, the disasters that the country witnessed during the night will continue to happen.