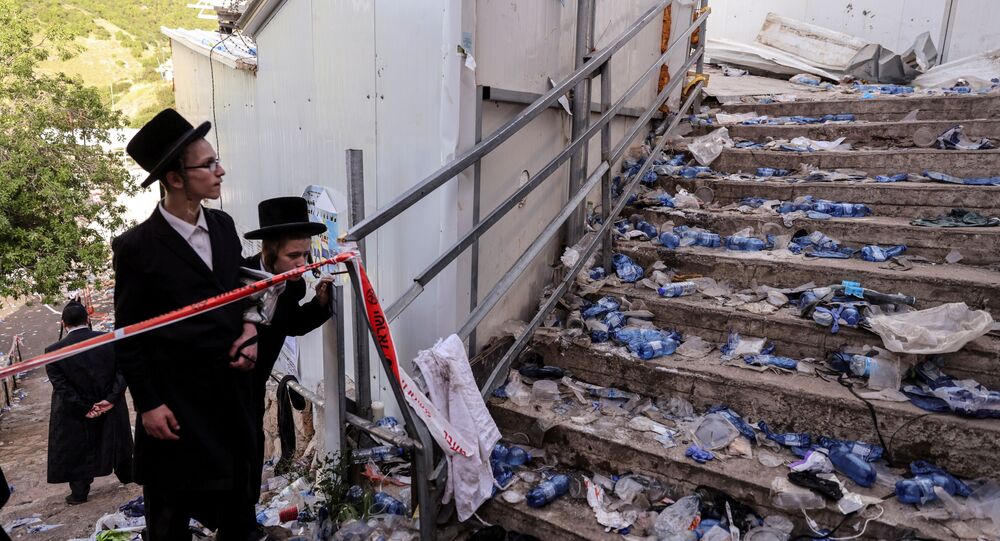 At least 44 people were killed and over 150 injured in a stampede on Friday during a pilgrimage to Mount Meron, northern Israel, on the occasion of Lag BaOmer, an Orthodox Jewish holiday marking the death of a major 2nd century tannaitic sage. Most of the victims are believed to be members of Israel's Haredi Jewish community.

Israeli Prime Minister Benjamin Netanyahu has declared Sunday a national day of mourning following Friday's deadly stampede, and called the incident "one of the worst disasters" in Israeli history.

"The Mount Meron catastrophe is one of the worst to ever befall the State of Israel. I ask for Sunday to be declared a national day of mourning," Netanyahu said in a video address published on his Twitter page Friday afternoon.

The prime minister arrived at the scene of the disaster area earlier Friday to assess the damage, and expressed condolences to victims and their families. "There were heartbreaking sights here, people crushed to death, including children," he tweeted. He added that authorities were still working to identify the victims, and asked people to avoid spreading rumours on social media to avoid any additional worry for those with family members who took part in the religious pilgrimage gone horribly wrong.

Netanyahu went on to praise the rapid rescue response by police, rescue and security services, saying "they prevented a much bigger disaster." He promised to conduct a "thorough, serious and in-depth investigation" to prevent such a tragedy from recurring.

Online, some Israelis have called for Netanyahu's resignation in connection with the tragedy, suggesting the stampede could have been prevented if the government ordered the Orthodox community to follow the same coronavirus-related health guidelines in place for everyone else and prohibited mass gatherings. Some also accused the government of permitting too many people at the festival for 'political reasons'. The government has yet to respond to the allegations.

© REUTERS / STRINGER
Medics and rescue workers attend to the Lag B'Omer event in Mount Meron, northern Israel, where fatalities were reported among the thousands of ultra-Orthodox Jews gathered at the tomb of a 2nd-century sage for annual commemorations that include all-night prayer and dance, at Mount Meron, Israel April 30, 2021

At least 44 people were crushed to death and over 150 others hurt in a stampede and stand collapse at the Lag BaOmer event on Mount Meron in northern Israel early Friday morning, where some some 100,000 pilgrims from across the country gathered. Police, emergency services, the military and rescue buses were deployed to the scene, but the latter had difficulty entering the area due to the closure of access roads. Half a dozen helicopters were used to evacuate the wounded.

A preliminary police investigation indicated that the location where the event was held was structurally sound, and that the incident resulted from people slipping on stairs in a narrow pathway and falling on top of one another. Additionally, the facility was designed to accomodate 10,000 people, not the roughly 100,000 who arrived. The spike in numbers at this year's festival followed limitations put in place last year during Israel's Covid-related national lockdowns.

Lag BaOmer is a holiday celebrated mostly by Haredi Orthodox Jews (i.e. those strictly adhere to Jewish religious laws), and marks the anniversary of the death of Rabbi Shimon bar Yochai, a major religious scholar of ancient Judea. Pilgrims traditionally convene at Mount Meron near his tomb to perform various rituals.

Haredi Jews consist of about 12 percent of Israel's population, are highly conservative in their beliefs and social customs, value modesty and hard work, and have a mostly negative attitude toward Zionism and the establishment of the State of Israel in general. Many are allowed to avoid the country's universal conscription, or enjoy deferred or reduced service.

© REUTERS / RONEN ZVULUN
An Ultra Orthodox Jew stands next to left over glasses on Mount Meron, northern Israel, where fatalities were reported among the thousands of ultra-Orthodox Jews gathered at the tomb of a 2nd-century sage for annual commemorations that include all-night prayer and dance, April 30, 2021

Friday morning's tragedy was the worst civil disaster in Israel since the Mount Carmel forest fires of 2010, which killed 44 people.