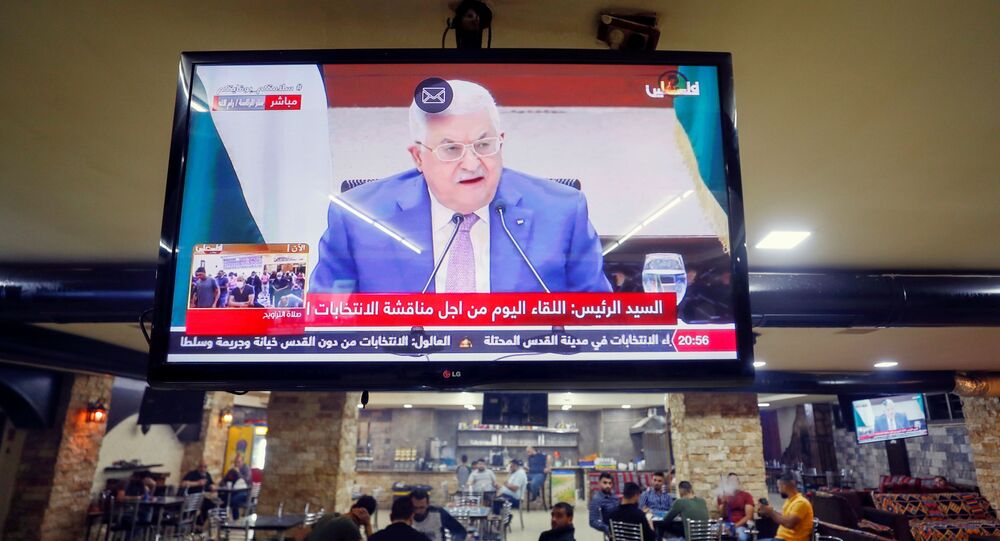 Israel's separation wall cordoning off large portions of the West Bank from Israel has divided East Jerusalem's suburbs from its central city. As a result, about 150,000 of its 314,000 Palestinian residents live outside the walls under Palestinian Authority governance, while the rest are under the city's Israeli administration.

Palestinian President Mahmoud Abbas said early Friday morning that the anticipated Palestinian elections will be postponed "until the participation of our people in Jerusalem is guaranteed."

"Israel is still determined not to allow elections to take place in Jerusalem, and we, on our part, have repeatedly tried to hold gatherings of representatives and candidates of the electoral blocs [in Jerusalem], but were attacked and barred from holding any activity," Abbas said, according to the WAFA news agency. "Today, a message came from Israel and the United States stating: 'We cannot give you an answer on Jerusalem because we don't have a government to decide that and we're busy with the [Israeli] elections. This excuse is not convincing."

"We want the elections to be held in Jerusalem as they are in Ramallah, including the election campaigning, the arrival of candidates, and the freedom of action of the Central Elections Committee," Abbas continued, adding that the Israelis had said if the Palestinian Central Elections Commission president, Hanna Nasser, were to go to Jerusalem, "we should send a lawyer with him to defend him upon his arrest."

Abbas also said that Palestinian leaders had decided to form a "national unity government" that would respect the agreements made by the Palestine Liberation Organization (PLO).

The president announced the decision after a post-iftar meeting on Thursday night to which all Palestinian leaders were invited. However, Hamas and Palestinian Islamic Jihad, two militant factions that operate in the Gaza Strip, boycotted the meeting in protest of what was sure to be a vote delay.

“Our position regarding the elections is clear: Rejection. We will not countenance or provide cover for the delay of the elections,” Hamas' electoral campaign said on Thursday, as quoted by the Times of Israel.

According to the Associated Press, Hamas quickly denounced the election cancellation on Friday as a "coup."

News of the decision prompted celebrations at Jerusalem's northwestern Damascus Gate, the site of recent violence between Palestinian and Israeli groups.

​In January, Abbas called for new legislative elections in May and a presidential election in July, both of which would be the first since 2006. However, it was not the first attempt at elections since then, with past attempts collapsing amid the myriad of issues to be settled both with Israel as well as between competing Palestinian factions.

East Jerusalem is a major sticking point. Both Israel and the Palestinians claim the holy city as their capital, and Israel claimed to annex the territory in 1980 against international law. However, Israel agreed in the 1994 Oslo Accords that elections would take place in East Jerusalem at designated post offices.

"The elections must take place in Jerusalem, our eternal capital, and its people should be allowed to become candidates, vote and take part in campaigns. Anything other than this means returning to the Deal of the Century," read a statement issued by Fatah, the Palestinian party that dominates the Palestinian Authority and to which Abbas belongs.

Over 100 Injured in Clashes With Police in Jerusalem, Reports Say