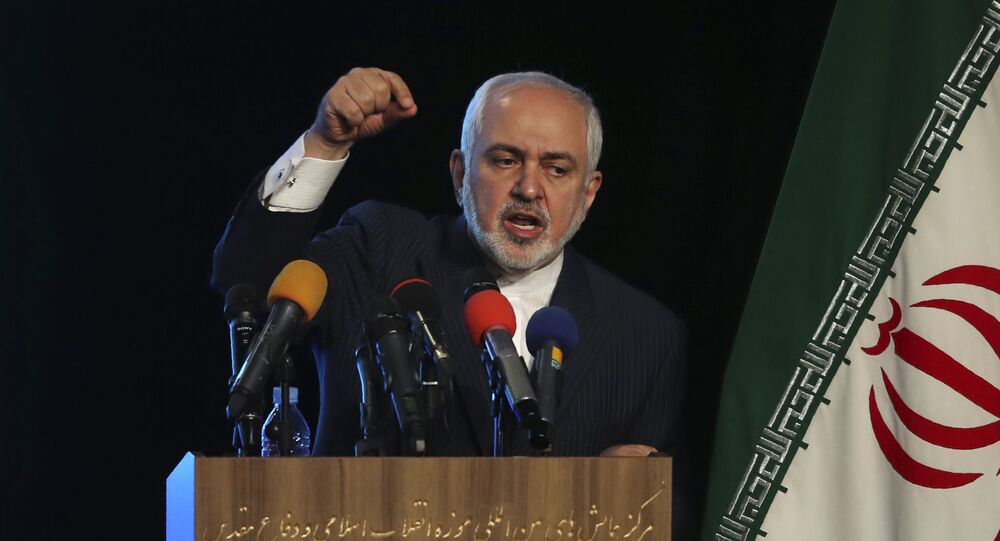 Iranian President Hassan Rouhani earlier ordered an investigation into the leak of an audiotape of Foreign Minister Javad Zarif's interview, not intended for public release, where he alleges that his diplomatic efforts within the government are overshadowed by the demands of the Islamic Revolutionary Guard Corps (IRGC).

Iran's Foreign Minister Mohammad Javad Zarif has expressed deep regret over the potential fallout from a recently leaked audio of him expounding on the decision-making process in the Islamic republic.

In a post on his verified Instagram account, Zarif made the first official reference to published extracts of his conversation with Iranian economist Saeed Laylaz, where he alleged that the military wielded too strong a role over diplomacy efforts.

"I was very sorry that a secret theoretical talk regarding the need for synergy between diplomacy and the (military) field ... turns into domestic infighting and the honest and passionate pathology of some processes is framed as personal criticism," he wrote on Wednesday.

According to the top Iranian diplomat, the "main point" of his remarks in the audiotapes, the authenticity of which has not been denied by Tehran, is emphasising "the need for a smart adjustment of the relationship between these two wings" of Iran's power.

Iran's Foreign Minister underscored the importance of "setting priorities through legal structures and under the great purview of the supreme leader".

The publication of transcripts of Mohammad Javad Zarif's interview, reportedly first obtained by London-based news outlet Iran International, was slammed by Hassan Rouhani as an attempt to sow 'discord' during ongoing Iran nuclear talks in Vienna.

Earlier, the Iranian President, according to his spokesman, suggested the media outlet that purportedly supports sanctions against Iran had conceived the report as part of a deliberate conspiracy.

As a probe into the circumstances of the leak was launched, it was underscored that the interview – part a project to document the history of the eight years of Rouhani's government – was supposed to be classified and stored in the archives to be studied or used in the future.

As the Iranian Foreign Ministry condemned publication of parts of the interview in the media, it lambasted the outlet for "cherry-picking" many things out of context.

In the bombshell audio Iran's Foreign Minister Mohammad Javad Zarif intimates that his diplomatic powers in the government are “limited”, as it is the Islamic Revolutionary Guard Corps (IRGC) that calls the shots in Tehran.

Furthermore, Zarif alleged that late General Qasem Soleimani, commander of the Quds Force, who was assassinated in a targeted US air strike on 3 January, often got in the way of his work.

The Iranian major general, according to the minister, attempted to hinder the signing of the Joint Comprehensive Plan of Action (JCPOA) - known commonly as the Iran nuclear deal.

The agreement on the Iranian nuclear program was reached in Vienna on 14 July 2015 between Iran and the five permanent members of the United Nations Security Council - China, France, Russia, United Kingdom, United States—plus Germany.

Zarif also praised his collaborative efforts with Soleimani ahead of the US interventions in Afghanistan and Iraq, deploring his assassination by US forces as a huge loss for Iran.

The conversation between Zarif and Saeed Laylaz was supposed to be part of an "oral history" research project by the Iranian economist, according to Iran Foreign Ministry spokesman Saeed Khatibzadeh.

"It was part of a routine and confidential dialogue that takes place within the administration […] The Foreign Ministry had no role in selecting the interviewing team and operators and in keeping the files. We do not know who did this and why."

The developments come as world powers and Iran seek a compromise over how to bring Washington and Tehran back into compliance with the 2015 nuclear accord, which was unilaterally scrapped by the US under then-president Donald Trump in 2018.

A third round of meetings has begun in Vienna involving representatives of Iran, Britain, China, France, Germany and Russia to hammer out a solution over what sanctions the United States will need to lift, and what steps Tehran will need to take to revive the JCPOA.