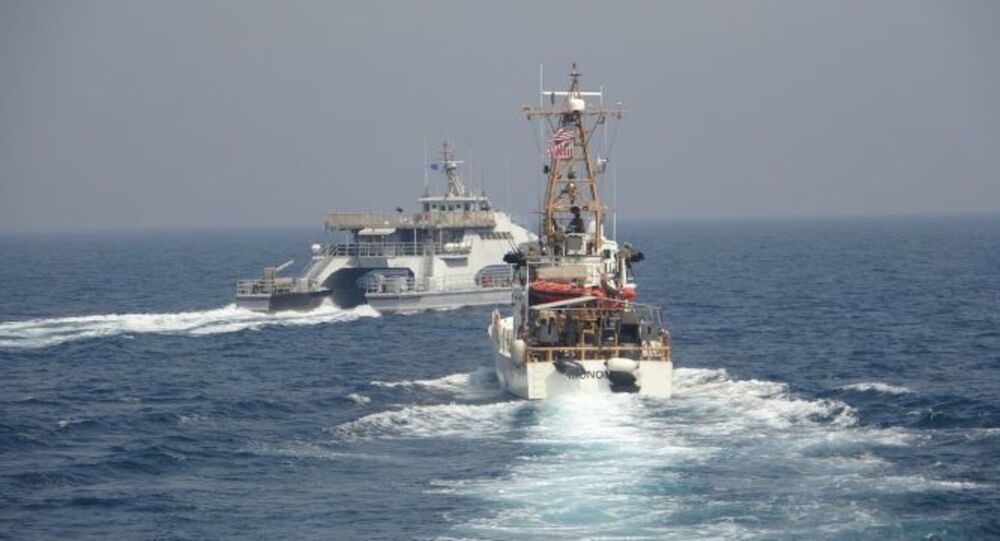 American and Iranian vessels previously came in close contact earlier this month in the international waters off the southern Persian Gulf, however, the April 2 encounter did not result warning shots.

The US Navy revealed on Tuesday that US forces recently fired several warning shots against three vessels enlisted in the Iranian Islamic Revolutionary Guard Corps Navy (IRGCN)after they came in close contact with American service members.

The incident, which unfolded in the international waters off the northern Persian Gulf, took place on April 26 at approximately 8 p.m. local time and involved American vessels USS Firebolt and the US Coast Guard patrol boat Baranoff.

The service's Tuesday release indicates that an IRGCN vessel had come within an "unnecessarily close range with unknown intent," and that its closest approach was 68 yards to both US ships.

"Firebolt and Baranoff were conducting routine maritime security operations in international waters during the time of the incident," the release reads. "The US crews issued multiple warnings via bridge-to-bridge radio and loud-hailer devices, but the IRGCN vessels continued their close maneuvers."

"The crew of the Firebolt then fired warning shots, and the IRGCN vessels moved away to a safe distance from the US vessels," the notice explains, adding that American forces had "proactively communicated" with Iranian forces in an effort to "reduce the risk of calculation, avoid a collision" and, of course, to "de-escalate the situation."

The #US have released a statement and footage of 26th April interaction between 3 #Iran|ian (#IRGC Navy) fast attack craft and #USNavy USS Firebolt and USGC Baranof that involved warning shots fired from Firebolt pic.twitter.com/HZPN3fsuDJ

The April 26 incident comes weeks after the US Navy announced that several Iranian fast-attack crafts had approached two US vessels while carrying out maritime patrols in the region. The April 2 altercation lasted for some three hours.

The tense encounter also comes on the heels of renewed talks between US and Iranian officials seeking to normalize ties and restore stipulations agreed to under the 2015 Joint Comprehensive Plan of Action.

The US officially withdrew from the nuclear deal in 2018 over allegations that Iran had violated the agreement. As a result, Washington reimposed a series of previously lifted sanctions and carried out a "maximum pressure" campaign against Tehran.

Both the US and Iran have called on one another to act first before either party agrees to come back to the terms listed in the JCPOA. Iran has repeatedly indicated that it will only agree to the terms that were previously drawn out, whereas the US officials have weighed the possibility of add-on stipulations.