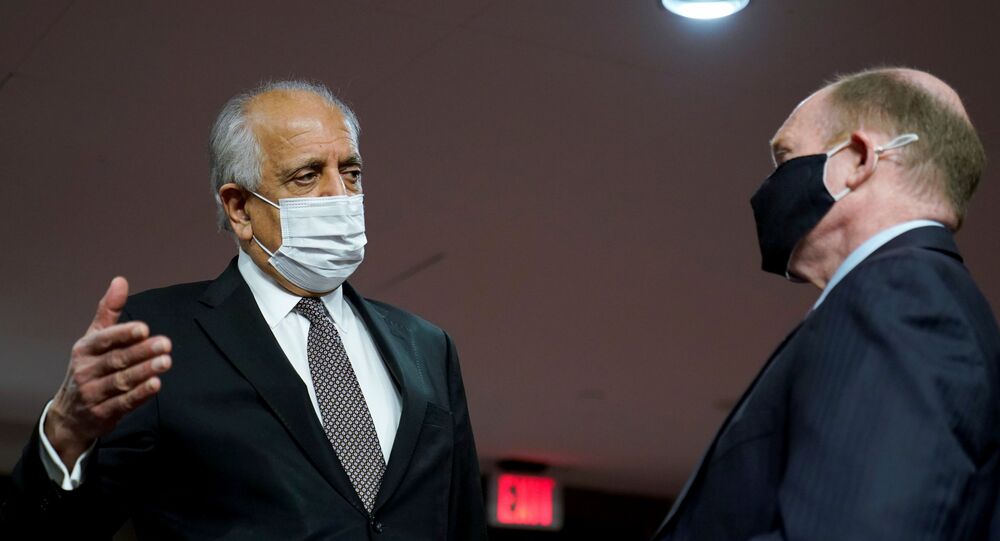 WASHINGTON (Sputnik) - The Taliban movement will face sanctions and isolation from the United States and its allies if it obstructs efforts to reach a peace deal in Afghanistan, US Special Representative Zalmay Khalilzad said in a congressional hearing on Tuesday.

According to him, the Taliban must admit that they have a choice between two options for the future.

"But if they obstruct a negotiated settlement and instead pursue a military takeover, they will be opposed not only by the United States but by our allies, partners, and the region. They will face isolation, regional opposition, sanctions, and international opprobrium," Khalilzad said during a Senate Foreign Relations Committee hearing on Afghanistan.

The special representative stated that the Afghan peace agreement reached by the US and the Taliban movement was the best possible deal under the given circumstances.

“Under the circumstances, with the desire of the United States to withdraw its forces from Afghanistan, the agreement that we struck with the Taliban was the best possible,” Khalilzad said.

Khalilzad however, noted that the US would be caught in a war with the Taliban if US leaders decided to remain in Afghanistan for more than a year.

Countries in the region have a shared interest in ensuring a stable Afghanistan and partners like Pakistan must do more to keep the Taliban from pursuing a military takeover of the country, Khalilzad said.

Khalilzad also added that Pakistani leaders understand their country will face serious consequences if neighboring Afghanistan should erupt into a civil war between the Taliban and Afghan government.

"Pakistan’s leaders have emphasized publicly and to US officials that they do not support a military takeover by the Taliban. I believe they understand that not only Afghanistan, but their country too will face grave consequences in the event of a return to a wider civil war," Khalilzad said during the hearing.

The Special Envoy mentioned repeatedly that he does not believe the government of Afghanistan will collapse after the United States and NATO withdraw ground forces by May 1.

Nevertheless, the United States is developing contingency plans to prepare for a potential refugee crisis in Afghanistan should the country descend into a civil war after US and NATO forces leave, Khalilzad said, adding that the current plans have not been finalized yet.

The deployment of UN peacekeepers in Afghanistan following the withdrawal of American forces is a possibility, but it hasn’t come up yet, Khalilzad told the Senate panel. The US envoy added that the United States asked the United Nations to play a more active role in “promoting, facilitating” the peace process in Afghanistan.

Earlier, the US administration announced that by May 1 it will begin and by September 11 will complete the full withdrawal of troops from Afghanistan in full coordination with its allies. The Taliban has repeatedly stated that the US must comply with the previously agreed deadline for the withdrawal, which was May 1, in accordance with the US-Taliban deal reached in early 2020 by the Trump administration, or the movement will attack all the foreign forces remaining in the country after that date.

There is currently a confrontation in the country between government forces and the Taliban, who have seized significant territories in rural areas and launched an offensive against large cities. Afghanistan's National Defense and Security Forces are conducting joint counter-terrorism operations across the country.

Peace talks kicked off between the Afghan government and the Taliban on September 12, 2020 in the capital of Qatar.