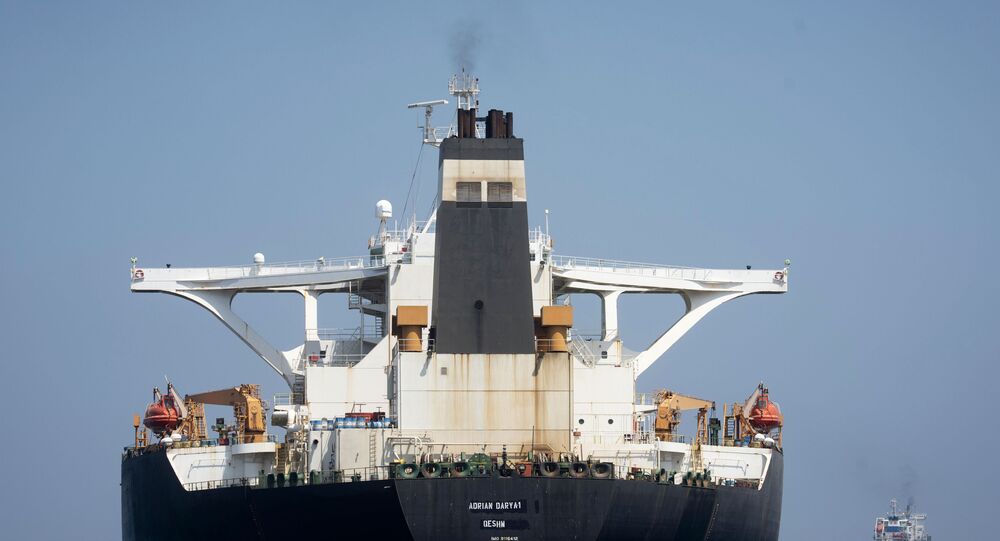 On Saturday, Iran's al-Alam TV identified the vessel as one of three Iranian oil tankers that recently arrived at the Syrian oil terminal of Baniyas, while the Islamic Republic's semi-official news agency Tasnim denied it was an Iranian ship.

Syria's Oil Ministry has reported that firefighters extinguished a fire on board an oil tanker off the nation's Baniyas refinery following a suspected attack by an unmanned aerial vehicle (UAV).

The state-run Syrian news agency SANA quoted the ministry as saying the blaze erupted after "what was believed to be an attack by a drone from the direction of Lebanese waters". SANA provided no further details and did not clarify what country the tanker arrived from.

From what we can tell in today's footage posted by @nournews_ir, this video was recorded from the ARMAN 114, which arrived in Syria with 1.3 million barrels of crude oil via the Suez Canal instead of sailing around Africa with 2 million barrels. The Suez has its limits... pic.twitter.com/Vy14f0bLyk

The pan-Arabian satellite television channel Al-Mayadeen, in turn, claimed the tanker was suspected of having been damaged by an Israeli UAV, with the Jewish state's military declining to comment on the matter.

While speculation was rife that the ship was one of three Iranian oil tankers that had recently arrived at Baniyas, the website TankersTrackers.com claimed the ship "[…] is not an Iranian vessel, but a Beirut-registered tanker called WISDOM".

According to the website, the vessel "assisted the Iranian VLCC [Very Large Crude Carrier] supertanker ARMAN 114 (ex. ADRIAN DARYA-1) by offloading 300-350K barrels at a time due to depth restrictions".

"SANA" quoted a source in the MOO that an oil tanker off the coast of "Banias" was targeted by what is believed to be an attack by a drone from the direction of Lebanese territorial waters, "which led to the outbreak of a fire in one of the tanker's tanks pic.twitter.com/CUTS0EASM9

The Baniyas refinery along with another located in the province of Homs reportedly covers a considerable part of Syria's demand for diesel, gasoline, heating fuel, and other petroleum products.

This is not the first incident involving an Iranian oil tanker. The Grace 1-turned-Adrian Darya-1 was detained by UK marines off the coast of Gibraltar on 4 July 2019, as London claimed the vessel was transporting crude oil to Syria in breach of EU sanctions imposed on Damascus.

The Iranian Foreign Ministry subsequently condemned the seizure as an act of pure piracy and something setting "a dangerous precedent".

© CC0
Tanker Off Syrian Shore Reportedly Catches Fire After Suspected Drone Attack From Lebanese Waters
On 15 August 2019, the tanker was released by Gibraltar's authorities, who stated there was insufficient reason to hold it, despite a US request to continue the seizure and the issuance of an American warrant to detain the ship. Iran, for its part, gave assurances that the vessel would not transport oil to Syria.

Shortly afterwards, Iranian Foreign Ministry spokesman Abbas Mousavi said the tanker had made it to its destination, and sold its oil. He did not clarify whether the ship's crude oil cargo had been delivered, only saying that the ship had docked "on the Mediterranean coast".