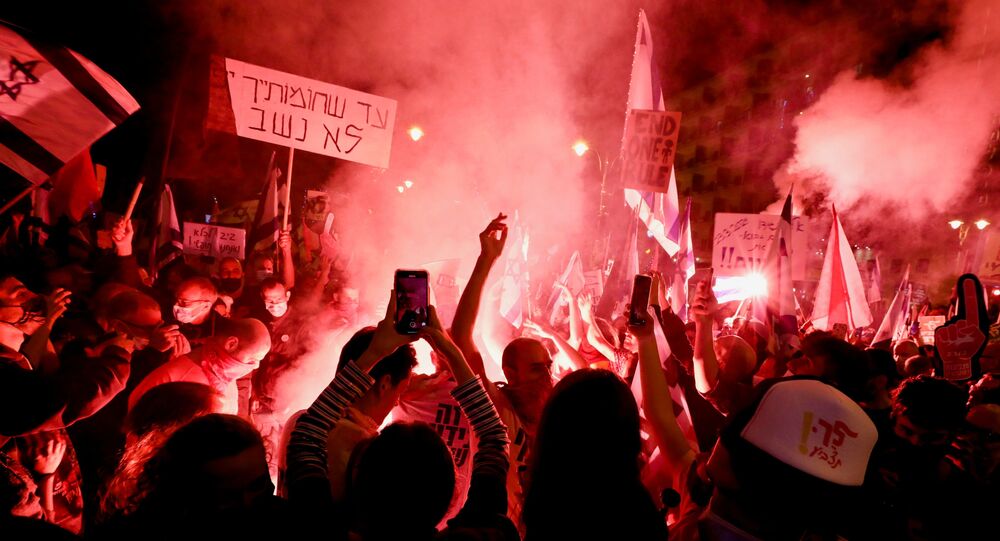 The anti-Netanyahu protest movement peaked in mid-summer of 2020, with tens of thousands taking to the streets in Tel Aviv and Jerusalem, as well as thousands more at bridges and intersections across the nation. Since then, they have significantly decreased in scale, but they exploded again on the eve of the parliamentary elections in March.

On Saturday night, hundreds of Israelis gathered outside Prime Minister Benjamin Netanyahu's official Jerusalem residence to demonstrate against the prime minister, who is facing corruption charges, the Times of Israel reported.

As demonstrators attempted to block traffic, police closed several roads, according to the report.

The demonstrations took place as Netanyahu's corruption trial ramped up to three hearings a week, and as the Likud leader struggles to form a government after four elections in two years.

​With the March election results maintaining the political gridlock of the previous three elections, it is uncertain if either the pro-Netanyahu bloc or the anti-Netanyahu bloc will be able to form a coalition.

As can be seen on videos from the protests shared online, the demonstrators carried inflatable submarines as usual, a symbol of the last year's ongoing protests against the alleged corruption of the prime minister.

​Last Saturday, demonstrations were also held outside Netanyahu's residence in Jerusalem and his private house in Caesaria. The protesters urged politicians to unite against the prime minister and form a new government independent from him in a bid to eliminate the possibility of a fifth consecutive parliamentary election.

For months, protesters have been conducting weekly demonstrations against Netanyahu, demanding that he resign in the wake of his bribery, fraud, and breach of trust trial. Netanyahu denies wrongdoing and says the indictments are part of a campaign to oust him from office by political opponents.

On March 20, in what was the last mass rally before the recent Knesset elections, one of the biggest protests to date took place. On that Saturday evening, tens of thousands of protesters assembled in Jerusalem, according to reports.