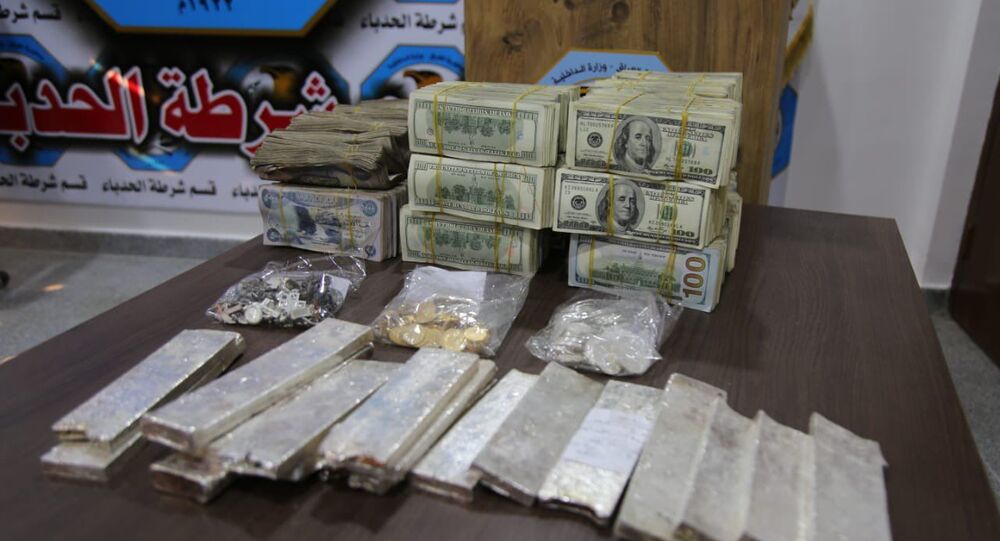 According to local authorities, the money was looted by militants at the time they controlled Mosul. The city became the major stronghold of Daesh* in 2014 and was only liberated in 2017 thanks to a military operation by the Iraqi Army and the Iraqi Popular Mobilization Forces.

The Iraqi security forces have uncovered millions of cash and precious metals hidden and buried by Daesh in one of the residential houses in the old area of Mosul.

According to a statement by the interior ministry, the cache contained $1.59 million in one hundred dollar bills, 17.5 million Iraqi dinars (about $12,000), 5 kilograms of silver and about 500 grams of gold, prepared for minting coins for internal circulation in the Daesh "state", and 17.5 kilograms of silver bars.

“The Nineveh Governorate Police Commander, Major General Laith Khalil Al-Hamdani, announced that [...] based on specific information, [local police] was able to find sums of money seized by [terrorists] during [their] control of the city”, the spokesman of the commander-in-chief of the Iraqi forces, Yehia Rasool, tweeted.

He also shared pictures taken at the scene, which he called “Office of Finance, belonging to the gangs of Daesh.”

​Though Baghdad announced victory over Daesh in late 2017, the Iraqi army, supported by the international coalition and Popular Mobilization Forces, has continued operations to purge terrorists and identify the sleeper cells of Daesh in certain areas.

In November 2020, Iraqi Foreign Minister Fuad Hussein said that Daesh had stepped up its activities in the country in recent months, including in parts of the western province of Anbar, in Kirkuk and Diyala provinces and in parts of Nineveh province in the country's north.