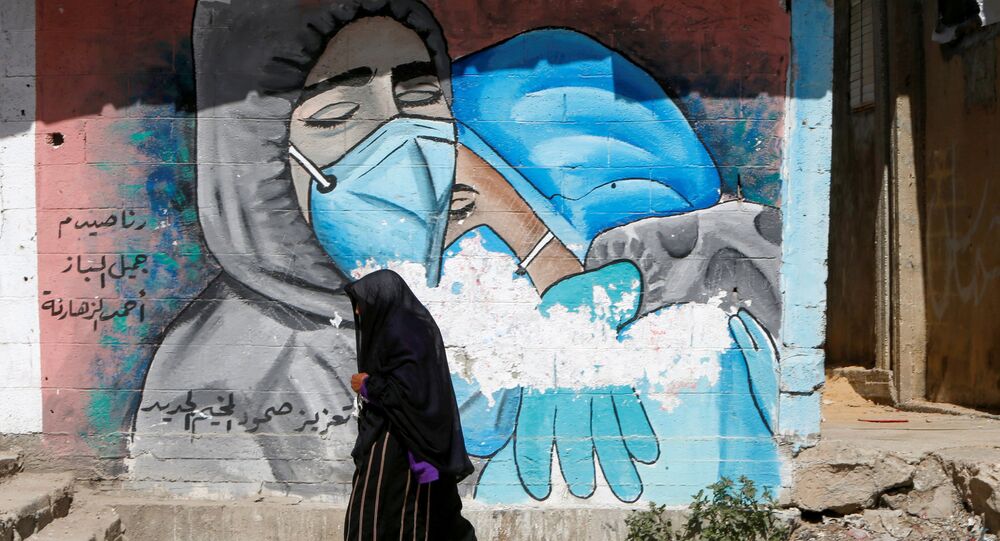 The number of active cases in the Gaza Strip stands at over 20,000, more than double what it was during the previous wave several months ago. As the number of daily infections continues to climb, Hamas, which controls the Strip, has shut down the Palestinian enclave - and that spells trouble for the economy.

Kamal Ibrahim, a Palestinian man from the Shajaeya neighborhood in the east of the Gaza Strip, has always been waiting for the month of Ramadan that this year commenced on Tuesday, 13 April.

For him, as well as for millions of others around the world, Muslims' holiest month has always been a time for reflection, celebration and festivities.

"Every year, my family of nine and I have been waiting for this month. We have been preparing the house for festive dinners, special dishes, desserts and decorations".

This year, however, they will have little to celebrate. With COVID-19 still raging in the Gaza Strip, active cases standing at more than 20,000 and with 35 percent of all tests coming out positive, Hamas authorities that control the Palestinian enclave have decided to impose a number of restrictive measures to curb the spread of the virus.

The education system has been shut down, as have the mosques, many public places and private businesses. The police presence has been beefed up on the streets to make sure people avoid gatherings and a night curfew has been put in place starting at 9 p.m. local time.

For Ibrahim, these and other moves have been suffocating, especially given the toll they've taken on Gaza's economy.

According to official reports, the spread of the pandemic and the measures taken by the Hamas government have pushed poverty and unemployment rates to new heights.

In the second quarter of 2020, almost half of the working-age population among Gaza's 2.048 million people were jobless; 54 percent were reportedly living in poverty.

Ibrahim feels the impact of COVID-19 on his own pocket. As a vendor who sells vegetables at local markets, he says his revenue dropped significantly with the outbreak of the virus in February of last year.

As it continued to rage and people kept losing their jobs, many found themselves unable to pay for the mere basics, including food and accommodation.

The month of Ramadan that's typically associated with festivities and booming markets does not promise to make the situation any better. Quite the opposite is true: it will only highlight Gazans' daily hardships.

"This year, we will be spending Ramadan under strict measures imposed by Hamas. Apart from the fact that we are under a curfew, we are also facing a three-day long lockdown. And this means that we cannot move freely or work and make money for our families. This month will only aggravate our suffering," Ibrahim said.

The way he sees it, the measures are imposed by the government, which "couldn't care less" about the interests of ordinary people, and this is the reason why Ibrahim says the dissatisfaction with the authorities keeps mounting.

His words are backed by statistics. According to a recent survey conducted by the Palestinian Centre for Policy and Survey Research, nearly 35 percent of the public has been dissatisfied with the measures taken by their government. Only 6 percent evaluated the situation in the Strip as positive.

Many others refuse to speak for fear of persecution by the authorities.

© AP Photo / Khalil Hamra
COVID-19 is Far From Being Gaza's Only Problem, Its Water Quality is a Bigger Threat
However, Hamas is not exclusively to blame for the dire situation in the Strip. An Israeli blockade was imposed in 2007, when the Islamic group Hamas, condemned as a terrorist entity by Israel, established control over the enclave, contributing to Gaza's faltering economy and hurting Gazans' living conditions.

But Ibrahim says it is the responsibility of Hamas to take care of their people. In a way, they are doing it now. Although highly unpopular, the restrictive measures imposed by the government are aimed at bringing the high infection rates down, and the Islamic group is also trying to provide the enclave with vaccines to put an end to the shutting down of Gaza's economy.

The problem is that those vaccines are not coming in. In late February, the Hamas authorities that received 22,000 jabs started to inoculate the population but since then the much-awaited jabs stopped coming in, and the mass vaccination drive has been halted.

However, Ibrahim is not even counting on those vaccines; 35 percent of Gazans hae said they would not be willing to take the jab even when it becomes available.

"We don't believe in them and we don't care about them. They can only protect us for six months. And then what? We will be facing death again. Guess what... we are already doing it now."