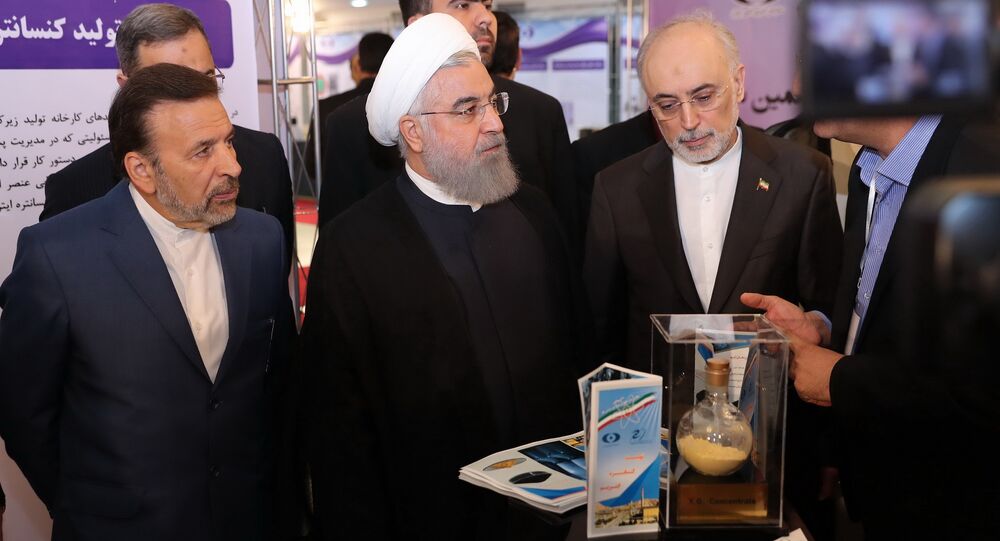 Nuclear power has advantages due to low cost and a lack of greenhouse gas emissions. The use of nuclear power, or the "peaceful atom", is closely watched, as it can be inches away from creating a nuclear weapon. Iran, after undergoing severe pressure while developing its nuclear industry, has repeatedly stressed its commitment to non-proliferation.

Iran plans to announce 133 achievements in the field of peaceful nuclear technology on 10 April, the republic's National Day of Nuclear Technology, according to state-run IRNA.

“Some 133 new achievements in various areas of the nuclear industry, including quantum, enrichment, heavy water, and laser, have been successfully achieved by the AEOI [Atomic Energy Organization of Iran] scientists' efforts over the past year,” the agency announced.

The event is expected to be held in the form of exhibitions, while 11 cases will be presented in a video-conference, with eight in person by Rouhani.

The National Day of Nuclear Technology was established in 2006 to annually celebrate the Islamic republic’s nuclear breakthroughs for peaceful purposes. Ceremonies are usually accompanied by solemn addresses from the republic's leaders.

Last year, the ceremony was postponed due to the coronavirus pandemic, but AEOI spokesperson Behrouz Kamalvandi revealed that the projected 133 achievements included modernized centrifuges and 42 new deuterated compounds, such as radiopharmaceuticals to be used against cancer, along with nuclear propulsion systems for vessels, as well as the use of high- and medium-power lasers.

In 2019, Iran unveiled 83 nuclear achievements in the area of centrifuges, separation and nuclear medicine.

The Iranian nuclear program started in the 1950s, with significant input from the US, the UK and France. Iran joined the International Atomic Energy Agency (IAEA) in 1958. The country in 1968 also signed the Treaty on the Non-Proliferation of Nuclear Weapons. While Iran was developing peaceful atomic energy, a number of countries, including the US, started in the early 2000s to suspect Tehran of developing nuclear weapons.

Amid concerns that Tehran could construct a "full nuclear-weapon cycle," economic sanctions against the Islamic republic, initially imposed by the US after the Islamic revolution of 1979, were expanded as other countries joined.

Difficult negotiations lasted for over a decade. In 2015, Iran and the six countries (Russia, the US, the UK, France, Germany, China) reached an agreement to restrict the Iranian nuclear program in exchange for lifting sanctions - the Joint Comprehensive Plan of Action (JCPOA). Despite IAEA’s reports that Tehran met all requirements of the treaty needed to ease sanctions,the Trump administration in 2018 unilaterally left the JCPOA.

Trump advisers expressed scepticism regarding the conditions and limits that had been put on Iran, while aspiring to limit not only the purported nuclear ambitions of Tehran but also those concerning the country's missile programme. After leaving the deal, the Trump administration imposed harsh economic sanctions on the Islamic republic, waging a so-called 'maximum pressure campaign'.

Since that time Iran has significantly departed from the terms of the nuclear agreement. At the same time, the Islamic republic has stressed that these steps are reversible in the event that the US returns to the fold, stating again that Iran does not seek to construct nuclear weapons.

After a three-year break, on 6 April, negotiations restarted in Vienna regarding a possible JCPOA revival. Iranian representatives, along with other parties of the agreement, participated in talks.