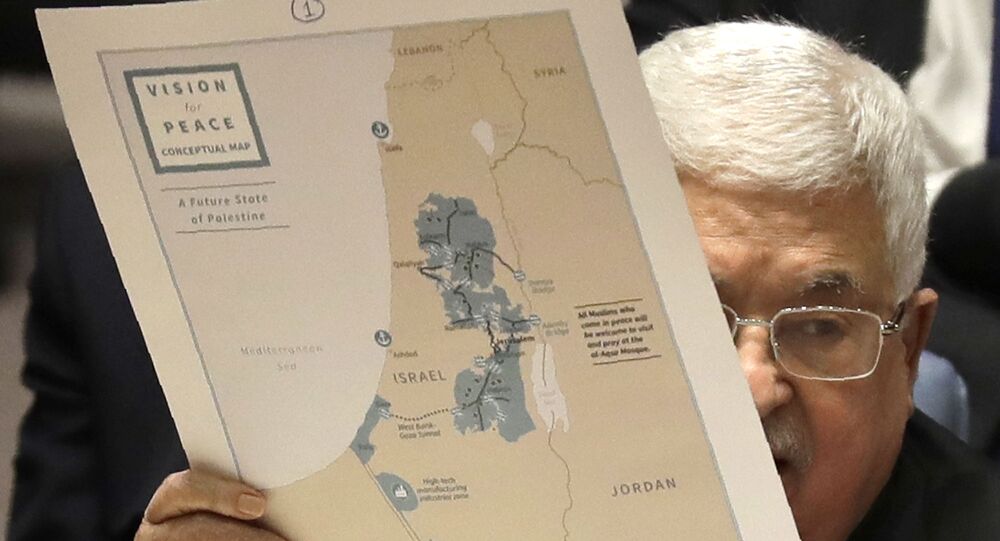 Will Marwan Barghouti Run in the Palestinian Presidential Race, and Should Mahmoud Abbas Be Worried?

A recent poll predicts that the popular Fatah leader, who is currently in jail for his involvement in terror, will get 22 percent of the votes if he ends up participating in presidential elections set for 31 July. If this is the case, the days in office of the current president, Mahmoud Abbas, could be numbered.

On Tuesday, 1 April, Marwan Barghouti, a Fatah leader who is serving five life sentences for his involvement in terror activity against Israel, announced he would set up his own list for legislative elections scheduled for the end of May.

At the top of that list, called Freedom, will be Dr. Nasser Al Qudwa, a nephew of the late President Yasser Arafat, while Barghouti's wife Fadwa will be second.

According to reports, Barghouti himself will not participate in the race, but the mere fact that he will be setting up a separate ticket from Fatah might be a prelude for his presidential aspirations.

Should Abbas be Worried?

Presidential elections in the Palestinian Authority and the Gaza Strip are set to take place on 31 July and Hani Al-Masri, a Ramallah-based political expert and Director General of the Palestinian Centre for Policy Research and Strategic Studies, says Abbas has "every reason to worry".

"It is not only President Abbas who should be concerned. It is Hamas as well, because Palestinians will punish them all in the polls, and this will be shown through the support they will throw behind Barghouti."

Recently, a poll conducted by the Palestinian Centre for Policy and Survey Research found that out of 79 percent of Palestinians who are planning to take part in elections, 22 percent said they would be voting for Barghouti. Such well-known figures as Abbas and Hamas chief Ismail Haniyeh are projected to get 9 and 14 percent, respectively.

Barghouti's popularity is understandable. For many Palestinians he is a fighter, known for his activity against Israel during the First and Second Intifadas. He is believed to be the person who would continue the path of Arafat: a man of integrity who only seeks the benefit of his people, and a person whose reputation has never been marred by corruption allegations or political scandal.

"He gained popularity while spending more than two decades behind bars. Many see him as the heir of Yasser Arafat and as a leader who can secure Palestinian interests and who can help the PA overcome multiple crises."

2020 has been an exceptionally difficult year for the Palestinians. Major donations from the Persian Gulf have stopped pouring in. The US under then-president Donald Trump continued to trim its financial assistance and the European Union turned its back on the PA by cutting off some of its funding.

The coronavirus pandemic has only made the situation worse, and as authorities imposed lockdowns and shut down businesses and public institutions, many found themselves struggling to stay afloat.

The Palestinian leadership in Ramallah, including Abbas himself, was held responsible for the mess.

A survey released in March found that 61 percent of people living in the West Bank was dissatisfied with the measures taken by the government to curb the spread of the disease. Earlier polls have also indicated that the Palestinians were displeased with their politicians, including their president, whose ratings have dropped following his inability to prevent Israel's ongoing settlement activity and its normalisation pacts with five Muslim nations, as well as the decline in the importance of the Palestinian cause for the global community.

This is the reason why Al Masri believes Barghouti's victory is almost certain, if he does end up taking part in the battle for the presidency. If he does, Al Masri, as well as many other Palestinians, expect the Fatah leader to make significant and noticeable changes that will push the Palestinians forward to a brighter future.

"Barghouti will need to implement political and economic reforms. He will need to raise the importance of the Palestinian cause on the local, regional and global levels. And, finally, he will need to claim Palestinian rights and work towards the establishment of our own independent state with a capital in East Jerusalem."