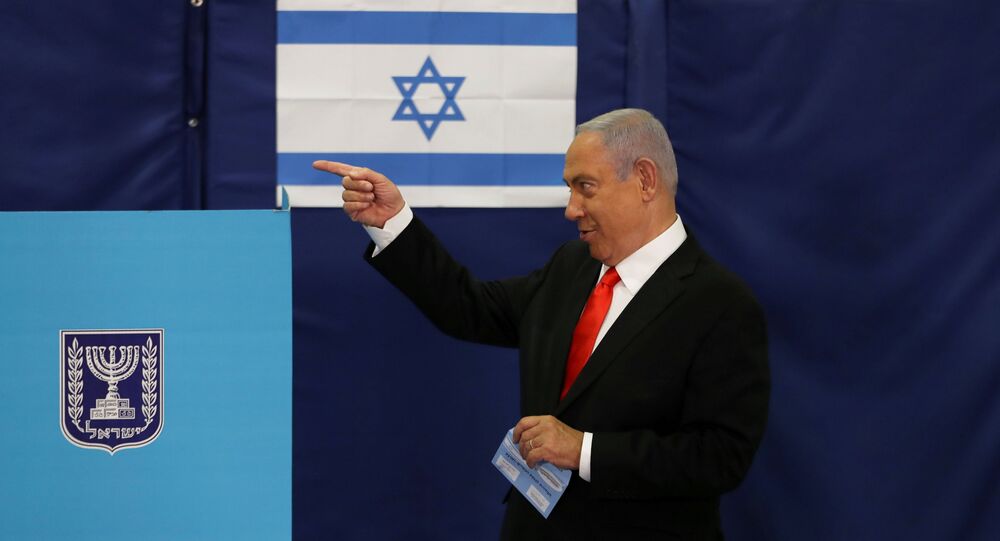 The way it stands now, there are three potential contenders for the role of PM: incumbent Benjamin Netanyahu, Naftali Bennett, and Yair Lapid, but they are struggling to garner the signatures needed to take the top job.

Official results of Israel's parliamentary race are to be handed over to President Reuven Rivlin on Wednesday after which he is expected to start a series of consultations with the heads of all parties. The aim is to determine who will be given the mandate to form a government.

The battle is tight and there are three potential candidates. Who are they and what are their chances? Sputnik breaks it down.

Scenario 1: Benjamin Netanyahu to Remain in His Seat

Israel's Prime Minister heads the largest party in the country, with 30 out of 120 seats at the parliament, the Knesset.

That, however, is far from enough to remain the country's PM. To retain the title, he needs to garner 31 more seats, but that has proven more than once to be a difficult task.

His natural allies, a bloc of three religious parties, received 22 seats in total, which keep Netanyahu only 9 spots away from premiership.

The party of former defence minister Naftali Bennett Yamina received 7 spots in the chamber but it is not yet clear whether he will join forces with the PM to form a coalition.

Although he vowed to do "what's best for the country," and did reiterate that he would not "boycott" the one million voters of Likud, his partnership with Netanyahu is far from being certain, not only because of personal grudges but also because of his own aspirations to become prime minister.

Yet, even if Bennett does end up going with the current PM, Netanyahu still needs two more seats to retain his post. His attempts to find defectors have so far proven to be futile. So did his efforts to sweet talk centrist and conservative parties from the opposing bloc to join his coalition. And this means that the only option for him is to join forces with Raam, an Islamic party that the Likud had incited against before.

© REUTERS / RONEN ZVULUN
Israel’s Kingmaker: Why Mansour Abbas And United Arab List Could Hold Key To Power For Netanyahu
Raam, with its four seats, is playing hard-to-get. During the weekend, its head Dr. Mansour Abbas met with a Likud representative but he also visited the chief of the opposition, Yair Lapid, putting forward his demands that include pouring billions of dollars into the Arab communities and the introduction of a coherent plan that aims at tackling high crime rates among the Arab population.

Abbas is expected to submit the same demands to Netanyahu and although chances are high that they will be accepted, it is unlikely that Bibi's natural allies (i.e. the religious Jewish parties) will be able to sit in the coalition with a party that, according to their belief, supports terror.

Netanyahu will surely try to convince them to give this government a try. Rumour has it that his plan is to glue all religious parties and his own Likud into a coalition, whereas Raam will remain outside of it, and its four members will not be given ministerial jobs. Instead, they will be given lots of money in exchange for recommending Netanyahu to the President.

The leader of the opposition Yair Lapid ended up getting 17 seats in the parliament, which makes his Yesh Atid Israel's second-largest party.

Just as it is the case with Netanyahu, he will also need to rely on a number of natural allies to make sure the current PM is replaced.

Ideologically speaking, Lapid is a centrist party. Radical left and right wing ideas are not supported by him but he is also adamant about ousting Netanyahu from office and in order to be able to do so, he is prepared to join forces with those he would never thought of including before.

The hawkish Likud defector, Gideon Saar, and former defence minister Avigdor Lieberman would not be Lapid's natural choices. But they are now being eyed as potential partners in ousting Netanyahu.

© CC BY 2.0 / James Emery
Israeli President Rivlin to Begin Consultations With Parties Elected to Knesset on 5 April
There are other obstacles, too. First, there are past grudges between Lapid and his former ally Benny Gantz, who broke up their partnership last March, splitting their Blue and White List.

The two met on Sunday after a year of no contact at all, but, according to reports, Lapid failed to convince his former colleague to recommend his name to the President.

And second, even if Lapid does end up convincing the conservative parties to recommend him for the role of PM, the chances are slim that the liberal bloc that includes Labour and Meretz with 7 and 6 seats each will give their blessing to such a move.

The same holds true for the Joint Arab List and Raam, both of which are likely to reject a government where Saar and Lieberman play a pivotal role.

Scenario 3: Bennett As an Alternative

The current stalemate could be an opportunity for Naftali Bennett, who garnered 7 seats. Israeli experts believe that his plan is simple. First, he would forge an alliance with Lapid, Saar, and Gantz, securing 38 seats in the parliament. Then he will ask the three religious parties that are currently in Netanyahu's bloc to join forces.

How likely is it that such a scenario plays out? Its chances are low, and not only because Lapid, head of the second-largest party, will not want to give up on the role of PM; also because the three religious parties have already stated that they are committed to Netanyahu and are not planning to budge.

And if this is the case, a stalemate in Israel promises to continue and a fifth-round parliamentary race doesn't seem improbably anymore.