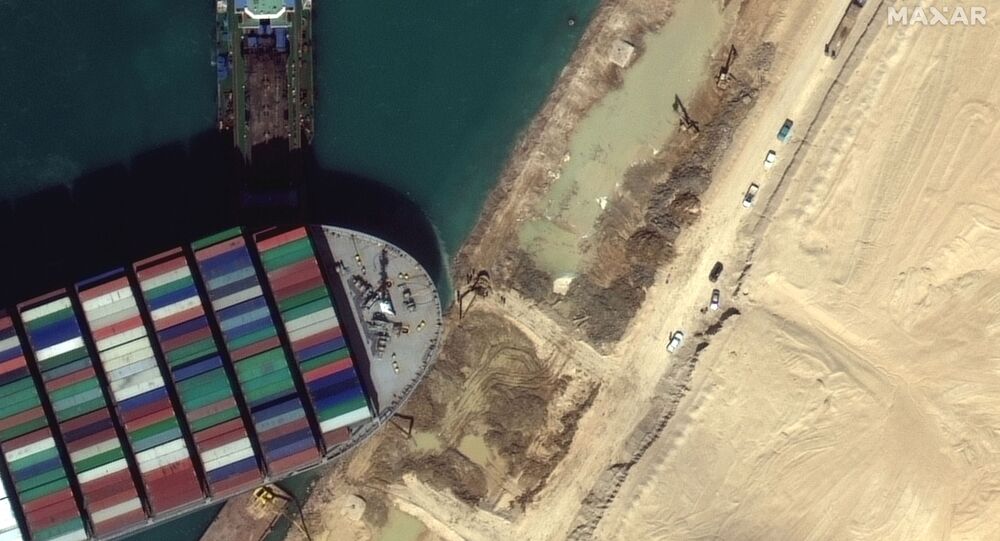 It's hoped that the Ever Given, currently stuck in the Suez Canal and causing a massive backlog of ships, will be refloated this weekend. But those who recall the canal’s difficult history know that the current bottleneck nightmare is nothing compared to an eight-year maritime traffic jam for example.

The Ever Given cargo ship operated by Taiwan’s Evergeen Marine company has been blocking the Suez Canal since Tuesday after heavy winds wedged the vessel diagonally across the waterway.

Nearly 200 ships are now sitting idle on both sides of the artificial waterway waiting to deliver their precious cargo from Europe to Asia and vice versa.

But the crisis has been relatively low-key compared to past fiascos, despite economists estimating that the traffic jam is costing global trade some $400 million per hour. Let's look back at some of the canal's bigger disasters.

1956: The thoroughfare, which was built to shorten shipping routes and completed in 1869, was the subject of conflict when Israel, the UK, and France invaded Egypt in 1956 in what became known as the Suez Crisis. It was prompted by the Western powers’ attempt to regain control of the canal after it was nationalised by Egyptian president Gamal Abdel Nasser. It was closed from October 1956 to March 1957, while Egypt retained control of the waterway to this day.

© REUTERS / AMR ABDALLAH DALSH
People take a selfie on a beach in Suez near the Suez Canal, Egypt March 24, 2021

1967: Hostilities between Israel and Egypt continued to surge as Tel Aviv launched a series of preemptive airstrikes against Cairo on 5 June 1967, resulting in the Six-Day War. Egypt then closed both sides of the canal to prevent it being used by the Israelis. Fifteen international ships, which went down in history as the Yellow Fleet, had already entered the canal before the war started and had no choice but to stay put.

1973: Six years later, another conflict known as the Yom Kippur War broke out between a coalition of Arab states and Israel, when Egypt and Syria launched a surprise attack on the country. Egyptians and Israelis used the Suez Canal to cross into enemy territory, filling the waterway with debris and munition. The final ceasefire was reached 19 days into the war and offered hope that the canal would soon reopen.

© REUTERS / ROSCOSMOS
A satellite image shows the Suez Canal blocked by the stranded container ship Ever Given in Egypt March 25, 2021, in this image obtained from Twitter page of Director General of Roscosmos Dmitry Rogozin. Picture taken March 25, 2021

1974-1975: However, it remained blocked until the end of 1974 when a clearance operation was conducted to clean it from wrecks, naval mines, and unexploded remnants of war. In 1975 the blockade was lifted and the Yellow Fleet was able to leave the canal – the ships were stuck for eight years, making it the longest traffic jam in history.

The closure, which prompted some nations to divert their shipping paths around Africa, doubling the distances, sent shockwaves around the world. Trading costs for countries sending cargos from Europe to Asia soared in 1967 and slashed commerce by over 20 percent for some trading partners. Things returned to normal in 1975 when the canal was reopened.

2021: The Ever Given blockage is costing the world economy billions of dollars, sending oil soaring, and causing turmoil in the markets as crude shipments are delayed. The vessel’s owner company Shoei Kisen KK estimates that it should be refloated in the next few hours but as of Saturday afternoon, the Ever Given is still stuck, prompting ship owners to consider a much longer and costly detour option around Africa, bringing back memories of the 1967 crisis.