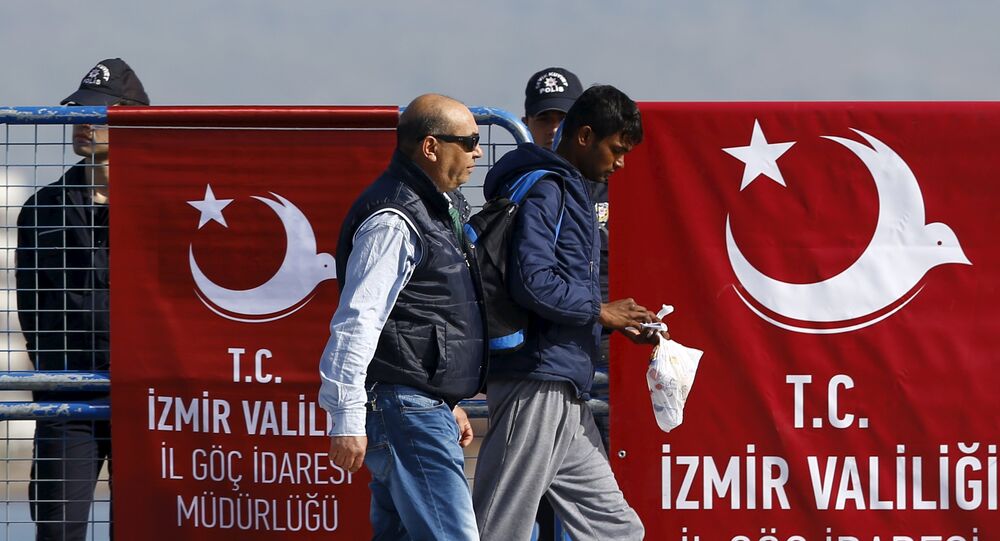 EU-Turkey Migrant Deal: Will Turkey Continue to be a 'Waiting Room' for Refugees?

On 25-26 March, Brussels is due to hold a summit with member states focusing, in particular, on the renewal of the 2016 EU-Turkey migration agreement. The upcoming summit will make it clear whether the EU is ready to fulfill its part of the deal this time, says Dr. Can Ünver, chairman of the UN Committee on Migrant Workers (CMW).

On 18 March, Turkey marked the fifth anniversary of the signing of the 2016 migration agreement with the EU. During this time, the number of undocumented immigrants entering the bloc's territory has reportedly been significantly reduced. However, while the EU pledged to allocate €6 billion in a refugee support package, it has fallen short of fulfilling that promise, providing just €3.6 billion, according to Ankara. According to EU figures, however, the bloc directly handed over €4.1 billion to Turkey, while the remaining €2 billion were allocated through different projects.

Where is the Money?

The EU-Turkey migration agreement was originally about providing Ankara with two tranches of cash, €3 billion each, says Dr. Can Ünver, chairman of the UN Committee on Migrant Workers (CMW). If even one tenth of the total number of all refugees staying in Turkey ended up in Europe, the EU would have to spend at least €40-50 billion, according to him.

"Of course, the EU does not intend to transfer such an amount of money to Turkey," Ünver says. Moreover, the manner in which assistance is provided is also questionable. The EU insists on the transfer of funds through non-governmental organisations, and these are mainly European structures. This is tantamount to transferring money from one pocket to another."

Brussels also did not deliver visa liberalization for Turkish citizens, according to the official. He points out that any acceleration of the process of Turkey's bid to join the EU, updating the customs union agreement and the introduction of a visa-free regime for Turks were also part of the deal. European countries were guided by the desire to persuade Ankara to keep refugees on its own territory, preventing them from moving north to Europe, at any cost, according to Ünver.

"In general, Turkey was viewed by the West as a kind of a 'waiting room' for refugees. Of course, this is not an acceptable approach," he suggests. "Rather than acting together to resolve the problem, the West followed the path of imposing its terms on Turkey."

As of 24 February, 2021, there were 3,656,525 Syrian refugees sheltering in Turkey, and almost half are under the age of 18. In addition to Syrian citizens, Turkey also has a significant number of migrants from other countries - Iraq, Afghanistan, various African states, etc. According to the deputy head of the Turkish Migration Department, Gökçe Ok, an estimated 5.5 million people from 196 countries are currently being hosted by Turkey.

What's making matters worse, according to the Ankaran bureaucrat, is "incredible hostility" demonstrated by the EU toward the Turkish president, Reccip Erdogan, calling it the main cause of a crisis of confidence between Brussels and Ankara.

"Recently, however, there has been a certain tendency [in the EU] to soften its rhetoric [towards Turkey]," Ünver avows. "At the upcoming summit it will become clear where this process will lead. One thing is clear: sanctions won't work to force Turkey to make concessions. In this regard, sanctions are a completely ineffective method."

For his part, the head of the EU diplomacy, Josep Borrell, also signalled that Brussels should renew its immigration agreement with Ankara – since the previous one has expired, – stressing that refugees hosted by Turkey "continue to need [EU] support." This issue is due to be discussed during the 25-26 March summit in Brussels.

A revised Turkey-EU migration deal together with the main provisions contained therein would go a long way towards addressing the refugee problem and revitalising Turkey-EU relations with a positive agenda. This requires vision and leadership.https://t.co/yUXTgaj6ww

​Ahead of the conference, Ibrahim Kalin, a spokesperson and chief advisor to Erdogan, expressed his hope that "an updated migration deal can revitalise Turkey-EU relations," in an op-ed for the ECFR Council. Alongside the wish for additional cash for Turkey's migrant programme, Kalin noted other important issues previously negotiated by Ankara and Brussels.

"The statement already has a roadmap with the specific goals of strengthening Turkey’s accession process, starting the process of updating the customs union, revitalising high level dialogue and summits between Turkey and the EU, encouraging visa liberalization for Turkish citizens, better cooperation in the management of irregular migration and the protection of asylum-seekers, and the fight against terrorism. None of these goals is beyond reach," Erdogan's chief adviser offered.