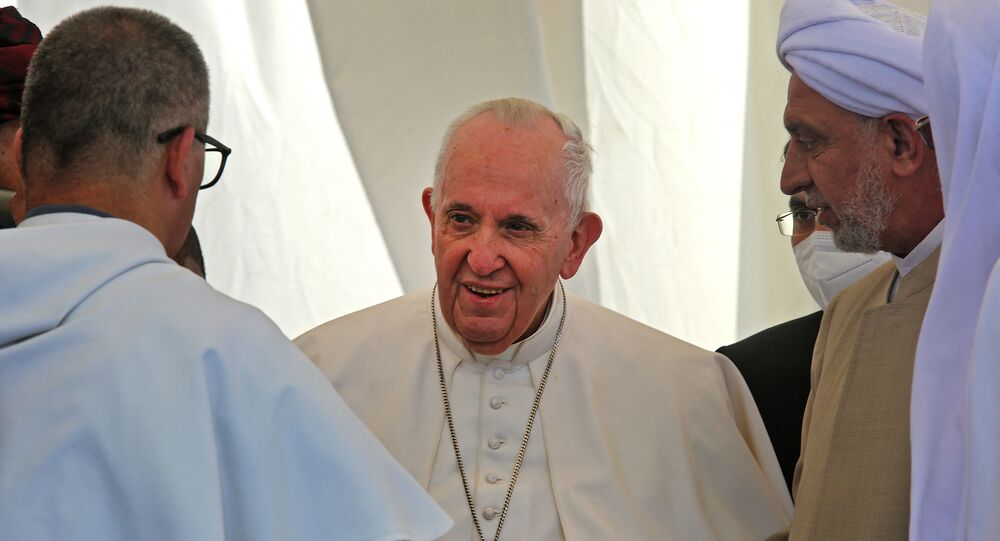 Pope Francis has become the first head of the Roman Catholic Church to visit Iraq. The pontiff described this historic three-day trip as “a duty to a land martyred for many years.”

Watch a live broadcast from Baghdad's Chaldean Cathedral of Saint Joseph where the Pope is holding a mass on Saturday, 6 March.

On Friday, Pope Francis met with Shia Grand Ayatollah Sayyid Ali Al-Husaymi Al-Sistani in Najaf, visited the ancient city of Ur, the biblical birthplace of patriarch Abraham, as well as the Nineveh Plain, whose residents witnessed atrocities committed by Daesh* terrorists.

The pontiff's visit to Iraq comes as part of the initiative to preserve the country's ancient Christian communities and support the return of those Christians who were driven out by Daesh. On the third day of his visit, the Pope is expected to visit Mosul, where he will pray in Hosh al-Bieaa for the comfort of the souls of war victims. After that, he will visit the Church of the Immaculate Conception In Qaraqosh where he will recite the Angelus Prayers with believers. Finally, he will return to Erbil, where he will celebrate the Holy Mass at Franso Hariri stadium.

*Daesh (IS/ISIS/ISIL) is a terrorist organisation banned in Russia and many other countries.