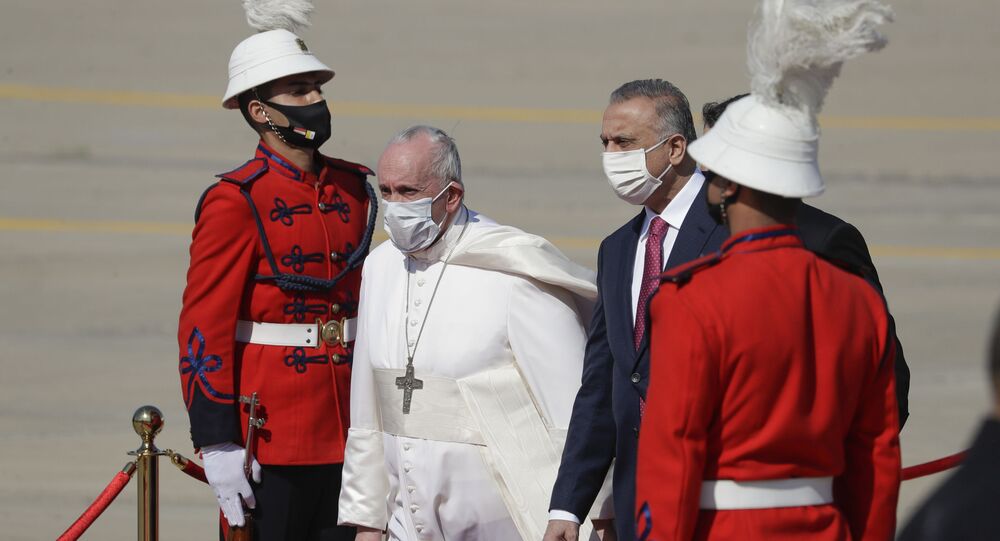 Iranian Gen. Qassem Soleimani, who served as the commander of Iran’s elite Quds Force, was assassinated in an early January drone strike ordered by former US President Donald Trump. The one-time commander-in-chief claimed the “defensive” strike was conducted in part because the Iranian official was plotting “imminent” attacks against US forces.

A senior Iranian official remarked on Friday that Pope Francis’ trip to Iraq would not have been adequately safe had it not been for the anti-terror operations previously ordered by Soleimani and Iraqi commander Abu Mahdi Muhandis.

Hossein Amir-Abdollahian, who acts as the special adviser to the speaker of the Iranian Parliament, stated in a tweet that if it wasn’t for Soleimami, Muhandis and “the martyrs of the fight against terrorism and Daesh in Iraq and the region, the Pope would not have been able to enter Iraq today in safety and peace.”

Soleimani and Muhandis, who was previously the deputy head of Iraq’s Popular Mobilization Units, were both killed in the January drone strikes that were carried out near Iraq’s Baghdad International Airport. A few days later, retaliatory strikes were conducted against the Ain al-Asad air base in western Iraq, which left dozens of US service members suffering from traumatic brain injuries, though none died from the injuries.

The January strikes were largely seen as a boiling point between Iran and the US amid Washington’s so-called “maximum pressure” campaign against the Middle Eastern country.

The campaign came about after Trump decided to withdraw the US from the 2015 Joint Comprehensive Plan of Action, a move that effectively reimposed a series of harsh sanctions on Iran, on top of a slew of designations and additional sanctions that followed.

Amir-Abdollahian’s single Friday tweet also saw the adviser blast Washington’s Middle East policies, saying that the US’ meddling practices have only continued to serve as “source of instability” in the region.

Pope Francis’ trip proved to be the first time that the head of the Roman Catholic Church has ever visited Iraq, as well as being the first trip the pontiff has made since the onset of the COVID-19 pandemic.

© REUTERS / Teba Sadiq
A mural of Pope Franci is seen on the wall of a church upon his upcoming visit to Iraq, in Baghdad.

Shortly after arriving in Baghdad, Francis told Iraqi authorities in an address that in order to provide a “better, more just and more humane world” for future generations, individuals need to “learn to look beyond our differences and see each other as members of the same human family.”

Pope Francis also took the opportunity to talk on terrorism and fundamentalism, saying that both have “brought in its wake death, destruction and ruin.” Touching on the brutal targeting of the Yazidi ethic minority by Daesh militants, he added that “the damage is so much deeper if we think of the heartbreak endured by so many individuals and communities.”

The four-day trip will see the pope visit with the Grand Ayatollah Ali al-Sistani, the leader of Iraq’s Shiite Muslims, and travel to the north of the country to lead prayers in areas that were retaken from Daesh militants.