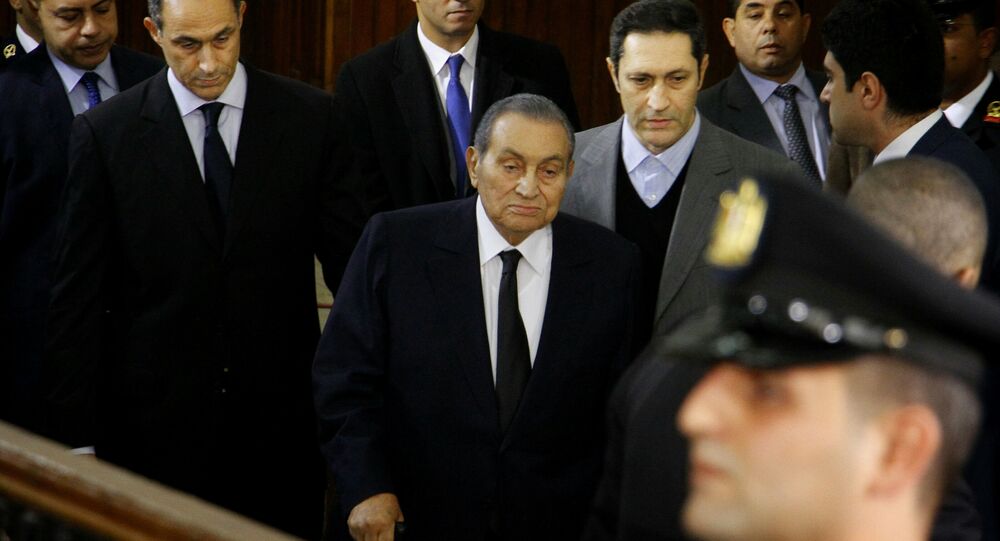 As Egypt Marks 1st Anniversary of Hosni Mubarak's Death, Ex-Diplomat Says His Legacy Will Live On

Mubarak will always be remembered for the efforts he exerted in the modernisation of Egypt, for the infrastructure he built and for the stability he ensured. But his 30-year rule was too long for Egyptians to swallow, especially as it was marked with corruption, shady deals and the uneven distribution of resources.

Thursday marks the first anniversary since the passing away of former Egyptian President Hosni Mubarak.

A year ago, the body of the 91-year old former leader was transported from a mosque on the outskirts of Cairo to the family cemetery and from there it was pulled by horse-drawn carriages alongside a procession led by his two sons and the current Egyptian President Abdul Fattah A-Sisi.

In his last journey, Mubarak received full military honours. Even now, a year after his death, many Egyptians speak of their former president with respect, enumerating the various things he has done for the country.

Hussein Hareedy, a former Egyptian diplomat who has known Mubarak for 30 years and who had accompanied the ex-president on a number or foreign trips, says the legacy of Mubarak can hardly be underestimated.

In 1973, during the October War, when Egyptian and Syrian forces attacked Israel in a bid to reconquer territory that had been captured by the Jewish state in 1967, Mubarak served as the commanding officer of Egypt's air force and played a pivotal role in his military's achievements.

But that was only one of his big achievements. Soon after, then-president Anwar A-Sadat was assassinated in Cairo in 1981 and Mubarak took over his presidency. He went on to implement a number of huge reforms that would transform Egypt.

Even though emergency laws have been kept intact, in the first years of his reign, Mubarak freed more than 1,500 political prisoners and lifted many restrictions on the freedom of speech.

Egypt's economy has also been given a serious face-lift.

"Before he came to power, Egypt didn't have a reliable phone system. Nor did we have Cairo's underground or any of the services we enjoy right now."

Mubarak, whom Hareedy calls "the patriot of Egypt", vowed to change that. Under him, the Arab country has witnessed the construction of multiple roads and bridges. His government established sewage facilities, schools and telephone circuits. It solved the problem of bread subsidies.

To achieve many of his economic goals, he relied on the International Monetary Fund for assistance. He turned Egypt into a tourist destination and created millions of jobs that improved the country's standing.

"He cared greatly about job creation and the economic development of his country. In the 30 years of his rule, Mubarak managed to develop Egypt and provide Egyptians with food security and stability," claims the former diplomat.

However, those achievements were not enough to keep people satisfied.

The growing disparity in income coupled with unequal access to resources strained relations between the poor and the rich and eroded the unity between the Muslims and Copts, a Christian minority that makes up some 10 percent of the country's population.

Unemployment rates went up, and so did the number of poor people. In 2008, for example, 20 percent of the total population was poor. Nearly 15 percent of Egyptian children didn't attend school.

However, these were only several of Egypt's woes. "One of the main problems was that Mubarak had been in power for too long. Another problem was that in the second part of his rule, his family started interfering in political affairs to the extend that people started to believe that his son Gamal would succeed him as the country's president."

That, coupled with Egypt's economic woes, the corruption and the violation of basic rights, eventually paved the way for the events of the Arab Spring in 2011 that culminated with the ouster of Mubarak from power.

Looking back at those events, Hareedy says Mubarak didn't deserve that fate of being ousted, tried and jailed and believes he should have been treated more humanely.

"My belief was that we should have allowed him to stay as president. We should have let him hold elections with a number of candidates and whoever won that battle would replace Mubarak, but that didn't happen."

Mubarak left power peacefully after he realised that the support he enjoyed from in the past and that emanated from the military, the police and his own party has started to evaporate.

So did the support of his American allies, who called on him to step aside and relinquish power.

As soon as Mubarak budged and was out of the way, the Muslim Brotherhood movement, now deemed a terrorist group by Egypt, took control over the situation, swiftly promoting its candidate Mohamed Morsi for the presidency; he eventually took office in 2012.

What followed afterwards was mayhem and Hareedy says Mubarak knew Egypt would be taking that route as soon as he left office.

"Mubarak was right. He knew what was going on in the region and knew that the Muslim Brothers would hijack the revolution but he didn't have a choice but to leave."

Now, a year after his death, Hareedy looks at Mubarak's era with nostalgia, and even though he does admit his decisions have not always been correct, he nevertheless says the former leader was "a great soldier, a great person and a great man" who kept Egypt away from wars, who fought terror and who modernised the country.