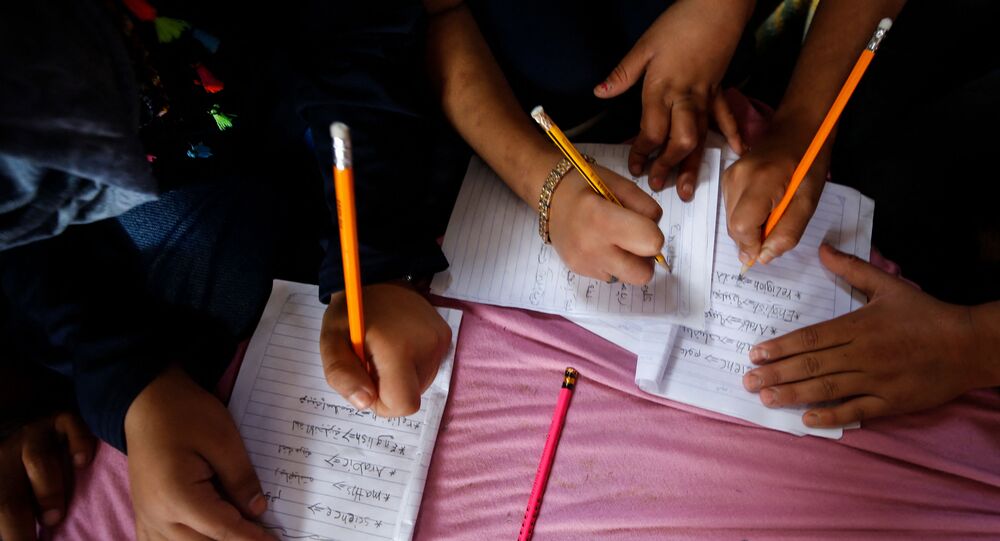 The Strip's education system had many holes even before the outbreak of COVID-19 in March 2020. Students lacked basic equipment and were forced to study in shifts, but the principal of a local school says the situation has only deteriorated since the first cases of coronavirus were discovered.

Moataz Nafea, the principal of the Sultan prep school in Gaza, looks at the situation in his educational institution with concern and says many of its 5,000 students have stopped attending classes.

The reason for this was the outbreak of the coronavirus last March and subsequent decision by the Hamas government to curb it by implementing a series of strict measures that included a ban on public gatherings and the shutting down of private businesses and public institutions, including schools and colleges.

"The pandemic has destroyed the schooling system of the Gaza Strip. Most of our students left their desks and many couldn't care less about the digital education we are offering".

© AFP 2021 / MOHAMMED ABED
Palestinian workers wearing protective face masks sanitise a classroom in a United Nations-run school before a new academic year starts, amid concerns about the spread of the COVID-19, in Gaza City in Gaza City on August 5, 2020.

The problem is that even if they did care about e-education, that option would still be out of reach for many Gazans, almost half of whom live in extreme poverty, below the mark of $5.5 a day.

In a place where 62 percent of households are severely or moderately food insecure, providing children with computers or smartphones is something that not many can afford.

But Nafea says the situation wasn't much better before the pandemic, and he, along with principals of other local schools, have faced a number of severe challenges that prevented the system from functioning.

In 2017, for example, a UNICEF report concluded that more than half a million children studied in crowded classrooms. Two-thirds of local schools were forced to operate in double shifts to accommodate the growing number of students.

Yet, these were far from being the Strip's only problems and the same report found that the Palestinian enclave's schools lacked teachers, basic equipment, and facilities, including electricity, forcing children to study by candlelight.

"Out of all problems our schooling system was facing [before the outbreak of the pandemic], I feel that our biggest challenge was the lack of modern tools and the fact that many kids skipped school because of their tough economic conditions and because they were forced to help their parents to make a living", the principal laments.

According to official statistics, in 2018 two percent of Gaza's children aged 10 to 17 were involved in full-time labour. Nafea says that in the past the entire system was focused on stopping the spread of that phenomenon by educating parents about the importance of sending their offspring to school.

Now, however, with the pandemic still raging and with the problem becoming more acute, Nafea says it will be tougher to encourage parents to send their children to study, rather than send them off to pick up some odd jobs.

And it will also be challenging to encourage students and parents alike to stick to the current digital education.

"The Ministry of Education is currently working on a strategic plan that aims at presenting a number of new methods that will enable us to teach kids in the era of the pandemic. But it will take years until we restore our ability to teach students properly, like we did it before".

Nafea is certain that life won't return to normal soon. Since the outbreak of the pandemic last March, the Gaza Strip has registered more than 53,000 coronavirus cases. Over 3,000 patients are still being treated in hospitals across the area, with the densely populated enclave continuing to register dozens of new cases per day.

"We are all afraid of yet another lockdown", confesses the principal, "because it will stop all aspects of life in Gaza. But this disease won't vanish that quickly and this is why we need to adapt, keep developing our online education system, and give children the necessary tools to cope with this crisis".