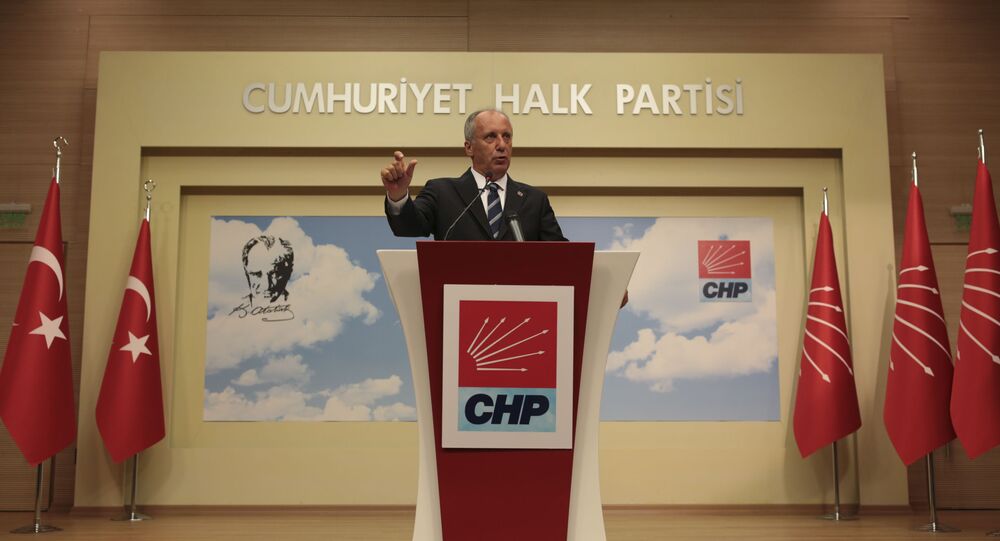 ANKARA (Sputnik) - Prominent Turkish opposition candidate Muharrem Ince, who challenged Recep Tayyip Erdogan for the presidency, has formally left his longtime party, the Republican People’s Party (CHP), and formed a new one by the name of Memleket.

Ince, who garnered a sizable 30 percent of the vote against Erdogan’s 52 percent in the 2018 campaign, said he was parting ways with his longtime party due to its complacency.

"I am parting ways with fake CHP members. The current opposition cannot challenge the authorities, it has grown together with them and is very pleased with this. They divide the people into two parts, like a watermelon. My path is at odds with those who are begging for democracy from the United States," Ince said at a news conference in Ankara.

He went on to vow that his new party will never align itself with the ruling coalition led by Erdogan’s AKP.

Ince reiterated his loyalty to the path of modern Turkey’s founder Mustafa Kemal Ataturk and claimed that his legacy of republicanism, secularism and nationalism are being eroded by the current leadership. He blamed the CHP of maintaining little more than a banner in support of these principles.

Ince dismissed claims that he was dividing the opposition, saying that he was giving a real opposition option to voters who cast ballots for CHP out of a lack of choice.

He went on to hit out at Erdogan for mismanaging his domestic policy and using the opposition and foreign powers as scapegoats for his own shortcomings.