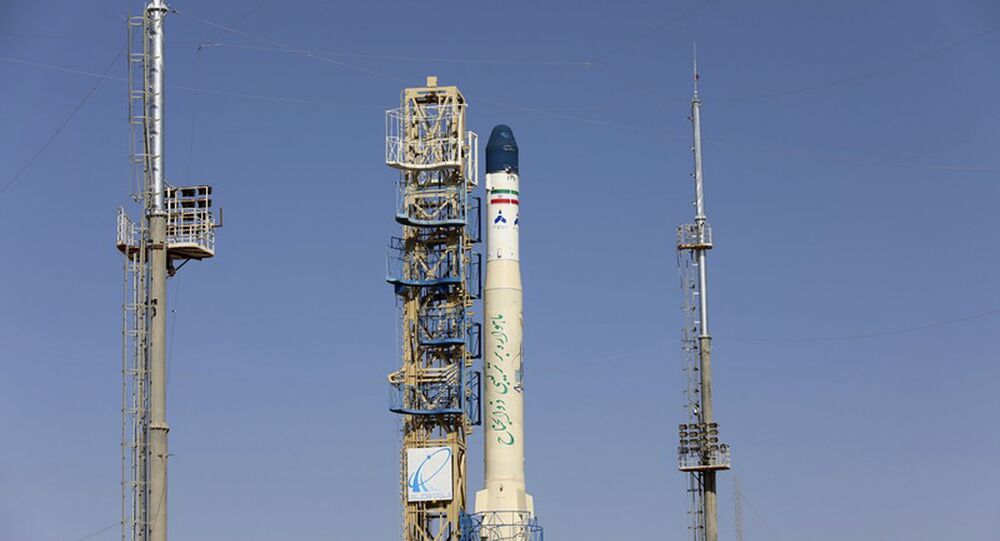 Tensions between the US and Iran have been especially high ever since Trump in 2018 withdrew from the 2015 Iran nuclear deal, also known as the Joint Comprehensive Plan of Action (JCPOA), and reinstated harsh sanctions against Iran. The JCPOA stipulated that Iran would receive waivers from sanctions if it agreed to limit its nuclear programme.

Iran on Monday shared a video of its new domestically-made satellite launch vehicle in action. It is the first Iranian-made carrier rocket powered by a solid-fuel engine, which makes it the country's most powerful.

In a solid rocket, the "fuel and oxidizer are mixed together into a solid propellant which is packed into a solid cylinder," according to a blog post by NASA.

The launch was aired on Iranian state TV on Monday. The rocket, named Zol Janah, is believed to reach a height of 310 miles, according to the Associated Press. In addition, the satellite carrier is 25.5 meters long and weighs 52 tons. The rocket did not launch a satellite into orbit.

According to Ahmad Hosseini, spokesperson for the country's Defense Ministry's space department, the rocket is capable of launching a single 220-kilogram satellite or up to 10 smaller ones, to the altitude of 500 kilometers [310 miles]. The ministry specified that the launch was experimental.

Iran frequently tests its new military projects around national holidays. The country is expected to celebrate the 42nd anniversary of the Islamic Revolution later this month.

Tensions between the US and Iran continue to be high.

In a Monday interview with NBC News, US Secretary of State Antony Blinken stated that Iran was months away from developing a nuclear bomb, noting that the administration of US President Joe Biden will return to the Iran nuclear deal as long as Tehran returns to compliance, Al-Jazeera reported.

In addition, Blinken revealed that the US plans to negotiate a "longer and stronger" nuclear accord with the Middle Eastern country.

However, Iran has said that it would not renegotiate the deal.

“The nuclear accord is a multilateral international agreement ratified by UN Security Council Resolution 2231, which is non-negotiable and parties to it are clear and unchangeable,” Iranian Foreign Ministry spokesman Saeed Khatibzadeh told state media Saturday, Al-Jazeera reported.