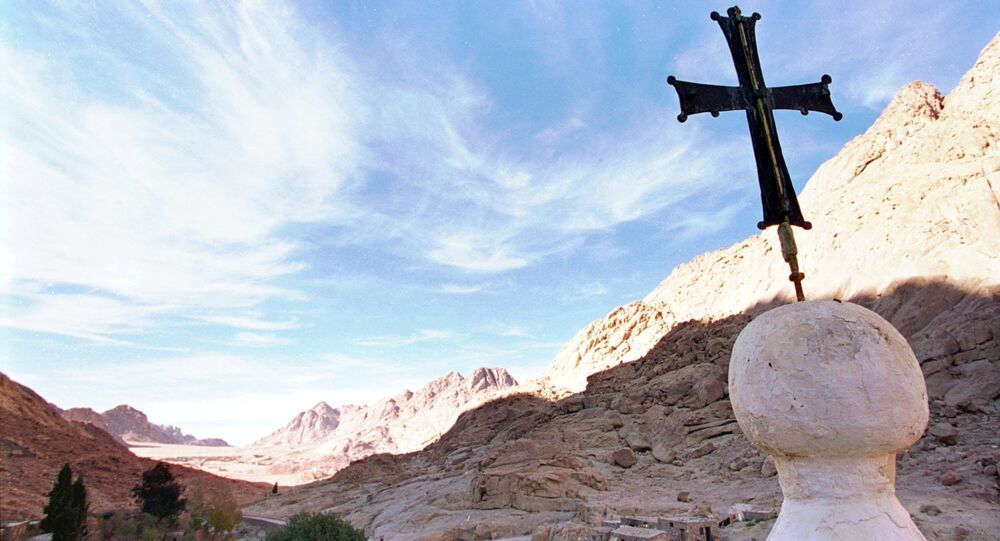 The Tabernacle, according to the Hebrew Bible, refers to the portable earthly ‘dwelling place’ of the God of Israel, which Moses was instructed at Mount Sinai to construct and transport for the Israelites’ journey to the Promised Land, and which was subsequently destroyed by the Philistines.

Clues potentially able to help unravel the mystery of the location of the Tabernacle – the earthly dwelling-place of the God of Israel – can be found in the Holy Land and the Bible itself, according to a professor of Bible studies.

Tom Meyer, who works at Shasta Bible College and Graduate School in California, was cited by The Express as saying archaeologists have uncovered evidence of the Tabernacle in the ancient city of Shiloh -in the modern-day West Bank.

Ancient Shiloh in Samaria. Capital of Israel for 369 years. Dating back to 14th century BC. 2000 yrs. before Islam. pic.twitter.com/Tx1bF8HIPz

Also referred to as the Tent of Congregation, according to the Bible, the Tabernacle was a portable sanctuary carried by the Israelites as they headed to the Promised Land.

The word itself stems from the Hebrew root of "to dwell", as the Tabernacle was believed to be a home for God on Earth. It was also believed to be a precursor to the Holy Temple of Jerusalem.

According to Exodus 25, God instructed Moses to guide the construction of the Tabernacle, with its innermost sanctum designed to house the Ark of the Covenant, a gold-covered wooden chest described as containing the two stone tablets of the Ten Commandments.

There are passages in the Bible that depict a veil supported by four posts stretching over the inner sanctum, known as the Holy of Holies, which was surrounded by an outer courtyard and wall.

The menorah, a golden lampstand, table and a golden altar of incense, stood inside the Tabernacle, which is believed to have been destroyed by the Philistines in 1050 BC, approximately around the same time that they briefly captured the Ark of the Covenant from the Israelites.

The Ark, however, was reclaimed by the Israelites, and brought to Jerusalem by King David around 1000 B.C. It disappeared when the city was destroyed by the Babylonians in 587 BC, spawning multiple theories about its subsequent fate.

However, archaeological evidence has reportedly come to light to reveal the possible location of the Tabernacle – and it is where the Bible suggested it was, says Professor Meyer. They may be subtle, but the clues "fit together perfectly" like pieces of a jigsaw puzzle.

"A series of archaeological clues have come to light that can help us identify the exact spot where the God of Israel tabernacle... The city of Shiloh, located in the heart of the Biblical hill country, became the first capital of Israel shortly after the conquest of Canaan around 1400 BC. It was here that Israel pitched the Tabernacle and here the Ark of the Covenant dwelt before it was put into the Temple in Jerusalem at the time of Solomon," the expert is quoted as saying.

As it was a mobile construction rather like a large tent, Professor Meyer argued it would be pointless to search for foundations in Shiloh.

Just finished a week of digging with ABR (@DigTheBible) in Shiloh. Truly a great experience discovering biblical evidence and meeting a lot of great people. Great learning experience as I knew nothing about archeology before this trip. What a beautiful land pic.twitter.com/HbY0A0cGx3

​Instead, archaeologists have found supporting evidence and clues, such as a rectangular area in the bedrock on the northern side near the summit of Shiloh, known as 'Tabernacle Plateau'.

​"This area is sufficiently large enough to house the 150’x75’ Tabernacle courtyard. Archaeologists found small cavities hewn into the bedrock of the plateau at intervals; these were perhaps postholes used to support the wooden poles of the outer Tabernacle fence,” said the professor.

He went on to say that during excavation work in 2017 archaeologists found three stone horns that once decorated three of the four corners of the altar in the Tabernacle courtyard.

Ten Ancient Jugs And Shiloh May Reveal The Location Of The Biblical Tabernaclehttps://t.co/FF5gCtMFCw pic.twitter.com/L0zrOhIKVi

A trove of animal bones was also dug up, dated approximately to the time of the Tabernacle, which might be remains of animals sacrificed and eaten by the priests.

"Most of the bones come from the right side of the animal which the Bible designates as the priest’s portion of the sacrificed animal. These archaeological clues fit together perfectly like pieces of a jigsaw puzzle, giving us confidence that we can pinpoint the exact spot where the God of Israel tabernacled among his people in the formative stages of Israel becoming a nation, some 3,400 years ago," said Tom Meyer.

Shiloh is situated about 20 miles north of Jerusalem and is currently an archaeological park, home to a number of discoveries, ranging from Byzantine-era churches and a Canaanite Wall to a Mosque.

'This Is Not Mythology': Archaeologists Dig Up Proof in Israel That May Corroborate Bible Texts