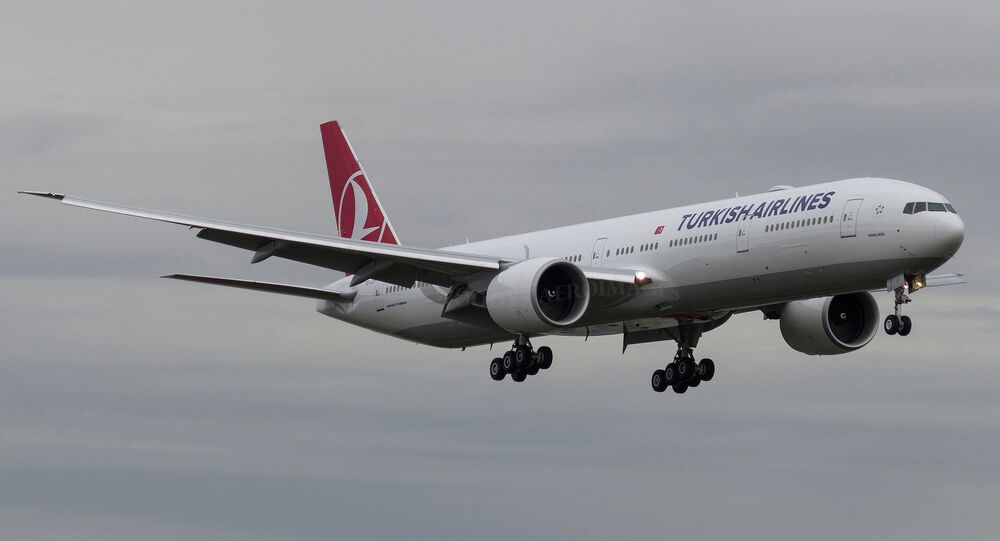 On Friday, reports emerged that planes were turning away from the King Khalid International Airport in Riyadh, Saudi Arabia, with reasons remaining unclear. Later, it was revealed that planes could again land in Riyadh.

A Turkish Airlines flight from Istanbul to Tehran appeared to divert to Baku on Friday, as reports emerged that air raid sirens could be heard in the Iranian capital city.

According to Flightradar 24 data, the plane successfully landed in Baku's Heydar Aliev Airport after having made several circles in the sky above Tehran.

The Khomeini airport in Tehran stated that the plane had been diverted due to weather conditions, according to Fars news agency. Tasnim news agency described the weather in the Iranian capital as cold, rainy and foggy.

© Photo : Flightradar 24
Screenshot from Flightradar 24 showing the route of the Turkish Airlines flight from Istanbul to Tehran that ended up in Baku, Azerbaijan

Tehran's deputy governor for security, Hamidreza Goodarzi, told Mehr News that the air sirens were not connected with flights in Tehran airport, while adding that the sound was due to system testing.

"This sound was due to the activation of the sound system of one of the organizations around the town", he told Mehr. "Now this system is disabled and there is no need to worry."

According to the reports, there were some electricity outages in the Iranian capital.

On Friday, social media users shared videos online, in which supposed air raid sirens could be heard in some parts of the Iranian capital.

The sirens could reportedly be heard in areas named Shahr Ara and Marzdaran.

#BREAKING The siren heard in Western Tehran was not related to any security problem, and was just caused by the alarm system of a center in Azmayesh Town, Deputy Governor General Tehran for Security Affairs said. pic.twitter.com/RaXYk1QOV6

​​Earlier in the day, social media users noted that planes were diverting from Riyadh for an unknown reason, but air traffic was later normalised.