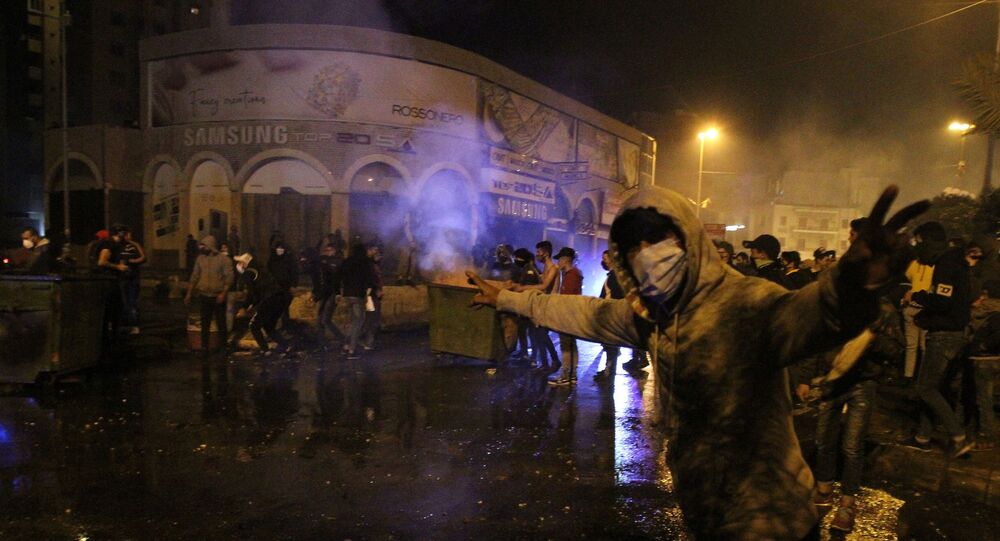 BEIRUT (Sputnik) - Protesters in the northern Lebanese city of Tripoli on Wednesday hurled Molotov cocktails at the city’s municipal headquarters as unrest continues into the third day.

Citizens of Tripoli, Lebanon’s poorest and second-largest city, have taken to the streets in protest of harsh living conditions wrought on by the economic crisis. The demonstrators are also protesting the coronavirus lockdown, claiming it has impacted their livelihoods.

During Wednesday protests, according to a statement made by the Lebanese Internal Security Forces, at least 9 law enforcement employees were wounded after demonstrators threw combat grenades at them, with one critically injured.

The Lebanese Red Cross said on Twitter that it has treated 67 people at the scene and transported 35 to local hospitals.

The tweet reads: "35 wounded have been transferred to hospitals in the area until now, and 67 injured have been treated at the scene."

​The protesters attempted to block major highways streets in the city using burning tires and garbage containers, but the efforts were quashed by the military.

Situation in #Tripoli #Lebanon deteriorating quickly. Protests that began 2 days ago against lockdown measures and 24 hour curfews to curb the spread of #coronavirus have disintegrated into gun fights. #LebanonProtests pic.twitter.com/d42VmWXJLv

Reports having been coming in of attempts to break into the central bank in #Tripoli as well as the municipal Serrail. Live ammunition is being used along with rubber bullets. #Lebanon pic.twitter.com/lXaJ14a36z

​The Tripoli city hall shows signs of damage but no ongoing fire. The previous night, rioters managed to burn a significant portion of one police station.

Authorities have recently prolonged a near-total nationwide lockdown, which was initially scheduled to end on January 25, through February 8 over the increasingly dire coronavirus situation in the country. Lax restrictions over the holidays saw large gatherings and parties held with little regard to the pandemic, which almost immediately resulted in a spike in infections from around 2,000 daily new cases to as high as 6,000. This has overwhelmed the country’s already feeble health care infrastructure.

Lebanon has been undergoing the most severe economic crisis in its modern history, with a bloated banking sector and endemic government corruption sending the currency tumbling down 80 percent of its value against the US dollar. Increasing poverty and unemployment have driven people to the streets, sparking a major opposition movement in October 2019, but although two governments have resigned, little has been done to address the root cause of the crisis.