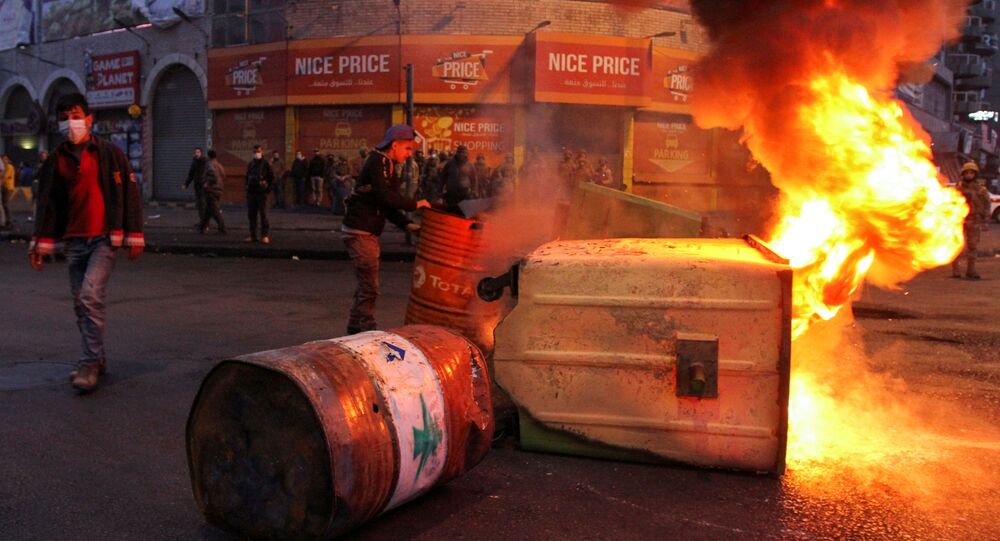 According to a Sputnik correspondent on the scene, several people have been injured in sporadic clashes with police outside the city hall.

Citizens of Tripoli, Lebanon’s poorest and second-largest city, have taken to the streets in protest of harsh living conditions wrought by an ongoing and worsening economic crisis. Demonstrators are also protesting the coronavirus lockdown, claiming it has impacted their livelihood.

Protesters have blocked major highways into the city with burning tires. Army units are being summoned to take up positions for the second night in a row.

Protesters gathered in 3 main streets army is pushing them back. #لبنان pic.twitter.com/tRyPENOdBo

Elsewhere in Lebanon, protesters blocked a major highway in the southern city of Saida as well as the main Masna highway connecting the Bekaa region to the Syrian border, national broadcaster Al-Jadeed reported.

Authorities have recently prolonged a near-total nationwide lockdown, which was initially scheduled to end on January 25, through February 8, over the increasingly dire coronavirus pandemic in the country. Lax restrictions over the holidays saw large gatherings and parties held with no regard to the pandemic, which almost immediately resulted in a spike of infections, from around 2,000 daily new cases to as high as 6,000. This has overwhelmed the country’s already feeble health care infrastructure.

Lebanon has been undergoing the most severe economic crisis in modern history, with a bloated banking sector and endemic government corruption sending the currency tumbling 80 percent against the US dollar. Increasing poverty and unemployment have driven people into the streets, sparking a major opposition movement in October 2019. Although two governments have resigned, little has been done to address the root causes of the crisis.