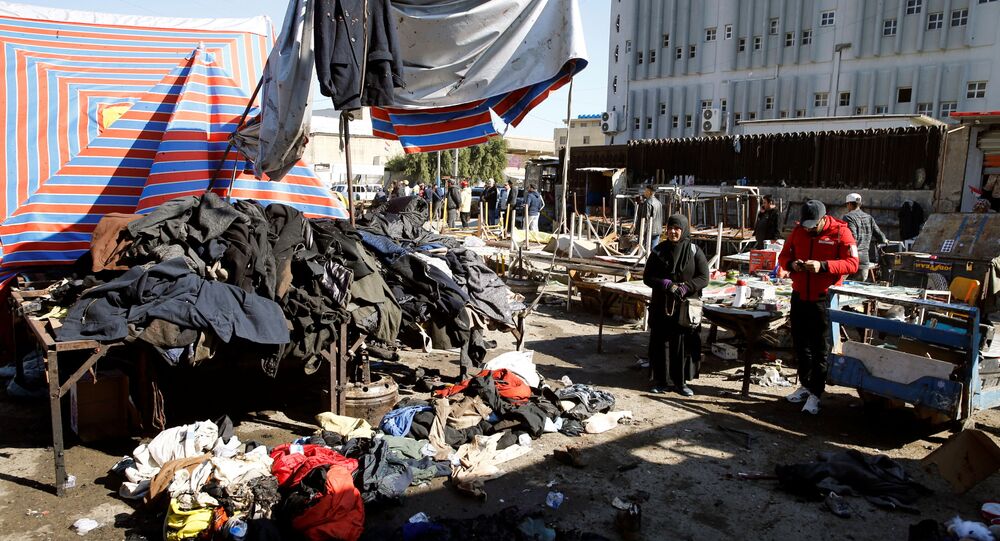 "Al-Kadhimi issues orders on major changes in the security services: the deputy interior minister for intelligence affairs, Lt. Gen. Amer Saddam, was dismissed from his post, and Lt. Gen. Ahmed Abu Ragheef was assigned to replace him," Rasool wrote on Twitter.

In addition, the director-general of the interior ministry's intelligence and counter-terrorism department, Abdul Karim Abd Fadel, the federal police commander, Lt. Gen. Jaafar al-Battat, and the chief of the intelligence and security department of the Baghdad operational headquarters, Bassem Majeed, were fired against the backdrop of the twin blast.

The head of the Baghdad operational headquarters, Qais al-Muhammadawi, has been transferred to another post in the country's Ministry of Defence, according to Rasool.

© REUTERS / Thaier al-Sudani
Twin Suicide Bombings Leave 28 Dead, 73 Injured in Baghdad, Iraqi Military Says
On Thursday morning, two suicide attackers staged explosions in the Bab Al Sharqi area of the Iraqi capital. After the incident, Rasool stated that the attackers were being pursued by the country's security forces when they detonated explosive devices.

Some 32 people died and 110 more were injured, according to a spokesperson of the Iraqi Health Ministry. Daesh* has claimed responsibility for the bombing.

The situation in Iraq has been highly unstable for years due to activities of the IS, which lost all the territories previously seized in the country but continues to stage attacks across the Middle East nation.