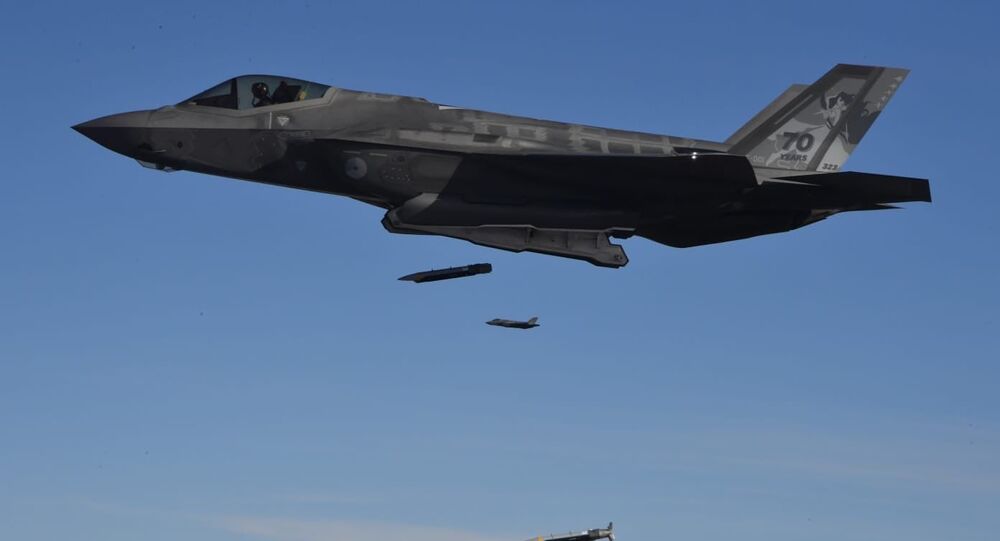 US President Joe Biden has pledged to end US support for the war in Yemen by the Saudi-led coalition that includes the United Arab Emirates (UAE), whose Western-bought weapons have been spotted in the hands of Yemeni militias, including Al-Qaeda in the Arabian Peninsula (AQAP).

Barely an hour before Biden was sworn into office, the outgoing Trump administration signed an agreement with the United Arab Emirates to sell the Persian Gulf country 50 of its Lockheed Martin F-35A stealth fighters.

The jets are part of a huge $23.3 billion weapons sale that includes 18 MQ-9B Reaper drones and a slew of anti-air and anti-surface missiles. While the final delivery schedule is unclear, drafts of the agreement stated deliveries would begin in 2027.

The possibility it might be able to buy the advanced fighter jet was a major part of Washington convincing Abu Dhabi to a historic rapprochement with Israel last September. Israel is presently the only Middle East nation that operates the F-35 and maintaining Israel’s strategic superiority to other nations is a key part of US policy.

However, critics accused the Trump administration of rushing the deal after the State Department gave its approval in early November. After Democratic lawmakers mounted a failed bid to block the sale, the New York Center for Foreign Policy Affairs announced a lawsuit against the State Department, saying the deal contained no provision to stop the UAE from sharing the F-35’s proprietary information with other nations.

The advanced jets sport not only a stealthy design and coating, but a slew of advanced avionics, computers, and sensors as well. Congress forced Turkey’s removal from the F-35 program in 2019 on news Ankara had also purchased Russian-made S-400 air defense systems. Pentagon leaders feared operating the two systems in close proximity would be too revealing of the F-35’s capabilities and weaknesses, of which Russia or other nations using the S-400 could make use.

The incoming Biden administration still has the ability to undo the last-minute deal, and during the transition period Biden’s team made clear their hostility to the slew of attempted “midnight rules” the Trump administration attempted to push through before he left office. Biden has already reversed some of them by executive order, including one move that legalized discrimination against transgender people seeking to use homeless shelters and certain other facilities that receive funds from the federal government.

Indeed, Biden has previously pledged to end US support for the Saudi-led coalition’s war in Yemen, of which the UAE is a key part.

Among other examples, Biden signed a 2018 open letter alongside his future secretary of state, Antony Blinken, and future director of national intelligence, Avril Haines, in which they called on then-US President Donald Trump to end US support for the Saudi war effort. He will likely have congressional support as well, since even the Republican-controlled Senate passed a 2019 resolution calling on Trump to end US support for the war, although in the end Trump vetoed the measure.

The war in Yemen has been raging since 2015, when ousted Yemeni President Abdrabbuh Mansour Hadi fled to Riyadh seeking help in defeating the Houthi movement, a Zaidi Shiite sect that revolted against government measures they claimed were exacerbating poverty in the already-poor country. The Saudi-led coalition, which includes the UAE and formerly included Sudan and Morocco, among others, began an intense bombing campaign and funneled support to friendly militias in Yemen, while also instituting a blockade that has allowed hunger, cholera, and COVID-19 to ravage the population.

The US has also supported the coalition, providing refueling services and targeting information for coalition aircraft and running Special Forces patrols against Houthi installations near the Saudi-Yemeni border.

However, the impact of Western support extends beyond logistics: investigations have revealed that weapons and vehicles sold to coalition allies have wound up in the hands of pro-Saudi militia groups, including AQAP, the terrorist group’s local franchise. That includes not only small arms but also mine-resistant, ambush-protected vehicles (MRAPs), tanks, and artillery pieces.